Instrumental virtuosity can be a mixed blessing, even if some of us would put it in the category of “nice problem to have.”

But spare a moment for the musical geniuses among us, except for the pianists, who can always thrive alone. If you’re Jimi Hendrix, though, you might live your entire life without finding yourself playing with truly worthy company. And if you’re Sonny Rollins, you might find yourself rolling the dice and hoping for the best any time you wander away from New York City and your regular band.

In May 1967—just weeks before Hendrix would drag two English journeyman musicians back to his home country—Rollins, age 36, was moving toward one of several sabbaticals he took during his long career. On his previous recording, East Broadway Run Down, released a year before, the saxophonist had been accompanied by four of the best musicians on the scene: trumpeter Freddie Hubbard, bassist Jimmy Garrison, and drummer Elvin Jones. Since then, Rollins had started gearing down before heading into a long respite at an Indian ashram, taking the occasional job on the road, where he’d rely on local promoters to match him with a suitable rhythm section. In the spring of 1967, he was offered several gigs in the Netherlands. For Dutch promoter Jaap van de Klomp, booking Rollins meant finding a bassist and drummer who wouldn’t be embarrassed onstage.

Along with John Coltrane—who would succumb to liver cancer two months later—Rollins was not just a technical giant on the tenor; he was ferocious in his virtuosity. Content to stand onstage as the lone lead instrument and able to spin out chorus after chorus of complex improvisations, Rollins had an attitude and abilities that begged comparison to athletic heroes. Since his early 20s, Rollins’s friends had called him “Newk,” a reference to his resemblance to baseball pitcher Don Newcombe. A more apt comparison might’ve been to the indomitable Cleveland Browns running back Jim Brown; Rollins was a warrior who refused to take prisoners when he had his saxophone mouthpiece between his lips. And, as if that weren’t enough, Rollins was (and, at 90, continues to be) a man of towering intellect. His improvisations could flit between ideas like a bat, and he loved to interpolate musical references in his melodic development. Like Brown, when Sonny had the ball, he might run over you, or he might suddenly juke around you and leave you looking like a fool.

Van de Klomp felt he had the situation in hand, although the combination of conservative bassist Ruud Jacobs and experimental drummer Han Bennink might seem like a disaster-in-waiting on paper. Although Jacobs and Bennink were contemporaries in the burgeoning jazz scenes of Utrecht and Amsterdam, they had followed much different paths. Gifted with a gorgeous, resonant tone, Jacobs had drifted toward the types of gigs that required a tuxedo; Bennink was an iconoclast who included a pig bladder in his drum kit and was fond of shouting during his solos. Just prior to the Rollins visit, the drummer had formed the Instant Composers Pool with his friends Misha Mengelberg and Willem Breuker—a band that would set the standard for the European avant-garde over the next three decades. 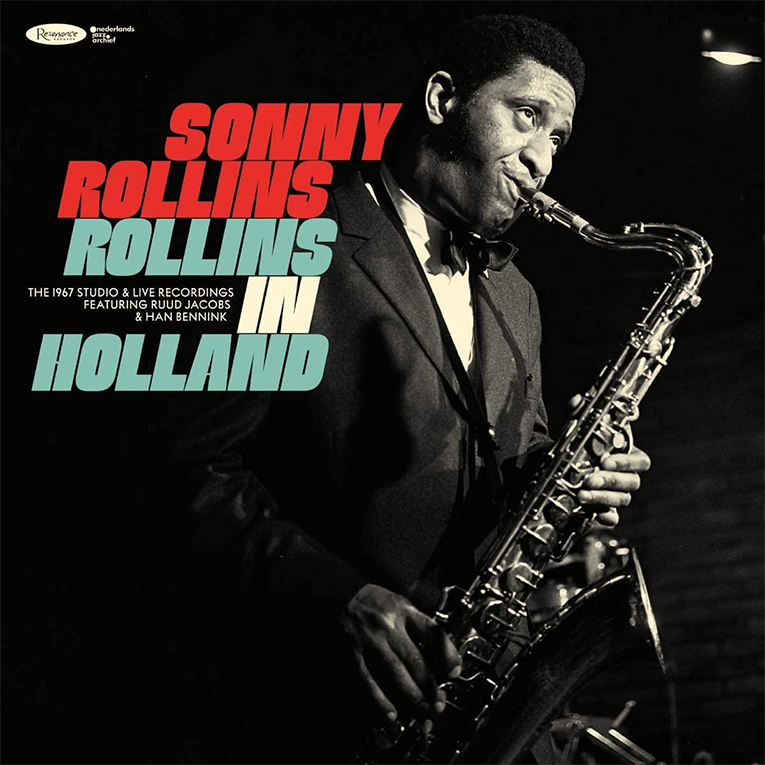 To his credit, as he explained to Rollins in Holland producer Zev Feldman for the 100-page booklet included with this album, the saxophonist was willing to overlook their differences. Like with so many things in his long, rich life, Rollins made a great call; Jacobs and Bennink provided exemplary support. Recorded at three venues on two days, the 130 minutes of music on these two discs find Rollins at his peak, and his rhythm section never lets him down.

In fact, the divergent approaches of Jacobs and Bennink gave Rollins a broader canvas than he might have normally found in any rhythm section—let alone in a pickup band—and Jacobs’s austere sound and Bennink’s exuberant attacks deepened the musicality of the saxophonist’s choice of compositions. By 1967, Rollins had a handful of songs that had become associated with him, including Miles Davis’s “Four,” the Gershwin brothers’ “Love Walked In,” and his own “Sonnymoon for Two.” These gigs included two versions of “Four”—one that covers five minutes on a radio broadcast and a much more discursive performance that lasts 22 minutes—and three of “Love Walked In.” There are also superb renditions of the Gershwins’ “They Can’t Take That Away from Me,” Rodgers and Hart’s “Blue Room,” Davis’s “Tune Up,” and a couple of jazz standards.

On May 3, the trio began its short life, without a rehearsal, in Arnhem at the city’s Academy of Visual Arts before a crowd of about 200 people. The concert is sequenced out of order and stretched over both discs, but that matters little; Rollins attacks each piece as if it’s a musical puzzle to be solved. He hits maximum velocity with his first notes and follows his own logic as he builds and manipulates the momentum, reaching into his bottomless trick bag to pull out snatches of Nat Adderley’s “Work Song,” his own “St. Thomas,” and even Wilson Pickett’s “Land of a Thousand Dances.”

According to Bennink’s remembrances, Rollins was pacing across the makeshift stage relentlessly, but his saxophone is always the center of attention. While Bennink’s drums don’t lack for volume (anyone who has ever seen Bennink play knows that his snare strikes are the loudest of any contemporary drummer), the sound dynamics are not great. It’s difficult to discern which drum he’s striking—let alone whether he’s hitting a pig bladder—and Jacobs’s bass is almost completely lost in the mix.

Those sonic shortcomings matter little; this is Rollins’s show, despite how well Bennink and Jacobs acquit themselves. It’s an astounding demonstration of the breadth of Rollins’s imagination and strength.

Two days later, the trio arrived at VARA Studio 5 in Hilversum for a recording session organized by NCRV Radio. They’d played another gig at the Go-Go Club in Loosdrecht the previous night, so they were now well familiar with one another. The soundstage is as meticulous as one would expect from a European broadcaster, and the musical approach is also miles away from what the band played in Arnhem. 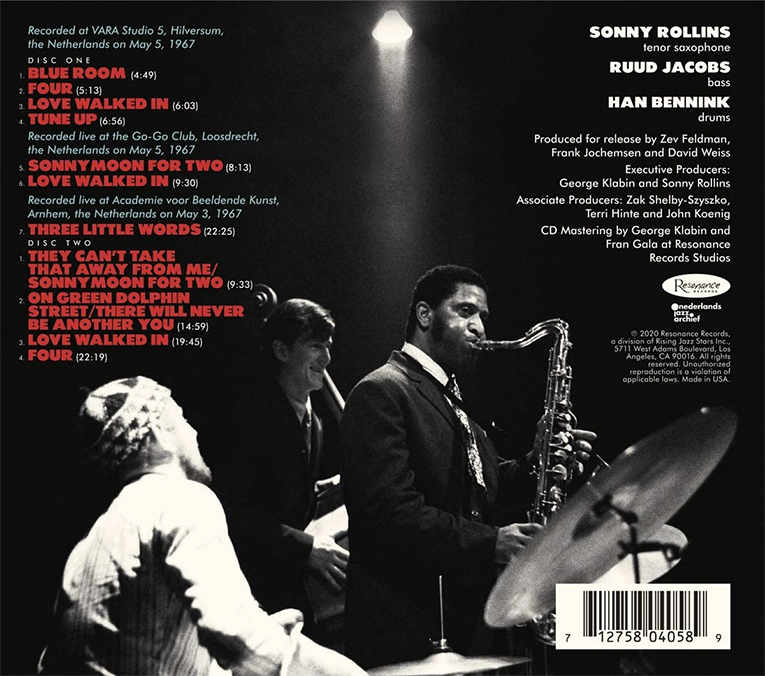 Rollins begins with “Blue Room,” his sound heavily reverberant in the studio, and Jacobs’s polished tone is finally evident. Bennink displays his mastery of brush playing and his ability to drop astonishingly crisp accents in just the right places. While “Four” takes the pace up, the overall mood of the session seems to match the mid-morning start time—easy grooving with some deep explorations of the harmonic possibilities of this great material.

That evening, the trio returned to the Go-Go Club, this time with television cameras present, for what might be compared to Bob Dylan’s tour of the UK and Europe the previous year. In his extensive notes on the concerts, Rollins biographer Aidan Levy documents tepid applause and at least one request from the audience for Bennink to stop playing. Rollins had changed course so often in his career to that point that no one was quite sure what to expect of him.

Despite the less-than-enthralled audience and the formal atmosphere of a TV taping, the band charged ahead. While not as one-dimensional as at the Arnhem concert, the sound favors Rollins again. As outlined in the notes, Dutch audio engineer Theo Koch recorded the show when it was broadcast on May 6, and his reel of tape had never been digitized. While not perfect, the recording captures three musicians who have found common ground in very short order having a lot of fun. Also captured is one of Rollins’s signature solo cadenzas, a rollicking, multi-layered opening to “Love Walked In,” and some wonderful interplay between Rollins and Bennink.

Once again, Feldman deserves kudos for persevering with this project, seeing it through from the unlikely discovery of unknown tapes to ensuring that all the legal hurdles were cleared. Like so many of the Resonance heritage projects Feldman has pursued, this adds vital information to a lesser-known chapter in a singular musician’s life.