Cindy Blackman Santana: "Give the Drummer Some"

At 60, drummer Cindy Blackman Santana has had an exceptionally varied career that has seen her perform at both massive arenas and tiny clubs. The former came courtesy of her long tenure with singer-guitarist Lenny Kravitz, whom she first played with in 1993, the latter from her long apprenticeship as a jazz musician. In an interview, she once told me that the primary difference was what happened before and after the shows.

“With Lenny, it’s like going to a bowling alley,” she said. “You just bring along your shoes and everything else is taken care of. When I lead my own groups, I carry my own drums.”

That, of course, was before she married guitarist Carlos Santana in 2010, a relationship that has given her even higher prominence than Kravitz could, and has rejuvenated her husband’s music.

Blackman Santana’s drumming has sounded as varied as her recording and performing credits. A native of Ohio, she moved to Connecticut in her teens to study in the jazz program run by the renowned alto saxophonist Jackie McLean, spurred by her attraction to the work of drummer Tony Williams. Williams, who rose to prominence as a teenage member of Miles Davis’s quintet in the 1960s, was a model for both his light, quicksilver touch and his ability to bring a big beat to pioneering electric jazz-fusion groups like Lifetime.

She studied at the Berklee School of Music with Alan Dawson, who was Williams’s teacher, and after moving to New York City sought out other established drummers like Elvin Jones, Art Blakey, and Al Foster as mentors. As a young woman on the scene in the ’80s, she was a curiosity -- and a target for the sexism rampant in the business -- but she also quickly became a valued collaborator.

Still, it took her employment with the rocker Kravitz, who was just about to peak with his breakout hit “Are You Gonna Go My Way,” to draw attention to her fine solo work on labels like Muse and HighNote.

Suitably, her decade-long relationship with the veteran Bay Area bandleader and guitar hero has given her the best of both worlds: a high-profile gig in a band that continues to headline around the world (when such things are possible) and the opportunity to collaborate closely with a musician who worships jazz heroes like Davis and John Coltrane. 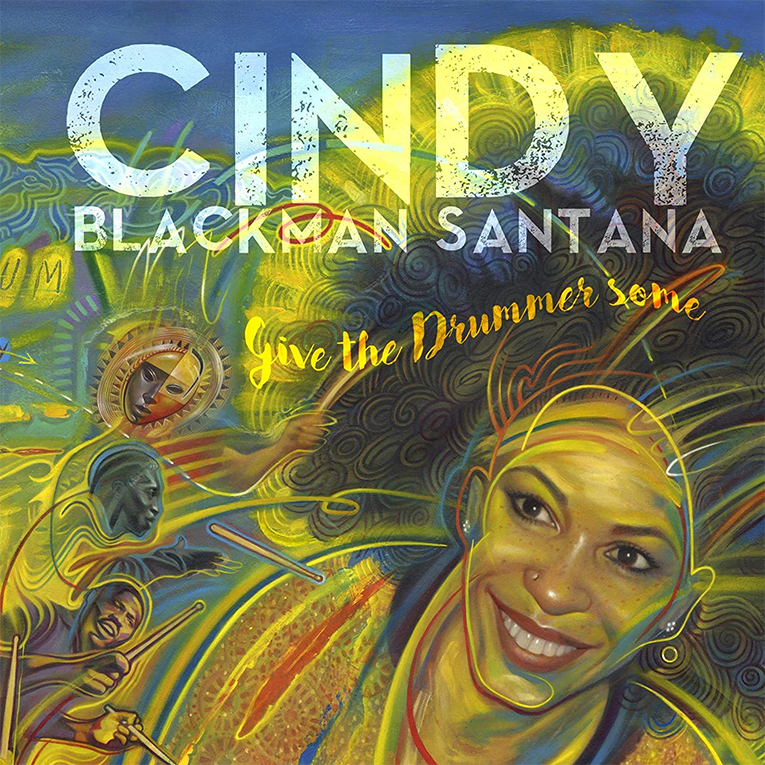 What hasn’t been prominent in her music to this point is Blackman Santana’s love of dance music and R&B, but there’s no doubting it after hearing Give the Drummer Some, which might also be called Give the Drummer the Microphone since it marks her debut as a vocalist.

Developed in concert with veteran R&B producer Narada Michael Walden, Give the Drummer Some shifts between slamming club grooves, slippery electronic jams, and shredding guitar improvisations. As a physical album, it raises the question of whether there’s a single listener who will be attracted to all of its 17 tracks. As a collection of streamable “singles,” it’s probably strategically wise marketing. There is literally something for every taste -- provided you like dominant drums and howling guitars.

While I’m far from a habitué of dance clubs, I appreciate great club music, particularly when it avoids banal lyrics like “Get woke, y’all”; “Get your groove on”; and “Gonna start this party.” Those kinds of dancefloor platitudes litter this album and distract from the superior musicianship that fills every track. Just a list of the guitarists present -- Santana, John McLaughlin, Vernon Reid, and Kirk Hammett -- is sufficient to illustrate the level of the playing.

Blackman Santana’s delivery of those banalities is pleasant enough, as much as one can judge in the era of vocal manipulation. On the opening interpretation of John Lennon’s “Imagine,” for example, her voice is certainly closer to Prince than Yoko Ono, and after all, she’s not crooning long-form ballads; she’s exhorting you to get up, shake it, and support world peace.

Dancefloor bangers like “Change Is in Your Hands” and “Fun Party Splash” come with the bonus of exceptional guitar playing, and even those like “She’s Got It Goin’ On,” which lack a pivotal musical moment, benefit from Walden’s skill at layering multiple keyboards, basses, and drum tracks.

More problematic is “You Don’t Wanna Breaka My Heart,” a soulful power ballad where the heft of the drum sound runs counter to the lyrical content. In effect, with drums this bombastic, the title comes across as more of a threat than a plea.

Another sidestep is “Miles Away,” co-composed by and featuring trumpeter Bill Ortiz, doing his best Davis imitation on muted horn. It’s a pleasant diversion, especially with Davis’s former bassist Benny Rietveld onboard, but it breaks the flow of the opening onslaught.

Which takes the listener to the heart of the matter: the handful of tracks that revolve around the guest guitarists. For McLaughlin fans especially, Give the Drummer Some is a gift. Like Peter Frampton, the iconic guitarist -- who’s now 78 -- has faced health issues that have threatened his career, and his appearance here comes as a surprise. On “We Came to Play,” joined by the exceptional bassist Matt Garrison, McLaughlin sounds like he hasn’t lost a step. In fact, the riff-based performance sounds like something from the original Mahavishnu Orchestra, with Blackman Santana delivering a massive sound. McLaughlin, whose early career found him backing the likes of Petula Clark, mixes it up on the joyful “Superbad,” which is notable for the shout-out Blackman Santana gives him. 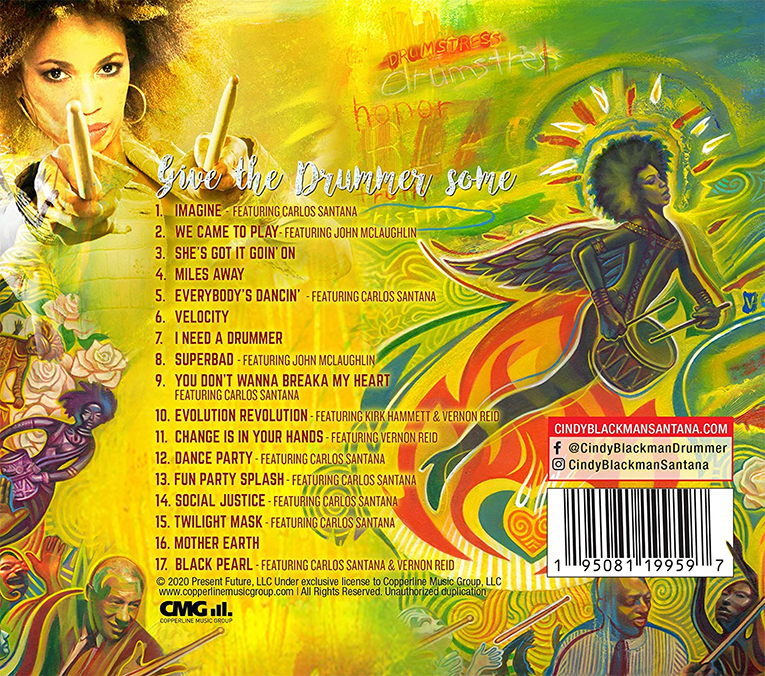 Carlos is featured on a nine-minute lo-fi electronic exploration called “Twilight Mask” and his composition “Black Pearl,” a gorgeous duet with Reid that’s the closest the album moves to jazz.

For the shred fans, “Evolution Revolution” throws Vernon Reid and Hammett together and lets them battle it out for six-string supremacy. At times, it does, in fact, sound like Living Colour and Metallica accidentally wound up onstage together.

Setting aside the annoying aphorisms about getting your groove on in the peace parade, it’s hard to find a false note here, but Give the Drummer Some does balance on the precarious fulcrum between providing something for everyone and pleasing no one.