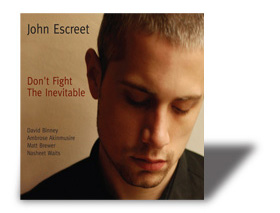 Escreet's music is inventive, powerful, and even frightening at times. Throw in his virtuoso playing and it seems that the overused adjective awesome has found a worthwhile use. His backup band, the John Escreet Project, comprises musicians (David Binney on alto saxophone/electronics, Ambrose Akinmusire on trumpet, Matt Brewer on double bass, and Nasheet Waits on drums) who keep up with him not as background but as co-conspirators, and the ensemble's hair-raising virtuosity is breathtaking.

There's a sixth voice in "Charlie in the Parker," as a recording of Parker's spoken voice has been woven into the track: "Music is basically harmony, melody, and rhythm; people can be descriptive in all kinds of ways." Parker was instrumental in changing the face of jazz, and his inclusion here is a tribute to innovation and an affirmation that Escreet will keep its torch burning. The recorded sound is full and appropriately reverberant without losing any detail, and that's no small accomplishment since there are a so many subtleties here that could easily get lost in the often cacophonous mix.

Be sure to listen to: The striding opening and chord progressions of the first cut, "Civilization on Trial," which might remind the astute listener a bit of John Carpenter's Halloween score. That reference is quickly banished by an insistent rhythmic motif but then reappears under a new guise. For once the opening track on an album really sounds like a curtain raiser.