Wes Montgomery: "In the Beginning"

One of the few authentic things in Don Cheadle’s gangster-fantasy bio-pic of Miles Davis is the trumpeter’s insistence that jazz was, first and foremost, social music. In the years before, during and after World War II, in particular, jazz was the soundtrack of black American lives. Before the rise of urban blues and R&B in the ’50s, it was jazz that was played on commercial jukeboxes in bars, on record players at house parties, and by combos at live music venues. It was, quite literally, ubiquitous in the air, especially in the large, industrial centers. In Indianapolis, Wes Montgomery started strumming a four-string tenor guitar at the age of 12, and seven years later, in 1942 -- inspired by brilliant, young guitarist, Charlie Christian, who died around that time -- switched to a full-size electric guitar.

Together, Christian and Montgomery would serve as the primary influences on jazz guitarists until Jimi Hendrix and John McLaughlin surpassed them in the ’60s and ’70s.

What also ties Christian and Montgomery together is the brevity of their careers, which made the pervasiveness of their influence all the more remarkable. 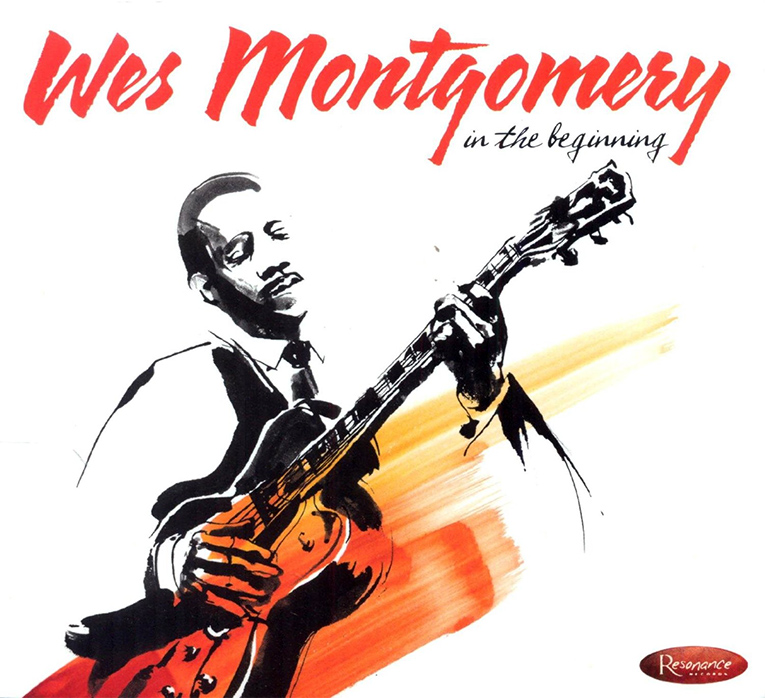 Born March 6, 1923, Montgomery joined Lionel Hampton’s band for 18 months in the late ’40s, at the age of 25, largely on the strength of his ability to mimic Christian’s fleet, single-note runs, but retreated in 1950 to focus on his factory job and his rapidly growing family, which would eventually number seven children. The bulk of his recorded work took place in the decade between 1957 and his premature death, from a heart attack on June 15, 1968.

But although Montgomery did not develop a recording career as a leader until the late ’50s, starting in 1954 he maintained a very active schedule -- performing as frequently as he could with his brothers: electric bass pioneer Monk, two years older than Wes, and pianist Buddy, who was born in 1930. In 1954, Monk had just returned from two years on the road with Hampton. Along with their sister Lena, Monk, Wes, and Buddy rented a house on Kenwood Avenue in Indianapolis, bought an upright piano, and launched a band with saxophonist Alonzo “Pookie” Johnson and the unrelated drummer Sonny Johnson.

From the start, the band was something special -- a talented unit that could easily navigate the challenging changes of bebop, with a co-leader in Wes who could rival bop heroes like Charlie Parker and Dizzy Gillespie for harmonic complexity and melodic fluidity. The Montgomery-Johnson Quintet quickly established itself as the city’s leading purveyor of social music, first within Naptown -- Indianapolis’s black neighborhood -- and then at the segregated white Turf Club on West 16th Street, just east of the Indianapolis Motor Speedway. The quintet started with a two-week engagement, but wound up being the house band -- often accompanied by Debbie Andrews, a former vocalist with the Duke Ellington Orchestra -- for two years.

While there are recordings of Montgomery with the Hampton band, there has been scant evidence of how he evolved his distinctive signature sound -- which featured extensive use of octave voicing and a round tone that resulted from him picking with his bare thumb -- and what he sounded like in small ensembles during the important period of 1949 to ’57. In the Beginning includes six separate recording dates from 1949 and 1955 to ’59, including more than an hour of music from four separate nights at the Turf Club, three tracks from the better-known Missile Lounge, and an incendiary version of “All the Things You Are” featuring Pookie Johnson from Chicago’s C&C Music Lounge. Also featured are three tracks with Montgomery as a sideman in 1949, a 1956 home recording with Montgomery playing bass instead of guitar, and a previously unheard 1955 New York City studio session featuring the Montgomery-Johnson Quintet that Quincy Jones produced for the fledgling Epic Records.

Given the sources, fidelity is not exceptional on any of the material. Even the 1955 session, although recorded at Columbia Records’ famed 30th Street Studio -- site of Miles Davis’s Kind of Blue and so many other landmark recordings -- sounds anemic. But the sonic quality is beside the point here; this is about sleuthing around how one of the most iconic figures in postwar jazz discovered and evolved his voice. In each of the recordings here, Wes’s guitar is distinct and clear, and all the instruments are audible, if not robust sounding.

As on the handful of Hampton recordings that feature Montgomery, there is little in the three tracks cut for Fresno, California’s Spire Records in 1949 that show that you are hearing anything more than a very talented technician with a quick set of hands. The quintet is competent, but nothing special. Still, the tracks are exceedingly rare -- even the Library of Congress does not have copies -- and their inclusion here illustrates the kind of dogged work that Resonance Records producer Zev Feldman has become known for.

While the 1949 quintet may not have been memorable, the Montgomery-Johnson Quintet surely was, even if co-leader Wes and his brothers had not gone on to greater things.

As he explains in his contribution to the expansive liner notes in the package, Jones was well acquainted with Monk from their time together in Hampton’s band, and he knew Wes by reputation. As a young producer for a new label, Jones was looking to make a splash, so he took a chance on the brothers’ new regional band. It is clear from the opening Wes-penned song, “Leila,” that the band had chemistry going for it. You can hear Wes trying out some octave playing, and while his style has not yet matured, the elements are beginning to coalesce. While one track, “Love For Sale,” was released in 1983 on a Columbia collection called Almost Forgotten, the other tracks from the session have been sitting unreleased in the vault for 60 years.

While the Montgomery-Johnson Quintet may not have had the polish and energy to make it out of the studio in 1955, their long stand at the Turf Club shows them setting the bandstand on fire night after night. On period standards like “After You’ve Gone” and “Fascinating Rhythm,” the band demonstrates a high degree of professionalism and an innate ability to swing hard. Monk’s sure touch on the electric bass is notable, and while he is still soloing using single notes exclusively, Wes is remarkable for his dexterity and imagination. 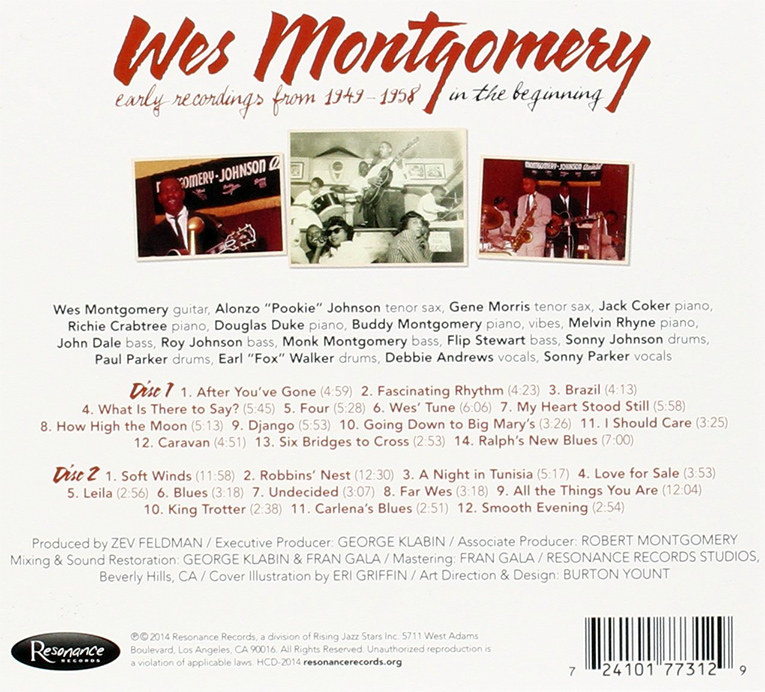 One piece, “Wes’ Tune” from August 25, 1956, illustrates a more forward-looking approach, with harmony more in keeping with Tadd Dameron than demonstrated on some of the standards adapted to bebop. It is no surprise that Montgomery held onto the tune and resurrected it on a Pacific Jazz album under his own name in 1959.

Also of note is the rollicking, bluesy number “Going Down to Big Mary’s,” featuring solid vocals by Andrews -- the kind of R&B piece that kept things rocking at the Turf Club.

It was at the Missile Lounge in 1958 that Cannonball Adderley heard Wes -- an encounter that led the saxophonist to recommend the guitarist to producer Orrin Keepnews -- and the three tracks from November 22 of that year are likely illustrative of what Adderley heard. The performance of “Soft Winds” -- accompanied by pianist Melvin Rhyne, bassist Flip Stewart, and drummer Paul Parker -- illustrates how far Wes had moved. His use of octaves is now prominent, making him a much more distinctive and modern-sounding player. A blazing take of “A Night in Tunisia” from the same evening, but with Monk on bass and Richie Crabtree sitting in for Rhyne, shows the full signature Wes sound, with him seamlessly alternating octave playing, single-note runs and breathtakingly fast chordal work. Suddenly, he has a much more varied attack, along with a deeper, rounder, and more measured approach to playing.

In the space of a decade, he has moved from an exciting-yet-derivative player to an absolute original. It is an astonishing transformation, and it is laid bare in this highly entertaining two-CD set.