In an earlier, less-cluttered musical era, Ryan Adams would be a much bigger star. He has the charisma and the songwriting chops of Bruce Springsteen and Tom Petty, but, at 40, he is a generation younger and remains a cult favorite -- far from a household name (except, perhaps, for those who confuse him with Bryan Adams). In some quarters, he is best known as the romantic partner of quirky women like indie-film diva Parker Posey and actress-singer Mandy Moore.

Adams has not helped his cause much -- moving into the public eye as a member of a country-leaning band (Whiskeytown) before forming another group (the Cardinals) that was more of a backing band, and then launching a truly solo career that has veered into metal and hip-hop, and occasionally been sidetracked by personal issues like drug addiction and Ménière's disease. At his core, though, Adams has distinguished himself as a songwriter who has not been afraid to be introspective -- even when that introspection led to revelations that were not particularly attractive. Like Jason Isbell -- a contemporary and friend -- Adams also has the ability to write in the vernacular, sounding conversational and intimate while revealing simple truths.

What's more, Adams is not afraid to perform his simple, truthful songs without the cover of more than just his guitar, piano, harmonica, and sweet, lightly Southern-accented voice. He rocks hard when he performs with his band, but onstage at Carnegie Hall on November 15 and 17, 2015, he stood alone.

That two-night stand -- a total of 35 songs -- was released as a single package, which was comprehensive enough to be viewed as something intended for his fan base. For others, this single-disc collection of ten tracks, split evenly between the two nights, provides an ideal introduction to Adams's solo career to date. There are early hits like "Oh My Sweet Carolina" (2000) and "New York, New York" (2001) and more recent songs like "Kim" and "My Wrecking Ball," which were both recorded for his 2014 self-titled album.

To judge only by the material included here, opening night was the quieter of the two. Both the opener, "Oh My Sweet Carolina," and the following "Nobody Girl," a song co-written with British producer and drummer Ethan Johns, are starkly presented, with spare, quiet guitar accompaniment. When a handful of fans erupt at the opening line of "New York, New York," it has the effect of someone turning on a spotlight. He wisely switches things up by shifting to rudimentary piano for the wry "Sylvia Plath."

He is also intelligent about how much between-song monologue he allows in, saving it until the introduction to the eighth song -- "How Much Light," a song he held back until April 2015 because he felt it was too "sappy." 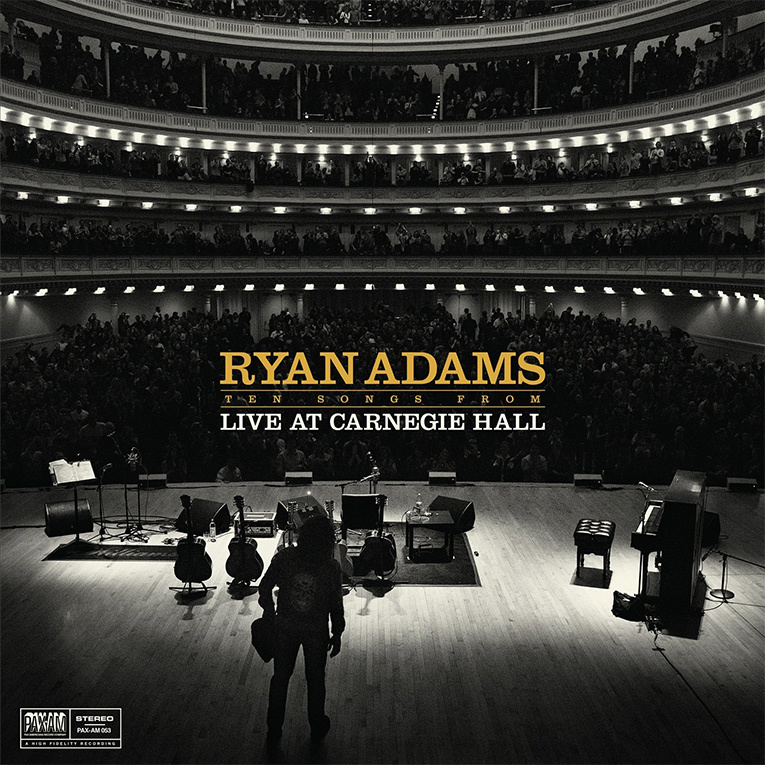 But much of Adams's charm is to be found in his self-deprecating stage banter. No one else except Adams and Steve Earle can endear themselves to an audience by discussing their own emotional fragility onstage. Here, Adams jokes that "at least 86 percent of you are on Paxils (sic) for depression or something . . . you're at a fucking Ryan Adams show."

Best of all, he paces these ten songs like they formed a complete concert, building to the release found on "Come Pick Me Up," which, with its entreaty to his girlfriend to sleep with his friends behind his back, is as self-deprecating, funny, and psychically damaged as Adams gets.

Taking advantage of the exceptional acoustics of the venue, the recording approach of engineer Charlie Stavish is to maintain the verisimilitude of the setting, which sacrifices some balance between the sound sources for more background noise. That might disturb listeners who find the fingers-on-strings squeaks of "This Is Where We Meet in My Mind" obtrusive, but it also allows you to enjoy the easy rapport Adams has with a fan who thanks him after "How Much Light."

It is that kind of give and take, and the passing of inspiration between artist and fan that makes Adams unique. He just has to expand his audience now.