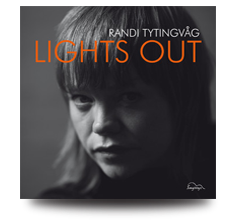 A true international sensation, Randi Tytingvåg is a Norwegian singer who records in Germany and sings in English. She has a style that is completely her own. You simply can't peg it, since it contains elements of jazz, cabaret, and pop put together in a unique and effective manner. Her first album, Red, was a huge hit, and it brought her to the attention of American listeners through Ozella Music, a German audiophile recording company.

Sadly, Tytingvåg lost her unborn child last year, and she has expressed her sorrow in Lights Out, a moving and inspirational EP. On this disc's four cuts, she has expanded her range of influences to include folk and blues. A mournful banjo and wistful harmonica are included in the instrumentation of her small accompanying group, and the recording remains very intimate.

Tytingvåg found solace and understanding in a text by author Per Fugelli from his book Døden, skal vi danse? (Universitetsforlaget). It also serves as the introduction to "Light Grey," the final song on the disc: "Health and sickness, life and death are not fire and water. They are twins who should walk hand in hand. We must work our way out of the misconception that sharply divides humans into the healthy and the sick, the normal and the abnormal, the winners and the losers. Instead, we should meet each other honestly as human blends.”

Tytingvåg addresses this head-on in "Blind Ignorance," the opening song:

Sorrow is determined
I won’t fight it, there’s no way I can win
When it knocks on my door and lets itself in
Demanding me to face life's twin

Lights Out is not a morbid disc. It's as serious as can be, of course, but it offers hope and resolution for a topic that's usually repressed, often at the expense of mental health. As usual, Ozella has provided clean and clear sound that has enough warmth to be exceptionally appealing. Balances between voice and instruments are perfect.

One can but admire Randi Tytingvåg's courage in releasing this album and sharing hope with all of us, but especially those of us who might have lost a child.

Be sure to listen to: I find the way that Tytingvåg and backup singer Dag Sindre Vagle touch the top notes in "Blind Ignorance" without whooping them makes them very chilling and special.