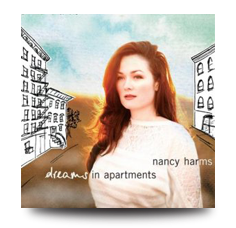 Nancy Harms hails from small-town Minnesota and has developed a sophisticated performing style that couples nicely with a sweet, direct personality. She has a marvel of a voice that will do anything she asks of it. It can be sweet and simple or sultry and dark. She colors her voice to suit whatever a particular song demands. She has a sure sense of both rhythm and pitch and can float some high notes that would make an opera singer jealous.

For Dreams in Apartments, Harms, having moved to the Big Apple, assembled a stellar group of New York musicians and came up with a first-rate song list that includes four of her original songs (written together with jazz-everyman Arne Fogel) and six standards. Things get off to a good start with Harms and Fogel's “Weight of the World,” a declamatory song urging one to get going again after difficult times. This is followed with a haunting version of Johnny Burke and Jimmy Van Heusen’s “It Could Happen to You.” Harms is partnered on this cut only by Aaron Parks’ sensitive piano playing. The two take the usually up-tempo tune at a leisurely and intimate pace with Harms seeming to breathe the opening notes most effectively.

A beautiful version of “Mood Indigo” brings back Danton Boller’s bass and RJ Miller’s drums for a version that can hold top place with just about any other. Hearing is believing as this excellent video illustrates. “Mood Indigo” is followed by Another Harms-Fogel tune, “And It’s Beautiful,” which offers one of the most effective descriptions of a transition between old and new loves that I’ve ever heard.

Two more originals, “Out of Comfort” and “Something Real,” are put on tracks 7 and 8. The former shows off some of those beautiful, high, sustained notes that Harms can produce, but true to the title, things get deliberately uncomfortable as guitarist John Hart starts producing distorted tones and he and the other musicians start playing against the vocals. “Something Real” is the familiar story of the girl who has heard all the pickup lines and wants to find something better. “While We're Young” closes the program, coming right after a very fine version of “Midnight Sun.”

The recording is fairly well balanced most of the time and is very warm and complimentary to the vocals, but I could have used more definition from Boller’s bass. The tones are fine, but it’s hard to hear the attacks, which makes the sound a bit more homogenized than it need be.

Nancy Harms is a singer who is sure of herself and has fresh insight into standards. She has an amazing voice and very good compositional talent. If that’s not enough, she did the effective black-and-white drawings that grace the panels of the Digipak case as well as the disc label. If she’s heard by the right people her star should continue to ascend.

Be sure to listen to: “And It’s Beautiful” features playing by trombonist Wycliffe Gordon. Seldom have I heard such beautiful playing in the instrument’s high register. The final high note will take your breath away.