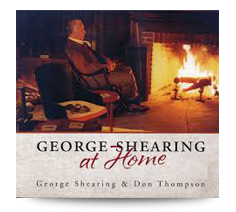 George Shearing became practically a household word when the pianist was under contract with Capitol Records. His recordings comfortably crossed the line between pop and jazz and sold exceptionally well. He was often backed by strings, and did some significant duo albums with Nat King Cole and Nancy Wilson. No doubt, album titles such as Latin Lace, Latin Affair, Beauty and the Beat! (a duo album with Peggy Lee), White Satin, and Black Satin (with voluptuous female models on the cover) helped ease the public's fear that they might be buying a jazz album.

Duos were a preferred scoring for Shearing throughout his career, as he felt they allowed him greater personal expression. Around 1983, Shearing played duet dates in New York with Canadian bass player Don Thompson, and he had the idea that the two might just set down some tracks from Shearing's living room "just for fun." According to Thompson, "we'd play a couple of tunes, have a cup of tea, and play some more."

Shearing had left Capitol Records at the time and was under contract to Concord Jazz, which didn't want to release anything their engineers had not been involved with. So the tapes languished in obscurity until this year, when they were finally released as George Shearing at Home.

I've heard most of Shearing's studio recordings, and I heard him live a few times at Blues Alley in Washington, D.C., so I was eager to hear this intimate set for two players. I can truthfully say that I've never heard a bad gig from Shearing. Many of his studio sets are staples of my jazz collection, and this one is as good as any. Perhaps better, as it is so intimate and it allows the two musicians to really enjoy playing with each other without pressure. It opens with a version of "I Didn't Know What Time It Was" that is set forth as a jaunty and playful caprice. That same smiling approach is given to "The Girl Next Door" on the eighth cut.

"A Time for Love," "The Things We Did Last Summer," and "That Old Devil Called Love" receive romantic readings that blur the genre lines between pop and jazz more successfully than I've ever heard in this repertory. With Shearing and Thompson you aren't sitting there ticking off whether it's "jazz" or "pop" or whatever; you're just reveling in some of the most beautiful music making ever recorded. The show is mostly Shearing's, but Thompson's contribution is significant and he turns in some virtuoso playing of his own, heard to best effect in his own composition, "Ghoti." Speaking of virtuosity, Shearing had such incredible technique that he could make the most difficult passage ever played sound like a walk in the park.

Shearing has four tracks that are entirely his on solo piano. My favorites of these are "Laura" and "I Cover the Waterfront," both of which are made into five-minute ballades. In his notes Thompson says that another solo spot, "Beautiful Love," marks the only time that Shearing ever played the piece. With its lovely cascading passages, it makes an appealing exit track for the album.

I have to add here that George Shearing at Home sounds in no way like an amateur audio project. This is amazing when you consider what Thompson says: "We made a trip to a music shop, rented four microphones and some preamps, and bought four reels of tape. George had a four-track reel-to-reel recorder, and I figured that would be all we'd need." They surely picked the right mikes and placed them in the correct positions. George Shearing at Home sounds like two great musicians playing in your living room, as natural as can be. It's a must for any serious jazz library, and for those who just love great, mellow music making.

Be sure to listen to: Charlie Parker's somewhat angular "Confirmation" gives Shearing and Thompson some material for back-and-forth declaration, and it's perhaps the most dramatic work on the disc.