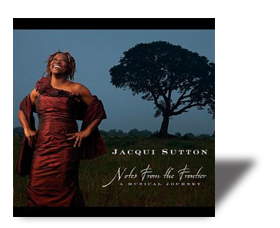 That sort of reinvention should come as no surprise if you're familiar with Sutton's first album, Billie & Dolly, a tribute to her favorite singers, Billie Holiday and Dolly Parton. That set, like this one, mashes up jazz, bluegrass, blues, pop, and even a little soul and classical. Artists who come up with a new style that works well for them are to be commended, but it keeps music critics hopping, trying to figure out what to call it. In this case Sutton has saved the day by naming it herself. She calls it "frontier jazz," and her unusual and very talented backup band is called the Frontier Jazz Orchestra. Orchestra? Relax, the only strings in the six-member ensemble are cello and bass. In Sutton's world everything is not always as it seems on paper, but it's exactly right when heard.

After "Summertime," Sutton launches Lee Hoiby's "Lady of the Harbor" as an American anthem, revealing that America is at the heart of her style. What is American music? Well, jazz. But if you want to know how deep and how far afield jazz goes, listen to Notes from the Frontier. In this piece and in one other, Sutton uses some operatic chops to float some pretty sensational high notes. But hey, Sutton has a great voice with tremendous range and power, so she can pull off anything she desires.

Next, Sutton mixes the bluegrass tune "Hummingbird" with Dave Brubeck's "Blue Rondo a la Turk." She then moves on to "Jenny Rebecca," a sweet song that Barbra Streisand sang in her earlier days. Other songs include "Nature Boy," "Dear Friend" (yes, multitalented Sutton does musical theater, too, but with a special twist!), and "Where the Music Comes From" (Another Lee Hoiby concert song), closing with "Better Than Anything," the second verse of which gives Sutton a chance to reel off a long list of jazz greats.

Sutton and her musicians are based in Houston, and this disc proves not only that Texas has great musicians but also that Stormy Cooper Media is a first-rate studio for recording and mixing. The sound is full and rich, due in part to the combination of cello and electric bass. The guitar and banjo tracks feel slightly spotlighted, but not obnoxiously so, and since the players in Sutton's band are all so good, they benefit from slight prominence in the mix.

Jacqui Sutton moved to Texas and surrounded herself with superb musicians, and under her guidance they have created frontier jazz. Sutton's next album will contain all original tunes, and it's going to be titled American Anthem. I'll certainly be looking forward to it, and after you hear Notes from the Frontier: A Musical Journey, it's a pretty sure bet that you will too.

Be sure to listen to: It's partly because I have always liked the song, but I feel that "Nature Boy" is one of the best cuts on the disc. After a cello opening that seems a bit Far Eastern, the musicians settle into a tango groove, and Sutton's sultry singing is in Spanish. The central portion features cello and guitar solos (and superb trumpet backup), and the final verse is in English with some ornamentation and a final flourish in Sutton's opera voice. In any language it's a tour de force.