Take 6: "The Most Wonderful Time of the Year" 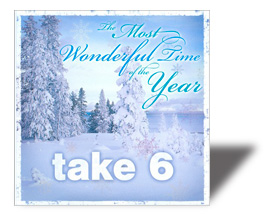 The a cappella group Take 6 has wowed audiences around the world with its virtuoso vocal style, earning them ten Grammy Awards. This is their third holiday album, and except for “I Saw Three Ships” and “It Came Upon the Midnight Clear,” it’s composed of secular holiday chestnuts that conjure up images of snowfall as seen from a cozy cabin heated by a roaring fire. Things get off to a rousing start with “It’s the Most Wonderful Time of the Year,” which, like most of Take 6’s repertory, is mellow but has a lot of bounce and life.

A calypso-like version of “White Christmas” follows, and I must say that it’s refreshing to hear this new twist on an almost too-often-sung favorite. Up next is a humorous version of “You’re a Mean One, Mr. Grinch.” A bouncy take on Leroy Anderson’s “Sleigh Ride” follows, leading to a jazzy version of “I’ll Be Home for Christmas.” “Jingle Bells” receives a surprisingly languid and laid-back interpretation, which perhaps sheds new light on it. The final track finds guest pianist and singer Shelea Frazier joining the group for Vince Guaraldi’s “Christmas Time Is Here."

The sound is lush, smooth and homogenized. I would have liked a little bit more clarity and less overt mixing, but the somewhat breathy (bordering on overly reverberant) sonics actually fit the singing well. If you’re looking for a new “chestnuts roasting on an open fire” type of holiday set, you’ll like this one.

Be sure to listen to:  Track 7 is a vocals-but-no-words version of “Dance of the Sugar Plum Fairy” from Tchaikovsky’s The Nutcracker. With its finger snapping and vocal scoops, it sounds like the singers might have had too much hot-buttered rum. I can’t decide if I like it or not, but it certainly got my full attention.