About two decades ago, outstanding female jazz artists like Ingrid Jensen balked at appearing at events that focused on women who play jazz. They were justifiably rebelling against being siloed, even as their numbers multiplied. After decades of being marginalized as “chick singers” or being restricted to “all-girl” bands, they wanted to perform on an equal footing with “the boys.” Jensen knew that a wave of talented, young female instrumentalists was trailing her by a generation, because she had encountered many of them in music programs, camps, and master classes she has lead. That wave has now hit the shore with a wealth of compelling recordings.

This review is not about the gender of the titular artists, although sexism continues to be rampant in the jazz music business. Rather, this article is about the culture and flow of musical influence. Three of the best players in this young generation are tenor saxophonists: Melissa Aldana from Santiago, Chile; Roxy Coss from Seattle, Washington; and the youngest, Julieta Eugenio, from Necochea, Buenos Aires Province, Argentina.

Melissa Aldana wasted little time establishing herself as one of New York City’s first-call players and collaborative leaders. Since moving to the US, she has had one success after another. Aldana graduated from the Berklee College of Music in 2009, released her debut album in 2010, and won the prestigious Thelonious Monk International Jazz Competition in 2013. And she scored a Grammy nomination for a solo on her album Visions in 2019. Although 12 Stars is her debut recording as a primary artist for Blue Note Records, she was a founding member of the all-star collective jazz group Artemis with Jensen, Renee Rosnes, and others, and played on the band’s self-titled Blue Note release last year. 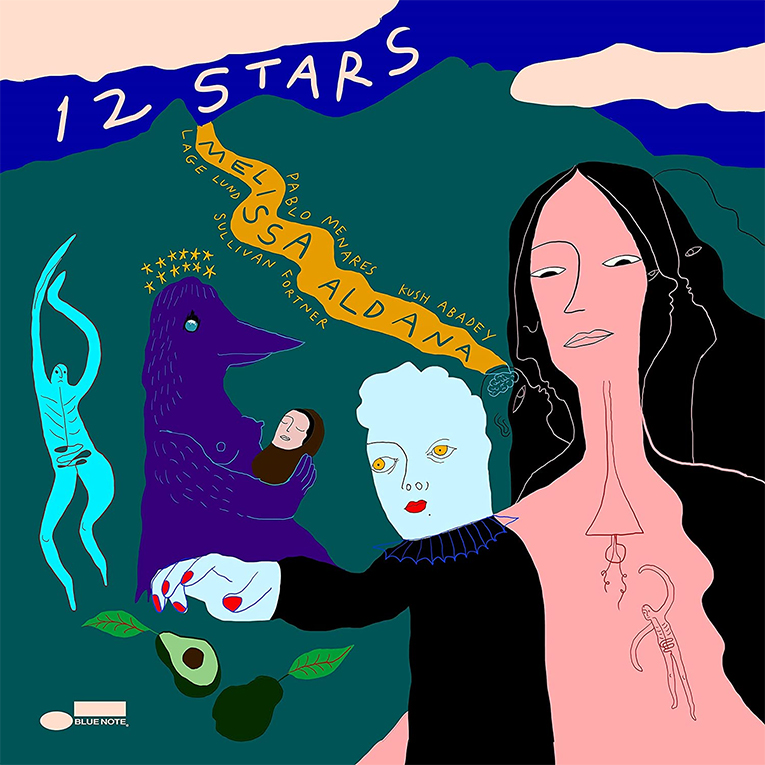 Titled after a symbol in numerology and tarot, 12 Stars begins with “Falling,” a composition inspired by the mental state she was in as 2020 began. A personal relationship had just ended, and the COVID-19 outbreak soon followed. She found herself living alone in Harlem as Manhattan shut down and performance opportunities dried up. “Falling” is the opening number every major label hopes a newly signed artist has ready—one that is akin to the microphone-drop song saxophonist James Carter included on his debut album, JC on the Set, in 1993. Building from some mellow chording by guitarist Lage Lund, who also produced the recording, Aldana embarks on a tenor solo that shows her to be a fluid, confident player as she smoothly traverses the horn’s full range in just a few bars. Her upper range is particularly effective; however, her playing also has a brawny side that alludes to her early allegiance to tenor saxophone legend Sonny Rollins.

Her expansive range is also on display on “Intuition,” which begins almost like a march, with tight rolls from drummer Kush Abadey, before evolving into some muscular swing—prime territory for Aldana’s questing tone. This range and sturdiness of compositions takes me back to the early ’80s when tenor players like David Murray and Chico Freeman freely mixed post-bop modernism with a broad stretch of influences, old and new.

Her band—which includes Sullivan Fortner on keyboards and Pablo Menares on bass—is highly supportive and cohesive, but this is Aldana’s stage. Her signature control and expressiveness at the top of the horn’s range stands out.

In keeping with a major label debut, the sound of 12 Stars is exceptional. This is thanks to the talent of veteran engineer James Farber, who has fine-tuned the sound of many of my favorite 21st-century recordings—more than I can count.

Roxy Coss is a musician, composer, bandleader, educator, and activist. While her path to success did not have the breakthrough high points of Aldana’s, she has steadily built a strong reputation as a performer and composer since releasing her first album, 12 years ago. Coss has also displayed an early interest in academia and mentorship: she is a Jazz Faculty member at The Juilliard School, an Artist-in-Residence at Arizona State University, and the founder and president of Women in Jazz Organization, a collective of more than 500 professional jazz musicians who identify as female or non-binary. Most significantly, she has honed the sound of her quintet for her sixth release, Disparate Parts. The Roxy Coss Quintet comprises Alex Wintz, guitar; Miki Yamanaka, keyboards; Rick Rosato, bass; Jimmy Macbride, drums; and, of course, Roxy Coss, saxophone. 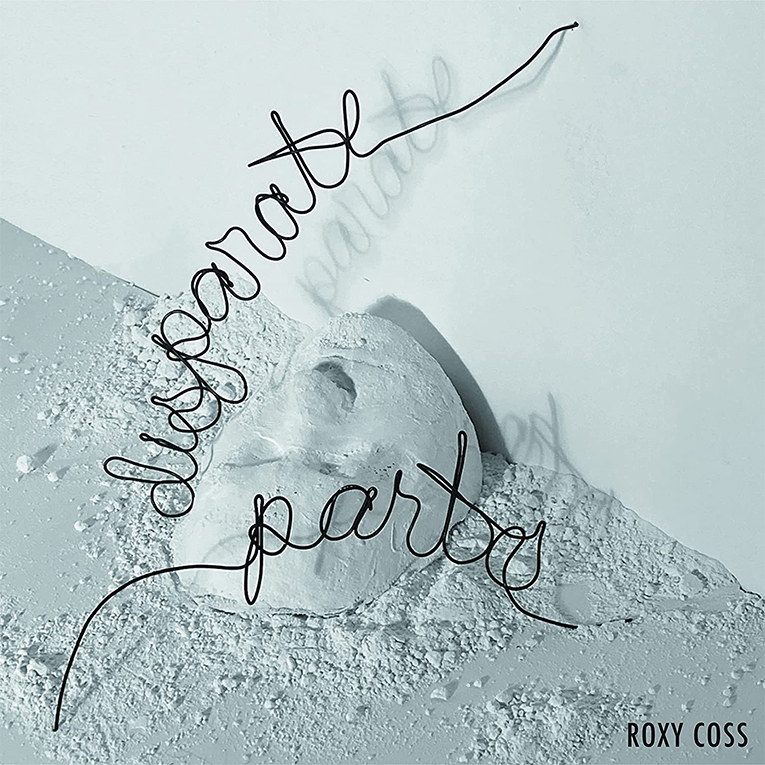 Coss gives a lot of space to her band on Disparate Parts, especially to Wintz, who alternates between a highly distorted tone and one more closely associated with mainstream jazz. The former sound dominates “The Body,” the first part of the four-movement suite that is the centerpiece of the album. Coss matches Wintz’s onslaught with a diamond-edged tone paired with the fluid attack of a big-band saxophonist. The second movement, “The Mind,” carries the suite into electronic territory that moves from shimmering noise to electric piano. At this point, the recording engineer and producer undercut the music; the soundstage seems constrained, the instruments carry little weight, and Macbride’s drums sound anemic.

Besides the central suite, Disparate Parts includes five short versions of “February,” a group improvisation in which each version evokes varying degrees of stormy cold weather. The last version on the album—actually the second one that the band recorded—sounds the most fully realized.

Julieta Eugenio studied music in Buenos Aires before moving to New York City in 2013, where she completed a postgraduate program at the Aaron Copland School of Music at Queens College, but she plays with the poise of someone who has spent years on the bandstand. Two of her teachers were Mark Turner and Seamus Blake, and I think you can hear their influence in the care Eugenio applies to timing and tone. Nothing is rushed, and in the trio setting—where a saxophonist has nowhere to hide—her tone is exquisite and breathy, but with a steely foundation. While Eugenio’s phrasing is contemporary, her tone and attack sometimes sound closer to Lester Young than to Joe Lovano. 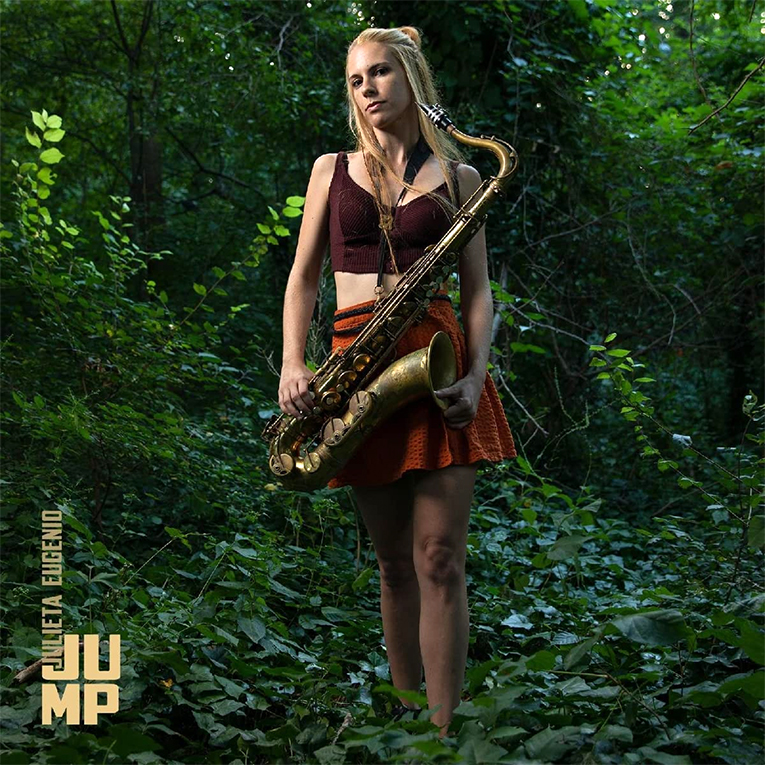 Although she released an EP of solo performances in 2020, Jump is essentially Eugenio’s recording debut, and it’s a marvelous introduction to a musician who sounds destined for great things. A trio recording with bassist Matt Dwonszyk and drummer Jonathan Barber, Jump was conceived during weekends when Eugenio escaped the NYC lockdown. Those weekend jam sessions, and the writing they spawned, came together to produce a single-day recording that sounds more like the product of weeks in the studio. It caught the ear of trumpeter Dave Douglas, who snapped up Jump for his Greenleaf Music label.

Talented newcomers often overwhelm listeners with their speed or technique, but Eugenio seems quietly confident, which is the feeling she exudes on “Crazy He Calls Me,” an intimate and unadorned duet with Dwonszyk, and on her own on “Racoon Tune,” where her tenor sounds particularly expressive. Jump is impressively paced, too, moving easily between the thorny harmony and loping pace of “La Jungla,” the balladry of “For You,” and the foxtrot tempo the trio adopts for its version of the standard “Flamingo.”

Warmly recorded at a Brooklyn studio, Julieta Eugenio’s Jump stands out as one of the most promising debut albums I’ve heard in a long time.