The Cookers: "Look Out!"

If you followed popular music in the late ’60s and early ’70s, you likely remember the hype surrounding so-called supergroups. Bands like Blind Faith, Derek and the Dominos, and Crosby, Stills, Nash & Young were touted as truly special things by the rock media.

Significantly less attention was paid to the fact that in jazz, the supergroup—a collection of musicians who were leaders in their own right or important members of other bands—was just business as usual. Louis Armstrong had already established himself as a regional star in both his native New Orleans and in the Chicago scene when, at 23, he joined Fletcher Henderson’s orchestra in New York City. During his brief, erratic career, Charlie Parker often recruited peers like Bud Powell, Dizzy Gillespie, Charles Mingus, and Max Roach for special gigs or recordings. And, over the course of four decades, drummer Art Blakey led a band that was both a training ground and a lucrative source of income for musicians spanning the generations from Wayne Shorter to Wynton Marsalis.

What’s more unusual is to find a combination of top-tier players who stick together. The Cookers—a septet that comprises trumpeters Eddie Henderson and David Weiss, saxophonists Donald Harrison and Billy Harper, pianist George Cables, bassist Cecil McBee, and drummer Billy Hart—celebrate their tenth anniversary with Look Out!, their sixth recording. Collectively, the musicians have appeared on more than 1000 recordings, and, in addition to leading their own bands, have been the backbone of groups led by Herbie Hancock, Sonny Rollins, Charles Lloyd, Freddie Hubbard, and others. Not surprisingly, three of the band’s members—Weiss, Harrison, and Harper—are alumni of Blakey’s Jazz Messengers.

While Harper, McBee, and Hart have all dabbled in adventurous harmonic and rhythmic approaches to improvisation, where all seven musicians meet is in the comfortable, soulful realm of hard bop, where peers—and former employers—like Lee Morgan, Dexter Gordon, Joe Henderson, Hubbard, and Blakey made their marks. For better or worse, that’s where The Cookers live.

Appropriately, Look Out! was recorded at the New Jersey studio where the late Rudy Van Gelder engineered recordings by all of those hard-bop pioneers, with Maureen Sickler behind the control panel. Purists may complain that she doesn’t put Van Gelder’s predominantly wooden studio to best use, but while her recording approach lacks room sound, there’s little to fault in her ability to create a warm, dynamic soundstage. The digital mix, by Katherine Miller, keeps that warmth alive, and gives each player space to display his own sonic personality. 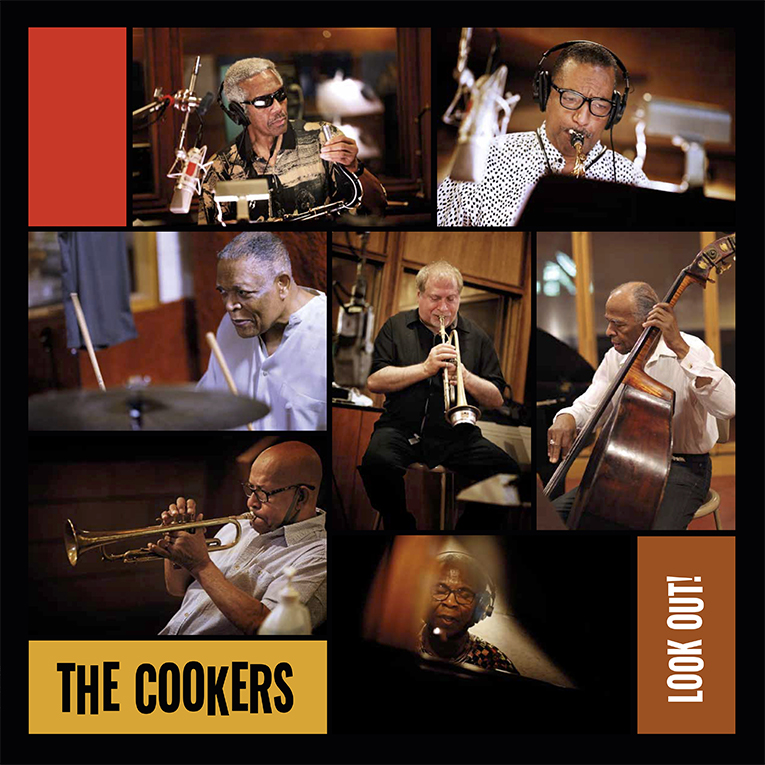 As a side note, it’s impossible not to applaud a recording that had two women at the controls. Hats off to producers Weiss and Darrel Sheinman for that.

Blakey’s influence is evident from the opening seconds of the album, as Cables lays down a dark piano ostinato—a stabbing figure that recurs throughout “The Mystery of Monifa Brown,” the pianist’s own composition—and Weiss’s arrangement establishes a strong contrast between brasses and reeds. Blakey loved assertive instrumental voices, and Weiss’s attack during his solo channels great Jazz Messenger trumpeters like Morgan, Hubbard, and Marsalis.

When Henderson steps up for his first solo, on McBee’s “Cat’s Out the Bag,” he reveals a somewhat softer, rounder sound—more akin to the minimal, airy style of Miles Davis—although the closest Look Out! comes to a ballad is Cables’s “AKA Reggie,” which still manages to swing.

The reeds, too, cover a lot of ground in terms of timbre. While Harrison has a sturdy alto tone and favors the midrange, Harper built his reputation on his husky tenor buzz, something he displays on his own composition “Destiny Is Yours.”

With so many contrasting voices present, it’s surprising that Weiss never takes advantage of this in any of the six arrangements he wrote. He sets up some gorgeous blends on “Destiny Is Yours,” “Cat’s Out the Bag,” and Cables’s “Traveling Lady,” but it would be good to hear more variety and textural detail. As it is, each song follows a predictable flow of solos, with McBee and Hart content to stay within their traditional rhythm roles.

The only real variation comes with Harper’s anthemic “Somalia,” which he also arranged. Based around a short vocal chant and the composer’s bristling tenor, the piece sounds more contemporary than most of the other performances.

But you can’t argue with the truth in advertising proffered by The Cookers. On song after song, they cook. Nothing really to complain about there. Why mess with a good recipe?