Leo Tolstoy’s novel War and Peace is in the DNA of all Russians. I don’t know if it’s true any longer, but in the 1960s, when this film version was released, every Russian teenage girl wanted to be Natasha Rostova, here radiantly portrayed by Lyudmila Saveleva -- at least, that’s a view supported by one of the excellent extras Criterion includes in this Blu-ray Disc edition.

In 1954, King Vidor had directed the first color film of Tolstoy’s immense novel, with a cast that included Audrey Hepburn, Henry Fonda, and Mel Ferrer. It did poorly at the box office in the US, but was a big hit in the USSR. Some of the comments in the new edition’s extras indicate that it was not so much the film itself but Audrey Hepburn who wowed Soviet audiences. Vidor’s version ended up being badly cut, and failed to capture the spirit of the Russian people during the Napoleonic Wars -- it left room for another, truly Russian version. Under Premier Nikita Khrushchev, the USSR’s Cultural Ministry was seeking to free itself from its repressive role established during Joseph Stalin’s long dictatorship, and gave permission to Mosfilm, the largest Soviet film studio, to have a script written.

Just about every experienced director in Russia wanted to direct the production, but the Ministry chose newcomer Sergei Fedorovich Bondarchuk (1920-1994), who had directed only a single film, Fate of a Man, in 1959. Nonetheless, the choice proved fortunate -- Bondarchuk not only directed but wrote the screenplay, and in the six years it took to make the film he poured his entire soul and his groundbreaking vision into what is now considered a masterpiece -- and suffered two heart attacks during the filming. He cast himself as the hapless Pierre Bezukhov, the unknown Saveleva as Natasha, Vyacheslav Tikhonov as Prince Andrei Bolkonsky, Natasha’s first love -- and 300 other actors for the speaking parts in this immense production.

The nonspeaking parts, mostly soldiers, numbered in the thousands. These extras were supplied by the Soviet army, and are estimated to have exceeded 12,000. Nowadays, such forces would mostly be rendered with CGI, but in War and Peace, every one of its cast of literal thousands is a real person in costume. The results are spectacular. Never have I seen such authentic, exciting battle scenes -- the only thing approaching it might be the 4.5-hour Gettysburg (1993), directed by Ron Maxwell, which used Civil War re-enactors for the battle sequences. CGI can produce wonders, but it has yet to replace the real thing.

And Bondarchuk’s battle scenes make sense. Close-ups alternate with long shots to provide more intimacy without diminishing the vast scope of the action. The wrenching vistas of thousands of dead and wounded live up to Tolstoy’s principled pacifism: As thrilling as the battle scenes are, they also fully depict the horror and waste of war.

To film this gigantic story, Bondarchuk and his directors of photography (Anatoliy Petritskiy, Aleksandr Shelenkov, Yu-Lan Chen) deployed their cameras in many ways: split screens, aerial shots, slow and fast pans, and a unique use of far-range photography for interiors. For the ballroom scene in which Natasha and Andrei meet, they put cameramen on roller skates, wheeled about by assistants. The goal was to make the audience feel a part of the film. The innovative six-track soundtrack, far ahead of its time, required that theaters be equipped with surround-sound systems.

The Criterion edition presents War and Peace as it was originally released to theaters in the USSR, as four discrete films, Parts I-IV: Andrei Bolkonsky, Natasha Rostova, The Year 1812, and Pierre Bezukhov. The entire tetralogy is 7 hours and 2 minutes long. Mosfilm’s 2K restoration of the film, which was originally shot in 70mm, was used, and the soundtrack has been converted to 5.1-channel DTS-HD. The results are splendid. Colors are bright and steady, both the battles and the luscious interiors are well defined, contrast is ideal, and the sound really does help draw you in. There’s real bass in the battlefield explosions, and good midrange presence for the dialogue.

The extras are pretty special. Two black-and-white documentaries from the 1960s, one from Germany and one from Mosfilm, vividly show the many unusual camera techniques used to make this impressive film. There are a French documentary about Saveleva, and interviews with the director’s son, Fyodor Bondarchuk, and cinematographer Petritskiy. Finally, there’s a detailed overview of the production with film historian Denise J. Youngblood, and the text of an essay by film critic Ella Taylor, the latter printed on one of those foldouts Criterion prefers but that I find hard to handle. Give me a booklet any time. 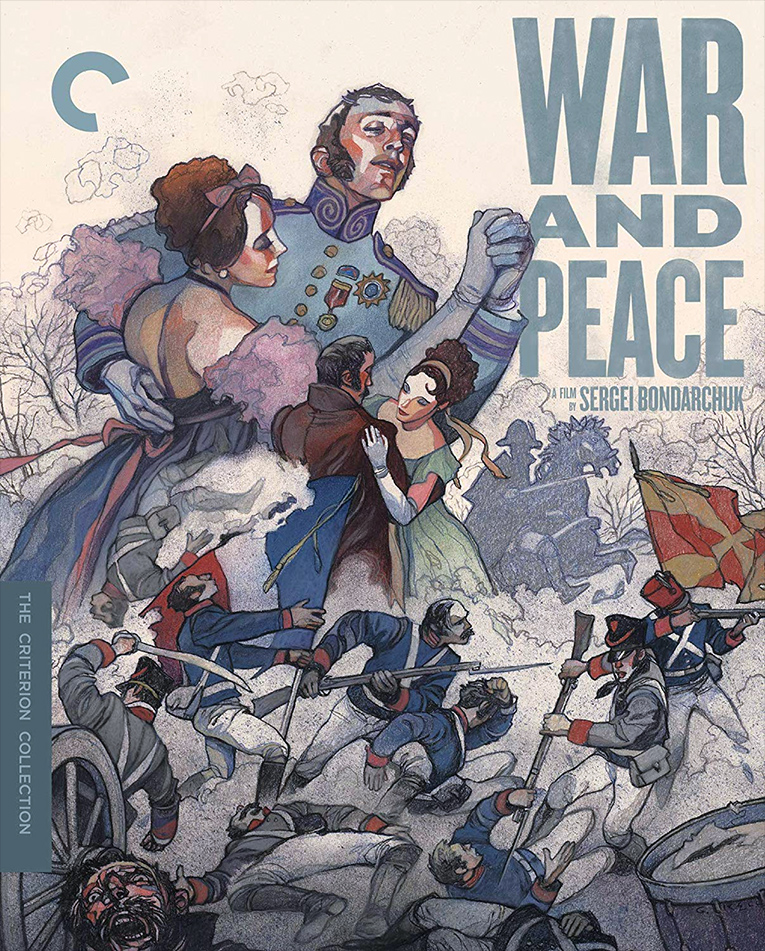 Bondarchuk’s film version of Tolstoy’s War and Peace is epic, engrossing, and edifying, and The Criterion Collection has done a meticulous job of bringing it to Blu-ray. (There’s also a DVD version, on three discs.)

Be sure to watch for: War and Peace contains so many memorable scenes that it’s hard to pick one. Try the opening sequence of The Year 1812: It begins with huge numbers of soldiers heroically marching to battle, then cuts to a ballroom scene for the aristocracy, then back to the soldiers, with lightning on the horizon. The sequence underlines the obliviousness of the ruling classes to the fates of those who fought for them, and no doubt made the USSR’s Cultural Ministry very happy.