In 1971, the thriller Get Carter was a big success for Caine. He and director Mike Hodges had enjoyed working together, and teamed up again in 1972, to make Pulp. Add Mickey Rooney, Lionel Stander, and Lizabeth Scott, and you have quite an A-list of acting icons.

Filmed in Malta, Pulp is set in an unspecified Mediterranean country. Mickey King (Caine), a writer of pulp detective novels -- one of them, My Gun Is Long, is a prop in one of the film’s many sight gags -- is approached by Preston Gilbert (Rooney), a former actor and Mafia kingpin, to ghost-write his autobiography. In the process, King is mistaken for someone else, and becomes the target of a Mafia hitman, The Priest.

Pulp is black comedy at its best, easily mixing verbal and visual humor. Rooney is amazing as Gilbert, with one classic vaudeville-like scene in which he really excels. It’s too bad his time onscreen is so short. Lizabeth Scott (1922-2015), in her final film role as Betty Cippola, looks elegant, lovely, and a bit mysterious. The overall tone is light and breezy, perfectly underscored by George Martin’s pithy, pseudo-European music. 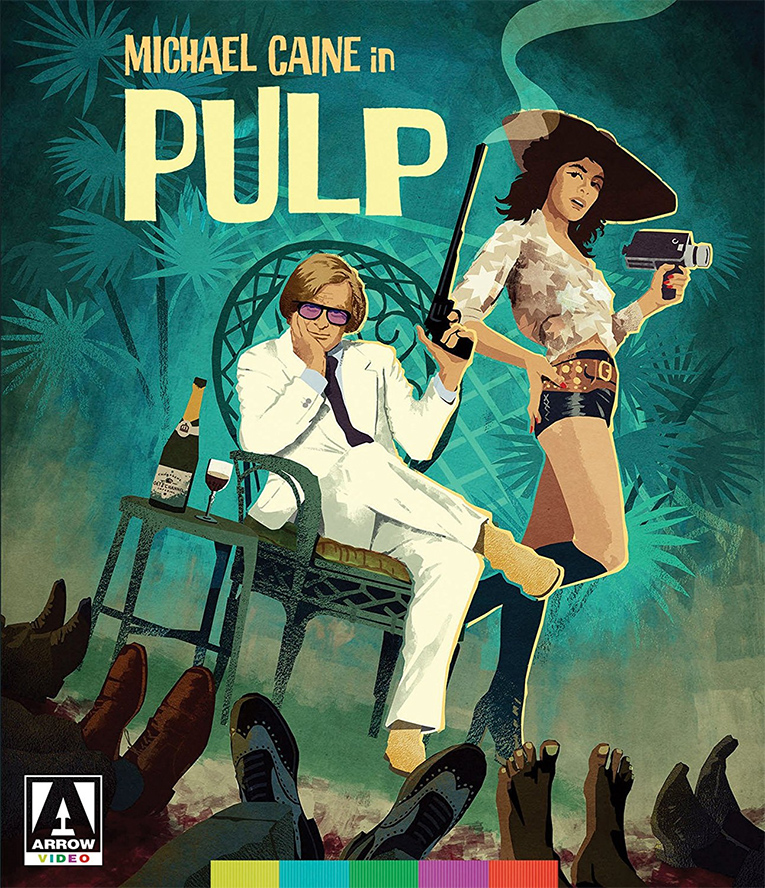 A curious feature of Pulp is cinematographer Ousama Rawi’s color palette of mostly browns and beiges. That makes it sound like sepia, but it’s far from that. The film was shot in Technicolor, and all colors come across richly, brilliantly, and very sharply defined in this Arrow-MGM restoration. The music and dialogue are equally clean and clear. It’s hard to believe that Pulp was shot more than 45 years ago.

The extras largely consist of interesting interviews with director Hodges, Tony Klinger (whose father, Michael Klinger, coproduced the film with Caine and Hodges), cinematographer Rawi, and editor John Glen, who went on to direct five James Bond films in the 1980s. There are also several collections of still images, beautifully reproduced. And a unique trailer.

Pulp is a lighthearted black comedy featuring outstanding performances and a unique color scheme, and is worth watching at least once, especially in this handsome edition from Arrow.

Be sure to watch for: There are many gangster references in Pulp, especially to films noirs -- toward the end, a famous film-noir bird gets due recognition.