The Big Knife, a 1949 play by Clifford Odets, skewered the abuses common in the old studio system that, at the time, still ruled Hollywood, and in which actors who signed contracts with studios were then treated as indentured servants who should always be ready to obey the orders of autocratic studio heads. Onstage, John Garfield played the lead role of Charles Castle, a contract player down on his luck. But Garfield died in 1952, at the age of 39; in the 1955 film version, directed by Robert Aldrich, Castle is played by Jack Palance, then best known for his turn as Jack Wilson, the villainous gunslinger in Shane (1953). There’s no doubt that Garfield’s good looks would have made him a better choice for the role, but Palance turns in a very credible interpretation.

As the film begins, Charlie is having it out with a gossip columnist who’s threatening to destroy him in print. Enter the incredible Ida Lupino as Marion, Charlie’s wife, who has once again threatened to leave him because of his philandering ways and his spineless inclination to sign a new studio contract, despite his hatred of the studio system. Also on hand is a young, over-the-top Rod Steiger as the studio head, Stanley Shriner Hoff, and a pitch-perfect Wendell Corey as Smiley Coy, the sleazy fixer who carries out Hoff’s orders. 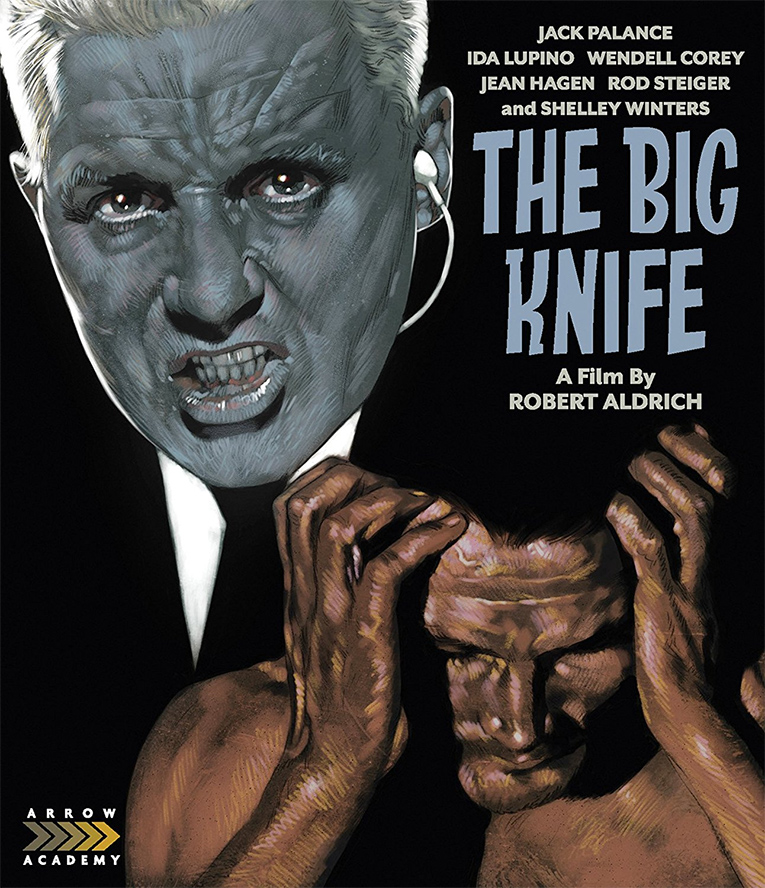 First, Hoff threatens to dig up dirt on Charlie to get him to sign the new contract. Then, Smiley tries to ensnare him in a murder plot to get rid of an aspiring starlet (the ever-delightful Shelley Winters) who’s threatened to tell the truth about a hit-and-run accident Charlie was involved in.

The mood is intense, the acting superlative. Aldrich decided to restrict almost all of the film to a single set; the result is a feeling of a Broadway theatrical production that I think works to the film’s advantage, producing a feeling of claustrophobia that mirrors Charlie’s realization that his world is closing in on him.

Taking the Criterion Collection as their model, Arrow Academy often strikes new transfers and gathers pertinent supplemental material. However, this new 2K transfer, though basically sharp and clear, is very grainy. This is detrimental to a few scenes in which the sky is definitely full of grain. Overall, I’d say the transfer is a cut above adequate. The audio transfer is spot on -- clean and robust in delivering the rapid-fire dialogue, and the very “Hollywood” score by Frank De Vol, later famous for his series of “Music by De Vol” albums of mood music for Columbia Records.

Extras include a zippy and entertaining commentary from film critics Glenn Kenny and Nick Pinkerton, and a short about Saul Bass, who designed the titles for The Big Knife. I can’t remember ever seeing an extra about titles, and this one is interesting. Bass describes his reasoning behind his titles for such well-known films as West Side Story, Seconds, and Grand Prix. There’s also a theatrical trailer (unfortunately cut short), and a clever, actor-hosted TV spot claimed to be the first ad in which TV cameras invaded a movie set.

The Big Knife is something of a bitter pill to swallow, and viable for its lively acting and Michael Luciano’s perfect editing. Arrow’s edition adequately presents this rarely seen and controversial film, but most of you will probably prefer to rent rather than buy it.

Be sure to watch for: The way Aldrich places an inanimate object, such as a lamp, in the foreground in scenes of conversation. It’s a signature of his work, and very effective.