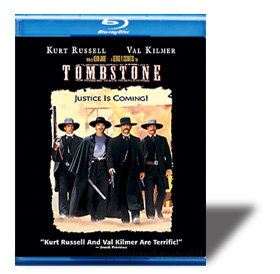 If you can set historical accuracy aside and just go along for the ride, Tombstone, released in 1993, is a satisfying western that strays only slightly from history through a bit of embellishment and speculation. Kurt Russell and Val Kilmer, starring as legends Wyatt Earp and Doc Holliday, give performances full of depth and nuance, and Kilmer's turn as the consumptive, alcoholic Holliday is possibly the best of his career. The bad guys are bigger than life, with Powers Boothe and Michael Biehn memorable as Curly Bill Brocius and Johnny Ringo. Though the legendary fight at the O.K. Corral stands at the center of the movie, the screenplay takes us to events that followed the famous shootout. Wyatt's younger brother, Morgan (Bill Paxton), is murdered and avenged in a series of grisly killings culminating in the deaths of Brocius and Ringo. Wyatt reconnects with the love of his life, actress Josephine Marcus (in reality they married and lived together in Hollywood until Wyatt's death in 1929), and the movie closes with them dancing in the snow.

The film is full of exhilarating action, and its meticulous period detail paints a picture of the west in the late 19th century. I was particularly fascinated by the manner and method in which a touring theatrical group played to a raucous audience of cowboys. Every detail is easily seen in this glorious transfer, which trumps all prior DVD releases. The picture has rich color, solid blacks, excellent shadow detail, and such a "movie look" that you might think about selling popcorn at the door. There's so much focus that in panoramas of the town streets you can see a character up front and a building half a mile away with equal clarity, resulting in scenes with great depth and a three-dimensional feel. The DTS-HD Master Audio sound goes hand-in-glove with the outstanding picture. Bruce Broughton's stirring score is solidly reproduced, and the gunfights spread the sound of gunfire around the room.

But while picture and sound score big on this release, the extras are lame. There's a 27-minute production featurette in which the director and actors talk about their characters and their effort to adhere to the historical facts. It starts well but quickly degenerates into fluff. The only other extras include a brief look at the storyboards for the famous gunfight and some trailers and TV spots. A first-rate action movie like Tombstone deserves better, especially one with such satisfying video and audio transfers.

Be sure to watch for: In chapter 16 there's a violent electrical storm on the night Morgan is killed, and the brilliant lightning illuminates the darkness, providing brief glimpses of glaring reality that quickly fade to shadow and then to dark. The scene showcases Blu-ray's ability to provide an outstandingly detailed picture, whether dark, light, or in between.