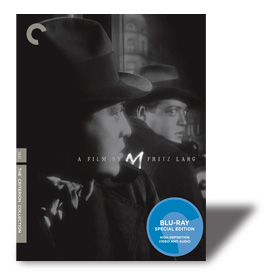 Child-molestation cases and sex offenders are blasted at us so often by the press, that we’re liable to assume that they are exclusive 21st-century issues. All we have to do is look back to 1931 and Austrian-born director Fritz Lang to realize our mistake. Unfortunately, child molesters and serial killers have been around a long time. M was the first film to show the killer as a sick person who couldn’t control his compulsive actions. In his dramatic monologue at the conclusion of the film, killer Hans Beckert (Peter Lorre) cries out that he blacks out and then later will see a poster telling of the horrible things he’s done, things he is unable to stop. Lang’s film is about the investigation and chase to find a murderer but is also a multilayered study of class distinction in Germany at that time. Beckert is not discovered and captured by the police, but by a vigilante army of “good” criminals who find it difficult to pursue their thievery when the streets are being flooded by police officers searching for the child killer. They agree that the crimes are monstrous, but they also know they are bad for business. Some consider Lang to be to be the father of film noir, and M can easily be seen as representative of that genre. It has the right look, complete with shadows on the walls hovering over glistening wet streets and the high contrast of dark and light for the interiors, all visuals that feature a main character driven to destruction by forces beyond his control.

Criterion has done a superb new restoration. I’ve said it before and will say it again: others might come close these days, but no one does black-and-white like the Criterion team. Other than the odd aspect ratio (1.19:1, a skinnier image necessitated in early German sound films by the addition of an optical soundtrack to a standard film strip) you might swear this movie was made much later, say the '50s. The flicker that so often plagues transfers of 1930s films is almost completely absent; for 97 percent of the film’s110 minutes, the image is rock solid. If you avoid black-and-white movies as rule, try this one; it might well convert you to being a fan.

This was Lang’s first movie with sound (no matter what soundtrack you’ve seen Lang’s 1928 Metropolis with, it was originally a silent film!), and it’s truly remarkable that Lang immediately mastered the new cinematic tool. Most often, of course, the sound serves the image onscreen but at other times the partnership reverses. After the murder of Elsie Beckmann at the beginning of the movie, the screen goes to black, and in the blackness, after several seconds of silence, we hear the cry of “Extra! Extra!” The scene opens and we see that it is has been a newsboy shouting those ominous words. The scene accelerates in tension as other newsboys and townspeople fill the street. We might remember the visual impact of neighbor against neighbor in this violent scene, but it is the sound that first gets our attention. This is only one example of many, and Criterion has taken great pains to make the 79-year-old optical track sound better than anyone could hope.

Before you ask, let me say that this new edition of M is quite a bit better than the company’s first release of the movie. The extras come partly from that older edition and some are new. The most significant in the latter category is a recently discovered English version of the movie, for which some scenes were shot over and edited in with the original material, which was dubbed. Peter Lorre’s final speech is actually Lorre speaking and acting in English, but though it is quite effective, one misses Lang’s trusty hand behind the camera, for he apparently had nothing to do with the English or French versions. In addition to this feature, there’s William Friedkin’s 50-minute film of conversations with Fritz Lang in the 1970s, French director Claude Chabrol’s ten-minute remake, several video interviews, and a documentary on the film detailing its first release to its new digital restoration. A detailed and informative historical commentary by German film scholars Anton Kaes and Eric Rentschler is one of the best of its kind. Once again Criterion has given new life to a deserving landmark of cinema. The message comes across in every exquisite detail that this company really loves film.

Be sure to watch for: In the middle of chapter 7, Beckert, while roaming the streets of Berlin, stops in front of a store that has geometrically arranged displays of knives in its show window. The camera catches him framed by a reflected knife display, and then switches to his point of view as he sees the reflection of his next victim framed by the same display. Beckert pauses before pursuing his prey, and the camera catches his reflection and bug-eyed expression in a most menacing way. It’s an unforgettable scene.