The four Japanese folk tales that comprise Kwaidan (1964) followed a curious path in becoming this iconic film by director Masaki Kobayashi. The stories had been passed down through generations by word of mouth in Japan when Greek-Irish writer Lafcadio Hearn (1850-1904) first heard them, and published them in English versions edited to make them appeal to Western audiences. They were also translated back into Japanese as Hearn adopted a Japanese name, Yakumo Koizumi. Eventually, director Kobayashi and his screenwriter, Yôko Mizuki, adapted and expanded four of Hearn’s versions.

The stories chosen for the film were “The Black Hair,” “The Woman of the Snow,” “Hoichi the Earless,” and “In a Cup of Tea”; they appear in that order, with an intermission between the second and third. These are true ghost stories -- they unsettle through mysterious happenings rather than blood and gore. (There is some of the latter, but it’s mild compared to what we see onscreen today.) “The Black Hair” is about a bored Samurai who leaves his wife for a life of glamour, only to realize his mistake and return, without knowing that, in the meantime, his wife has passed on to another world. “The Woman of the Snow” is a legendary character who breathes death into the lungs of those dying from the cold. She becomes mortal and has three children, only to leave again. “Hoichi the Earless” -- the most complex, stylized, and beautiful of the stories -- is about a blind, biwa-playing monk summoned to perform the saga of Dan-no-ura by the very soldiers and leaders who died in that famous battle. And “In a Cup of Tea” provides a bizarrely comic yet terrifying ending for the tetralogy. 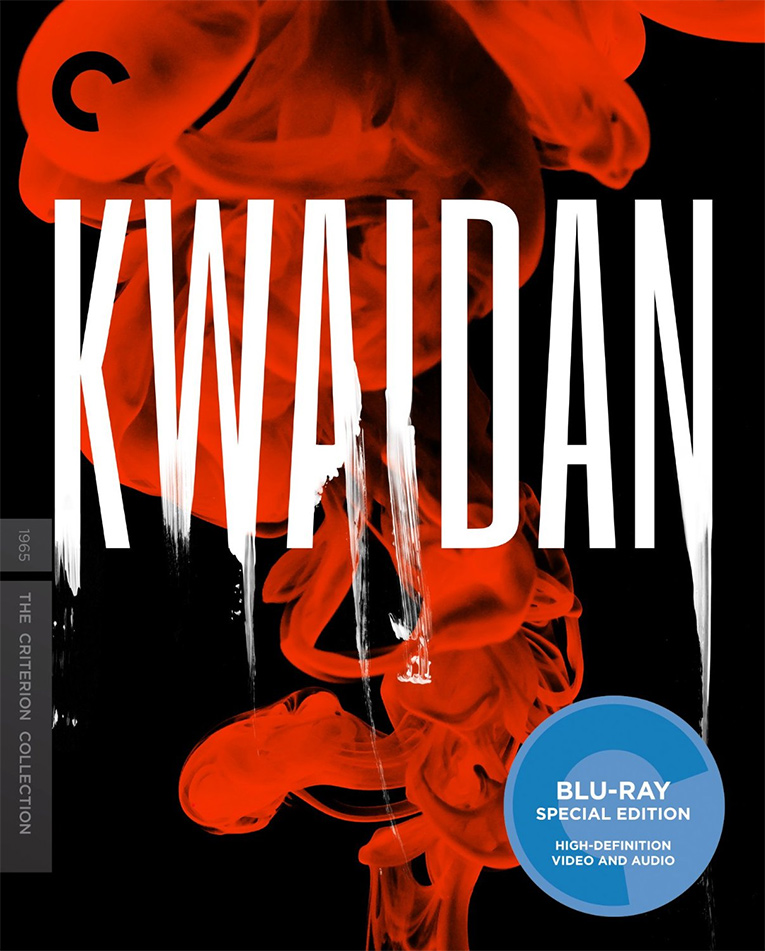 Kwaidan was Kobayashi’s first film in color. He bought many art books to get ideas, clipping out what he liked and putting the pages in a notebook. At the time, it was the most expensive film ever made in Japan. Kobayashi’s original cut was 183 minutes long, but the producers wanted to submit it to the Cannes Film Festival, and at that time no film longer than two hours was allowed to compete. Kobayashi reluctantly cut all of “The Woman of the Snow,” and Kwaidan was released in the US at 123 minutes.

On this Criterion Collection Blu-ray Disc, it is presented in its full original length and aspect ratio of 2.35:1. Transferred from a completely restored print, it shows no damage, but exceptionally rich colors and sharp definition, and stands head and shoulders over Criterion’s earlier release on DVD. The music is by the respected Japanese composer Tôru Takemitsu, who was a big fan of John Cage. Takemitsu’s music contributes greatly to the shifting moods of Kwaidan; in Criterion’s 24-bit restoration, it sounds very effective and appropriately brittle, blending sound effects and music performed on prepared piano and other rare instruments.

The extras include an informative commentary by Geoffrey O’Brien, the American poet, translator, and film critic, as well as a piece about Lafcadio Hearn, interviews with Kobayashi and assistant director Kiyoshi Ogasawara, and trailers.

Kwaidan is a landmark film in the history of Japanese cinema. Rich in tradition and folklore, it is moody, mystical, and provides some good chills while meticulously depicting the human condition. Criterion’s new edition is nothing short of jaw dropping.

Be sure to watch for: The skies throughout. They are seldom real, most often being painted or, as in “The Woman of the Snow,” filled with eyes gazing down on the characters.