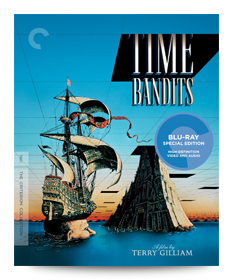 Since I love fantasy, social-satire, and time-travel films, Time Bandits has long been a favorite movie. It's had a checkered experience on home video: Criterion's previous laserdisc and DVD left something to be desired, as did the Image Blu-ray release. The new Criterion Blu-ray, produced and restored at 2K under director Terry Gilliam's supervision, and with the correct aspect ratio of 1.85:1, solves everything. It's a knockout. I don't give this advice often, but if you love this movie as much as I do, read on and be prepared to put your old version on the eBay auction block.

Gilliam and fellow Monty Python alum Michael Palin wrote the script and said they wanted to make it "exciting enough for adults and intelligent enough for children." Based on this statement, some have declared Time Bandits a children's film, but I think it's more of a family film that can be enjoyed on many different levels by people of all ages.

The title characters are six dwarfs who appear in the bedroom of young Kevin (Craig Warnock) one night and drag him off on an adventure through time and space. It seems the sextet used to be caretakers for the holes in the space-time continuum of the Supreme Being (Ralph Richardson), but then decided they could steal his map and use those portals to rob and loot across the ages. They steal from Napoleon (a hilarious Ian Holm) just as he is sacking Italy; rob from Robin Hood (a very proper John Cleese), who actually gets the best of them; and appropriate the riches of King Agamemnon (a jovial Sean Connery), including his gold crown.

Then the crew is discovered by Evil (David Warner), who wants the map so he can destroy the universe with technology. This is one of the best bits of satire -- setting forth pure evil as technology. While the story is unfolding, Kevin and the dwarfs face pursuit from the Supreme Being, who ends up being Richardson in a tweed suit claiming he had planned the theft all along. He snaps out crisply, "I am the Supreme Being. I'm not entirely dim." 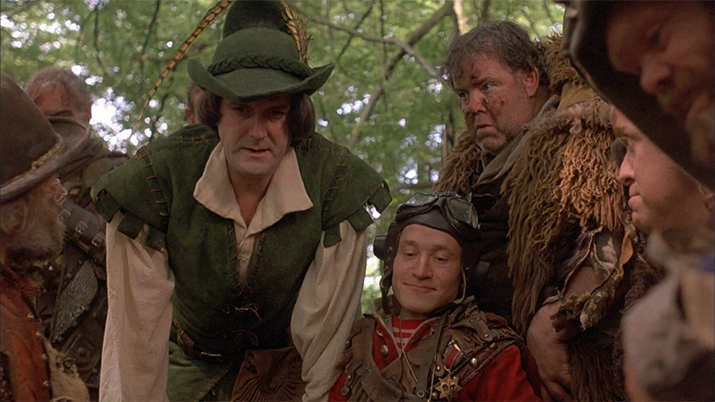 Two of the most striking things I immediately noticed in watching this new transfer were the sharp focus and the rich colors. The red and black uniforms in the Napoleon sequence, with their gold and white trim, are stunning. The Ethiopian scenes are just as rich. You can almost feel the sand and revel in the contrast of brightly colored costumes. The upgrade in picture quality seems an overall miracle. At times it took my breath away.

The original Dolby Stereo soundtrack has been remastered extremely well to PCM uncompressed audio that is robust and beautifully delineated. You can hear all of the dialogue clearly, yet the music and sound effects are bold and often brash. The closing music by George Harrison rocks joyfully. This is one of the best soundtracks Criterion has produced.

There is no accompanying booklet in the set. Instead there is a foldout. In reviewing one of the earlier releases of Time Bandits, I remarked that it would be great fun to have a foldout of the map the crew uses to get from place to place, and here it is. One entire side of the Blu-ray foldout is used for a reproduction of the map (thanks, Criterion!), and the other side contains the production credits and a zippy written appreciation by critic David Sterritt.

As to extras on the disc itself, there's a highly entertaining commentary from Gilliam, John Cleese, Michael Palin, David Warner, and Craig Warnock. Gilliam is an appealing raconteur, and he's featured in a near hour-long conversation with Finnish film critic Peter von Bagh at the 1998 Midnight Sun Film Festival. Here's a neat twist: close your eyes and Gilliam sounds almost exactly like interviewer Dick Cavett, making you wonder if they ever occupied the same space at the same time. Moving on, there's a new mini-documentary with production designer Milly Burns and costume designer James Acheson that focuses on creating the different historical time periods in the film.

Time Bandits is a film I watch at least every two years, and now Criterion has made that a better experience than ever. I believe I have seen every home video version, and this new one is reason to ring out your old one and ring in the new.

Be sure to watch for: Chapter 10 takes place on the RMS Titanic. This was on a set and filmed under studio conditions and has astonishing detail. The end shot of the ship's disappearance into the ocean was taken from the film A Night to Remember.