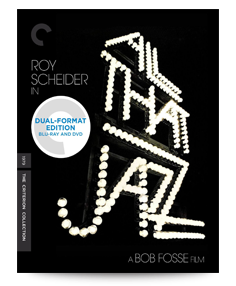 Not many directors would take a heart attack as inspiration for an autobiographical movie, but not many directors were like Bob Fosse, a song-and-dance man and choreographer with a very dark side. In All That Jazz he created a most entertaining movie about his life that only he could have made.

Roy Scheider plays Fosse’s alter ego, Joe Gideon, a man abusing life by living it to more than its fullest -- drinking, chain smoking, womanizing, and burning the candle at both ends by directing and choreographing a Broadway show by day while cutting and editing a movie on Lenny Bruce at night. Cut into the scenes of Joe's life, we have fantasy sequences that are set in what looks like the backstage of a deserted theater where Joe talks with the Angel of Death (Angelique, played by Jessica Lange). Every once in a while in the early parts of the movie, we get a very brief shot of Joe in a hospital bed, barely hanging on to life.

Spoiler alert: Joe finally has a heart attack, but he survives his operation and begins his recovery. Having been transferred to a private room, he takes up all his character defects again -- smoking, drinking . . . in short, partying to the max. He crashes again and has a series of hospital hallucinations that are manifested as Broadway production numbers starring the three important women in his life: his ex-wife (Leland Palmer), his current girlfriend (Ann Reinking), and his daughter Michelle (Erzsebet Foldi). The final production number is led by Joe and O'Connor Flood (Ben Vereen). The music? The Everly Brothers' "Bye Bye Love" with new lyrics sung by Vereen: "Bye bye life . . . I think he's gonna die." Joe embraces Angelique, with predictable results. 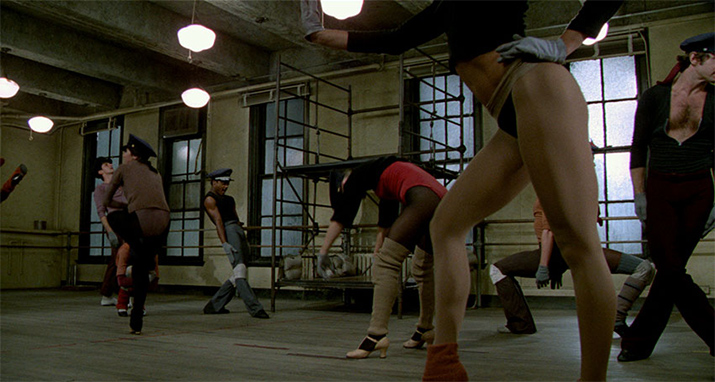 Throughout the film, Fosse uses music that most people know, but he gives each song new meaning by its placement. For the dancers' audition scene that opens the film it's George Benson's version of "On Broadway." In the final fantasy sequences, the songs are "You Better Change Your Ways," "Who's Sorry Now?" (done a la Busby Berkeley), and "Some of These Days."

It's all a little bizarre but a lot brilliant. Scheider, an actor never fully appreciated by the public, is absolutely mesmerizing. He was nominated for an Academy Award, but in an ironic turn lost out to Dustin Hoffman (for Kramer vs. Kramer), who had starred in Fosse's Lenny. Has anyone ever danced like long-legged Ann Reinking does in this movie? (Perhaps Eleanor Powell and Cyd Charisse; Reinking is in good company). Though Reinking is brilliant, it is perhaps Leland Palmer who gets Fosse's dance style completely. The scene where she's dancing typical Fosse material while talking to Scheider about his infidelities is one of the highlights of the movie, and it must have been darned difficult to pull off (Palmer and Scheider make it look so easy). And on and on; there's not a weak acting link in All That Jazz, not only because there's so much talent, but because Fosse knew how to get the very best from his actors. That reminds me that I have to mention the "Airotica" scene, a dance number that's the most erotic entertainment I have ever seen.

As far as extras go, Criterion has almost outdone itself with this set. First off, the video (1.85:1) and audio (3.0) transfers are stunning. Top that with several hours of insightful extras, which include Fosse being interviewed on several shows, and a very lengthy current-day discussion between Reinking and Foldi. There is dynamic and enjoyable scene-specific commentary from Scheider, recorded in 2007. The interview I like best puts Fosse and Agnes de Mille on Tom Snyder's Tomorrow show. The guests are not only at their best, but we're reminded what a brilliant and intense interviewer Snyder was. There's still more, but to make up for the spoiler, I'll let you discover it for yourself.

All That Jazz is a must for those who appreciate dancing and show business in general, but also for those who like a good drama laced with extremely dark humor. Criterion has done it standing-ovation justice.

Be sure to watch for: Joe's start of the day is a recurring scene throughout the movie. Eye drops to take out the red, Vivaldi on the cassette player, Alka-Seltzer fizzing in a glass, a shower with the ever-present cigarette dangling from his lips, Dexedrine, more eye drops, and a final "It's showtime, folks!" to himself in the mirror. Each time we see this sequence it's made a little more bizarre by using different camera angles, primarily from below, and cut a little crazier to reflect Joe's slipping hold on life.