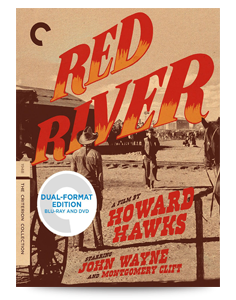 John Wayne and Montgomery Clift on the Chisholm Trail

Red River has always been one of my favorite Westerns. I'd put it up there at the top with Shane, The Big Country, Duel in the Sun, and High Noon. Director Howard Hawks wasn't really a specialist in the genre, though he ably directed everything from dramas (Scarface) to comedy (Bringing Up Baby) to science fiction (The Thing from Another World). But I think he got everything -- well, almost everything -- right in telling a tale of the first cattle drive on the Chisholm Trail.

Based on the novel Blazing Guns on the Chisholm Trail by Borden Chase, the movie tells not only the story of the cattle drive but also that of Thomas Dunson (John Wayne) and his adopted son, Matthew Garth (Montgomery Clift). The Civil War has ravaged the South, and Dunson's huge herd of cattle can provide much needed income if he can only get them to Missouri. There's no railroad nearby in 1865, so Dunson must hire cowboys to herd and drive the cattle north to connect with the railway. Garth is along, of course, and inexorable tension builds between him and Dunson, finally to the point where Dunson says he will kill Garth when he gets the chance. It's a classic confrontation between old and new generations.

The prairie scenes are magnificent, and the cattle stampede, its crossing the Red River, and the herd's entry into the streets of Abilene are spectacular. But it's really the tension between Dunson and Garth that makes the film of greater interest. Wayne had been in many B westerns, but Red River established him as a bankable A-lister. I think, however, it is Clift who acts circles around everyone. You always get that feeling that there's really some presence behind his eyes, that he's often reacting without having to say a word. It's a masterful performance that launched a fascinating, if all too brief, career.

Dimitri Tiomkin’s music score is worth a mention, too. The Russian-born composer was, like Hawks, multifaceted, but he's especially remembered for his scores for Westerns. In Red River, he established a pattern often imitated by his peers and successors. Biographer Christopher Palmer describes the opening title music this way: "The unison horn-call is indeed an invocation: the gates of history are flung wide and the main theme, high and wide as the huge vault of the sky, rides forth in full choral-orchestral splendor." 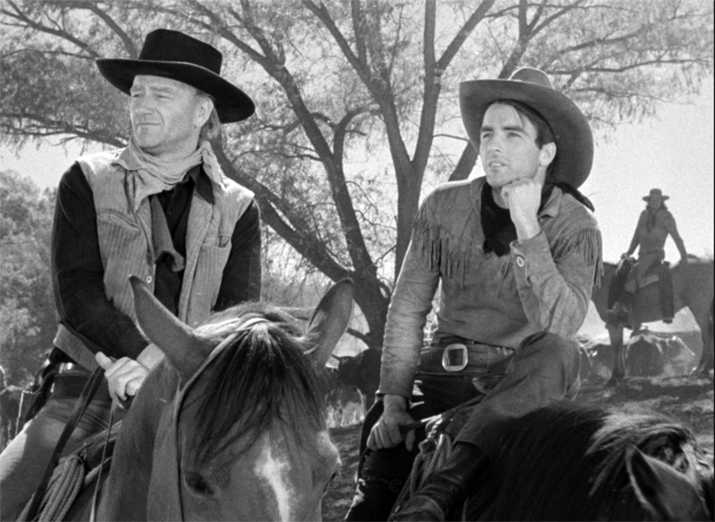 Tiomkin would later establish a pattern of writing memorable title songs, such as "The Ballad of High Noon," "Friendly Persuasion," "The Green Leaves of Summer" (from The Alamo), and "The High and the Mighty." These would soar on the pop charts, stay there for quite a while, and be recorded by many well-known artists.

Criterion has, as expected, created a beautiful package for this great black-and-white film. The video and audio transfers are first rate. There are two Blu-rays and two DVDs in the set because there are two versions of the film, the theatrical and the prerelease versions. The latter used pages of a book to narrate the story, whereas the theatrical replaced all but one of these with a narration from veteran character actor Walter Brennan, who also starred in the movie as Nadine Groot. The narration disturbs the flow much less than the printed pages, which are written in script that's not so easy to read. I'll go for it, while admitting in the same breath that the longer ending of the prerelease version is better. The theatrical ending seems rushed, ill planned, and perhaps even trite.

In addition to two different versions of Red River, you'll find a printed copy of the Chase novel, quite a few audio interviews, and a very good video interview with film critic Molly Haskell, a longtime champion of the Howard Hawks movies. In the set's booklet you'll find essays by film historian Geoffrey O'Brien and an interview with Christian Nyby, film editor for Red River and other Howard Hawks films.

I found it interesting that Hawks later said he wished he'd made the film in color. With all the shots of wide-open spaces I can surely see it that way. Taking that into account along with the rushed ending, we have to regard Red River as a flawed masterpiece -- more masterpiece than flawed, and well worth your viewing time.

Be sure to watch for: There's an interview with author Borden Chase that sheds a lot of light on how writers feel about directors. Hawks completely changed the ending of Chase's book (with both his endings), and that must have stung a bit.