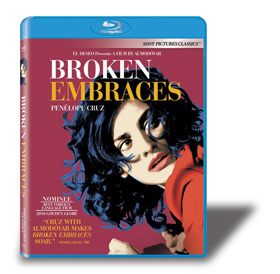 Pedro Almodóvar Adroitly Juggles Two Films Within a Film and Pulls an Engrossing, Sexually Charged Thriller Out of the Hat

Pedro Almodóvar is a filmmaker’s director. Every frame he makes seems full of a knowing exuberance that’s in the same breath new and tribute. In this most recent film, he channels a bit of Alfred Hitchcock, while the voluptuous Penélope Cruz as Lena shows an occasional trace of Audrey Hepburn. Almodóvar even gives a nod to Orson Welles by giving his main character, Mateo Blanco (Lluís Homar), the pseudonym "Harry Caine" (from Harry Lime and Citizen Kane). In Broken Embraces, a mystery tale of sex, love, and revenge, Almodóvar skillfully juggles several stories at once. In the present, director and screenplay writer Harry Caine spins out a story about the past, when he went by his real name and fell in love with Lena while making a movie called Girls and Suitcases. A young documentary filmmaker, Ray X (Rubén Ochandiano), approaches Caine with the idea of making a film, one which turns out to be autobiographical. Ray is constantly filming everything and everyone with his handheld camera, both in the present and in flashbacks. So, with Girls and Suitcases and Ray’s constant documentary filming, we have two films within the main film, the latter told with a flashback storyline. Confused? Amazingly, Almodóvar makes it all clear and the stories cleverly converge in the last reel, with surprises that are more satisfying than shocking. The cast is perfect in every way, and Cruz is outstanding. She may be one of the most beautiful women in the world, but she doesn’t just rely on her looks. Her subtle characterization and ability to get under the skin of a character make her an entirely believable and consummate actor.

Almodóvar makes strong use of primary colors, particularly red. Looking at this vibrant, nearly perfect Blu-ray transfer, I was reminded of the days of laserdisc, when it would have been a miracle to achieve reds like these without severe bleeding. The Blu-ray also has a comforting light grain throughout that gives it a real movie look, and the level of detail ranges from adequate to outstanding, depending on the scene. The 5.1 DTS-HD Master Audio sound is mostly up front (except on a few occasions when the rear channels provide atmosphere) and it’s kind to both the music and the dialog. Unfortunately, the extras, which include a short but interesting sequence where Almodóvar directs Cruz, are pretty lame. You can also see more of the Girls and Suitcases film by watching the first of three deleted scenes, which you can follow with "The Cannibalistic Councillor." The film is in Spanish, by the way, with easy-to-read subtitles.

Be sure to watch for: Chapter 8, at 48 minutes and 50 seconds. An overview shot shows Lena chopping tomatoes, cucumber, and garlic for gazpacho. The vibrant wood tones of the chopping block, the brilliant reds of the tomatoes, and the greens of the cucumbers have incredible presence. Lena sheds a tear, and in an unforgettable moment of movie magic, we see a close-up of it striking the tomato’s surface.