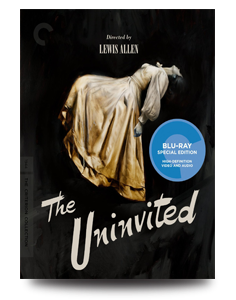 Just in time for Halloween, Criterion, who brought us Eyes Without a Face last week, has released The Uninvited, a classic black-and-white ghost story directed by Lewis Allen in 1944. It's considered the first Hollywood film to take ghosts seriously and not explain them as the result of manmade parlor tricks.

Roderick Fitzgerald and his sister Pamela (Ray Milland and Ruth Hussey) fall in love with an old house on the rocky coast of England and move in, surprised that their small monetary offer was enough to purchase it. They quickly learn, however, that the house is haunted. The studio where composer Roderick writes his music is always cold. Candles dim, and he hears sobbing sounds late at night.

It becomes clear that the haunting has something to do with Stella Meredith, the lovely daughter of the former residents. Her mother plunged off of the cliff after a struggle with her housemaid, Carmel, and everyone begins to assume that the mother is the ghost. She is, but there is also another, and to tell more would spoil the plot for those who haven't seen this landmark film.

Ray Milland is in fine shape as Roderick. Filming of The Uninvited took place a year before his Oscar-winning role in The Lost Weekend. It was a busy time for the actor, with six films being released between 1944 and 1945. Roderick is not a demanding or deep role, but Milland plays it with conviction, authority, and charm. Ruth Hussey, often underestimated because she was so reliable, is the perfect foil for Milland. But it is two other women who emerge as the most memorable actors in the film.

One is Gail Russell, who made her film debut in The Uninvited. A lovely brunette with a wholesome girl-next-door face and a sexy figure, Russell would have a short-if-memorable career. The extras on the Criterion disc indicate that she started drinking on the set of The Uninvited and, ravaged at the tender age of 36, she died of alcoholism. The other woman is Cornelia Otis Skinner, who makes her character of Miss Holloway one of the more crazy and sinister women in the history of cinema. You won't forget her.

Another "character" you won't forget is Victor Young's song, "Stella by Starlight," which has had a long life as a jazz classic after the movie. Ned Washington wrote lyrics for it two years after the movie premiered, and the likes of Stan Getz, Miles Davis, and Ella Fitzgerald have since played or sung it.

The movie is shot in sharply contrasted black-and-white, and Criterion has done it full justice. Many scenes, such as the séance scene, are done with very little light at all (especially for a Hollywood production of the period) and the shadow detail is excellent. The swirling waters off the rocky coast are impressive, as is the detail in the mysterious mists that are seen in the house. The sound is limited by the source, but dialogue is clear and the music a little above adequate.

You won't find the usual arsenal of extras we expect from Criterion, but what is there is good. There's an intriguing half-hour visual essay by filmmaker Michael Almereyda that discusses most of the participants in the movie, and it includes still frames not just from The Uninvited but also from other films associated with the stars. There's even a section on the lurid horror and science fiction films Milland did late in his career, focusing on X: The Man with the X-ray Eyes (1963). And there are two very different radio adaptations of The Uninvited from 1944 and 1949, both starring Milland but largely filled out with casts from the magnificent pool of radio actors working at that time. The 1949 Screen Directors Playhouse version brings director Allen to the microphone at the end of the show, along with Milland.

A few words about the included trailer: it looks awful, with little contrast and washed-out shades of gray. I bring that up because this is the way younger generations have viewed black-and-white movies on late-night television, and those bad experiences have colored -- pardon the pun -- a newer audience's view of black-and-white. No wonder the opinion is often negative. Look at the magnificent transfer of the feature here and let it erase those bad memories. For a movie like The Uninvited, black-and-white seems ideal, surely as Criterion presents it.

Be sure to watch for: The last section of the visual essay presents some memorable shots, including a still with Milland in a herringbone jacket against a cobblestone street. I mulled over how far technology has come. A LaserDisc image would have been shimmering with those patterns, while the Criterion Blu-ray is rich, deep, and steady as a rock.