"Africa: Eye to Eye with the Unknown" 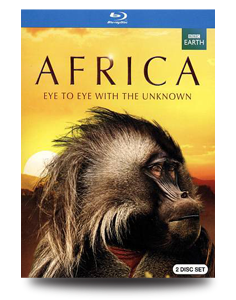 BBC Earth Documentary Is One of the Best of Its Kind

Have you ever wondered what the black rhinos and elephants do after dark down by the watering hole? Puzzle no longer, as the newest BBC Earth documentary, Africa: Eye to Eye with the Unknown, uses special new starlight cameras to show you. Spoiler alert: it turns out that rhinos aren't really loners all the time, and that they can even go a little crazy by the light of the moon. One truly trips out. Elephants, not to be outdone, have their own sort of post-hippie love fest.

Life and Planet Earth were wondrous, groundbreaking nature-documentary knockouts, but I think Africa is even better. It's more cohesive, and we get to see a bit more of veteran naturalist David Attenborough on location rather than just hearing him as a disembodied narrator. Attenborough is the soul of these productions, and his enthusiasm and spirit at age 86 are an inspiration.

We can revere Attenborough, but he's lucky in having a truly awe-inspiring star to deal with -- nature. As smug as mankind can be about creating a new bridge or this year's latest, tallest building, nothing man does can touch the incredible images served up in the wild. And there are plenty of them on this two-disc set.

The series is presented in six chapters: "Kalahari," "Savannah," "Congo," "Cape," "Sahara," and "The Future." Each 50-minute show is followed by a ten-minute "Africa Eye to Eye" short that shows us the astounding techniques the cameramen used to capture their incredible footage. After watching these, one can only admire the ability, persistence, dedication, and courage of the crews that film for BBC. The sixth segment is pro-environmentalist in its message to save the African continent and its one-of-a-kind animals, but it takes a different tact in showing what local Africans are doing to save their environment.

The pictures here include breathtaking vistas of various parts of the continent and much more. Be prepared to see two male giraffes draw blood as they duel over a female by banging each other with their long necks and those nubby little knots on top of their heads. Be ready to see two bull elephants, one with tusks like battering rams, fighting over a female. Be thrilled to see a sped-up storm with lighting so ferocious that those Fourth of July celebrations pale in contrast. Be partner to intimate shots of snakes, naked mole rats, and white ant families. Laugh at all the monkey close-ups that make them seem so human, especially when you look into their soulful eyes.

On and on, at every turn, Africa reveals some wondrous new insight. Don't blink and you'll see every tooth of a great white shark as it feasts on a whale carcass, a hippopotamus on holiday romping in the breakers of the ocean coast, and yes, a giraffe winking.

This series seems made for home-theater systems with large screens and state-of-the-art surround-sound systems. The HD filming is incredibly sharp so that whether it's an overhead shot showing the path of a river or a close-up of a face, every detail is visible. You'll never forget all the close-ups of eyes. The soundtrack lets Attenborough's voice come through clean and clear. We're often treated to the lush sound of the BBC Concert Orchestra, and the actual sounds of Africa are mixed in with total success. Surround sound defines locations and underscores dramatic moments.

Africa: Eye to Eye with the Unknown is a triumph and a series not to be missed, especially on Blu-ray.

Be sure to watch for: The first chapter of "Sahara" shows a mammoth sandstorm racing across the desert. As awesome as tornadoes look, the sandy clouds of destruction roaring over the terrain are perhaps the most frightening things I've ever seen. You might be able to dodge a tornado, but there's no way to escape the sandstorm's miles-wide wall of terror.