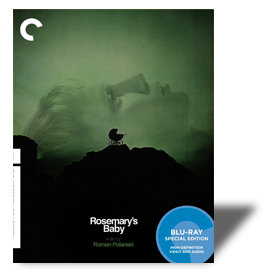 Rosemary’s Baby is still an atmospheric and scary thriller, but when it premiered in 1968 it was even more: a controversial shocker that generated water-cooler and cocktail-hour talk. Until that time, witches' covens, with a few notable exceptions like Burn, Witch, Burn and The Seventh Victim, had been portrayed as fanciful, exaggerated, and unbelievable. But Rosemary’s Baby brought witchcraft home by showing a coven as your New York City brownstone neighbors next door.

It seems improbable that anyone wouldn't know the film's basic story, based on Ira Levin's popular novel, but just in case, here's a quick take. Rosemary and Guy Woodhouse (John Cassavetes and Mia Farrow) move into a spacious New York apartment and find that their neighbors, Minnie and Roman Castevet (Ruth Gordon and Sidney Blackmer), are not only friendly but also a bit snoopy and manipulative. When Rosemary falls pregnant, it soon becomes obvious that sinister forces are at work and that the father of her child might not be her husband. The Castevets are such nice people on the surface that they make memorable villains, and we're surprised to find out just how evil they are. They are so convincingly acted (Gordon won an Oscar for her efforts) that you can accept them as ordinary, albeit eccentric, people who genuinely believe in Satan.

The film was a first for many reasons. It was Mia Farrow's first big feature film role, and she turned in a subtle, star-powered performance. It was director Roman Polanski's first American film (he directed only one other, Chinatown, before accusations of statutory rape caused him to flee to Europe). It was also the only movie that Polanski scripted from someone else's material. The movie paved the way for two other supernatural masterpieces, The Exorcist and The Omen. By the time the latter arrived, Satan was alive and well on contemporary movie screens.

Criterion has done an excellent job in producing this suspense classic for Blu-ray; this edition looks notably better than any videotape or DVD that has come before it. It has a fine grain throughout that gives it the look so admired by collectors, and it offers bountiful detail in hair, clothing, and furnishings. The picture is a little soft and dreamy at times, but intentionally so, perhaps to lull an audience into a false security before scaring the bejesus out of them. The mono audio track has been carefully cleaned up, and the uncompressed PCM result is effective for both dialog and music.

Without any carnage, foul language, or other sanguinary effects that have become standard in today's horror market, Rosemary’s Baby delivers real chills and a haunting portrait of a woman trapped by an unwanted, terrifying pregnancy. Criterion has made it possible for everyone to see the film properly in an expertly produced Blu-ray edition.

Be sure to watch for: Chapter 5 finds Rosemary looking at Minnie through her apartment-door viewer lens. Minnie is in curlers, and the shot captures every wrinkle on her face, as well as the cracked and peeling wall behind her. In short, great Blu-ray detail from front to back.