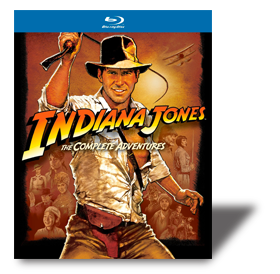 Indy Cracks His Bullwhip on Blu-ray

Many of the great adventure trilogies and quadrilogies have been released on Blu-ray, but we've been waiting for Indiana Jones to show up with his signature fedora and bullwhip. Now Paramount has released all four films, and all is right with the world. As far as action-adventure movies go, anyhow.

In case you escaped these Spielberg-directed movies, they star Harrison Ford as Indiana Jones, an archaeologist who will go to any length and face any danger to find a rare artifact. In the original Raiders of the Lost Ark, it's the Ark of the Covenant, a chest purported to contain the remnants of the original Ten Commandments tablets. Getting in the way of his search are Nazis bent on obtaining the rare treasure. The style is deliberately reminiscent of 1940s serials, which used cliffhangers to keep people coming back for the next installment. Raiders of the Lost Ark premiered in 1981, so the film is refreshingly more about classic stunts and stuntmen than it is about CGI.

The series stayed away from headline actors except for the third one, Indiana Jones and the Last Crusade, which successfully co-starred Sean Connery as Indy's father. That movie stands as second best to the original. Next in rank would be the second film, Indiana Jones and the Temple of Doom, which fans greatly appreciated and critics (unfairly, perhaps) drubbed. The last movie of the four was Indiana Jones and the Kingdom of the Crystal Skull, a frenetic affair in which there's simply too much action crowded into a small space. Also, too much of it seems borrowed from the earlier three movies.

Paramount has done a terrific job of transferring these crowd-pleasing films to Blu-ray, except for one thing, and I might as well get that off my chest first since it's the only negative you'll hear from me. The discs are housed in a book-style case that is then inserted into a durable hard-cover slipcase. The "book" has heavy cardboard pages, and the discs are inserted into these. I defy anyone to get them out without leaving fingerprints on them! So be careful and wipe the discs before reinserting them, which can be done without leaving fingerprints.

That one negative aside, the rest of the set is simply glorious and should please fans and newcomers alike. The video transfers are done with the care we usually expect from Criterion. The original movie has been restored under Spielberg's supervision and looks better than I've ever seen it, in or out of a theater. Colors are varied and true, contrast is A-plus, and there are no unwanted artifacts. The movie is a tad soft, but that was the film itself. If you want sharp as a tack, go to the third movie. Sound designer Ben Burtt remixed the audio for the original, and he improved it dramatically with more surround sound and deeper bass. The scene where the Nazis finally open the Ark of the Covenant has some really serious bass. That and the use of surround sound make the scene more exciting than ever.

The movies are on four individual discs, and there's a fifth disc devoted entirely to extras. There are production featurettes for each movie and many smaller documentaries on particular aspects of each film. I particularly enjoyed one on the stunts and stuntmen.

Indiana Jones is an adventure character as popular as James Bond, and Raiders of the Lost Ark reinvented and rebooted the action-adventure film. Thanks to Paramount and Blu-ray, Indy has arrived in home theaters looking better than ever. But is it really complete? What about The Young Indiana Jones Chronicles from television, starring Sean Patrick Flanery? Can we see another Blu-ray set on the horizon? Hopefully, but in the meantime we can be grateful for the four theatrical movies.

Be sure to watch for: The famous final scene of the first movie shows the crate housing the Ark being wheeled into an enormous warehouse. Thanks to Blu-ray's sharp focus, it seems endless and must surely have served as a model for television's Warehouse 13.