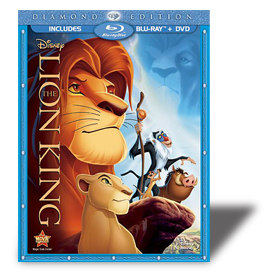 The Lion King has become one of Disney's most beloved animated feature films. I personally don't think it ranks at the very top, like Dumbo, Pinocchio, Snow White and the Seven Dwarfs, or Beauty and the Beast, but it's solid second-tier Disney. Still, "second tier" when talking about Disney means it's better than most animated titles from other studios. It has arrived on Blu-ray and DVD with loving care, displaying often spectacular results.

The film, set in Africa, is inspired by both Hamlet and the poem "Epic of Sundiata," and it's neatly divided into three acts. In the first we meet the adult lion Mufasa (majestically voiced by James Earl Jones), king of the jungle. His new lion cub, Simba (voiced by Jonathan Taylor Thomas), has been presented to all the jungle animals as the next monarch in the line of succession. This angers his uncle, Scar (voiced with delicious malevolence by Jeremy Irons), who wants to be king. When Mufasa is killed in a wildebeest stampede while trying to rescue Simba, Scar insidiously plants guilt for Mufasa's death in Simba's mind, telling him to run away as far as he can. Scar, supported by his army of hyenas, then realizes his desire and usurps the role of king.

The second act finds Simba about to die in the desert, but he receives help from Pumbaa (Ernie Sabella) and Timon (Nathan Lane), an appealing comedy team consisting of a warthog and a meerkat. They take Simba to a lush, green jungle far from the drier climate he called home, and over time the three become comrades and live a bucolic life summed up by their infectious "no worries" song ("Hakuna Matata"). But eventually Simba's childhood pal, Nala (Moira Kelly), comes to find him and convinces the now adult Simba (Matthew Broderick) that he must return home. Under Scar's rule, their land has become barren. Before Simba agrees to return, he and Nala find time to sing the loveliest song in the score, "Can You Feel the Love Tonight?"

The third act finds the prodigal lion returning home, where he fights for his position of leadership and gives his uncle a dramatic payback.

The songs by Elton John and Tim Rice and the orchestral score by Hans Zimmer (perhaps his best to date) move the story along, and the animation is for the most part excellent. Computer assist is evident in the group animal scenes, including the aforementioned stampede. Maybe we can blame it on the exceptionally high Blu-ray resolution (and the passage of 17 years since the original release), but those scenes seem "digital" to me (the grapevine has it that the stampede is much more cohesive and exciting in the 3D version, but I didn't have it on hand for comparison). The colors on the disc transfer are varied and accurate. A few scenes seemed a bit washed out, but I think that was the original intent. The sound is robust and clean, but it doesn't have too many lease-breaking low frequencies. The emphasis is more on clear dialogue and ambient sound, the latter serving to successfully draw the viewer into the picture.

There's a sometimes-entertaining commentary track with the two directors, Roger Allers and Rob Minkoff. Of interest to me was their discussion of the use of color, explaining why one scene might be washed in yellow while another is red and orange. There are also two handfuls of featurettes on the making of the film. The best ones are found innocuously nesting under the "Vintage Disney" button. I couldn't get this to pop up with any of my players other than the Sony PlayStation 3, but finding those featurettes was worth the effort. And I can't forget the outstanding still-frame galleries, which include hundreds of stills presented in HD that's often dazzling.

Another feature bears a little discussion. It's called "Disney Second Screen." You install a free app from the Internet that lets you link your computer or iPad with the movie. Then, as you watch the film, you can eyeball the smaller screen and learn backstage facts and trivia. This is apparently meant to replace the usual screen-in-screen presentation, which provides basically the same information. I found it very irritating to have to follow two separate screens at once, and screen-in-screen seems much easier to comprehend. Others might find "Disney Second Screen" useful. I hated it.

A DVD is included for those who don't yet have a Blu-ray player, and there's also a different box, not reviewed here, which includes a 3D Blu-ray, 2D Blu-ray, the DVD, and a digital copy. The Lion King features good storytelling and some outstanding voice characterizations. It would surely be a good investment that's family friendly and can be viewed many times.

Be sure to watch for: The bright orange and red final confrontation scene is memorable, as are the deep forest greens in the middle scenes. But my favorite is a night scene at chapter 19, which finds Simba pondering his destiny. He checks his reflection in a stream. The blues and greens are almost palpable, and then there's a drop of water that spreads a ripple. Real magic. These scenes are simply beautiful.