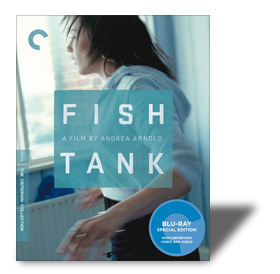 Gritty Film Finds Beauty and Heroism in an Unlikely Place

Andrea Arnold's name can now join those of Ken Loach and Mike Leigh on the list of masters of British social cinema, with Fish Tank exploring the lower classes that are caught up in housing projects the Brits call "council estates." Arnold is a remarkable filmmaker who sees detailed beauty in squalor. To break up the action or set up a new scene, she's liable to show a close-up of a set of wind chimes made from sea shells, a cherished photograph in a zodiac-decorated frame, or a stack of favorite CDs, indicating that there can be moments of color and substance in a largely drab and faded world. The many outdoor scenes are gorgeous, even when they're shots of industrial facilities, as if to say that life in general is better than life in the estates. Arnold makes great use of the single wind turbine that dominates the neighborhood like a strange and unfriendly giant.

At the center of the movie is Mia (Katie Jarvis), a 15-year-old girl entering womanhood. She's trapped in the estate, like a fish in bowl, with a younger sister (Rebecca Griffiths) and a boozed-up, chain-smoking mother (Kierston Wareing) who’s barely aware that her daughter is there. Mia’s horizons are finite and her life doesn’t look very rosy, but with the aid of a portable CD player she escapes into a private world of dance, creating moves to music, most notably Bobby Womack's version of "California Dreamin'." No one viewing her dancing would think she's destined for the stage. This isn't a movie where the ignored girl escapes her sleazy neighborhood and becomes a star. Mia leaves, but there's no indication that she won't be forced to return.

Mia’s mom brings new boyfriends home and stumbles on Connor (Michael Fassbender), who rocks Mia’s world and changes her situation. Connor is a thoroughly convincing opportunist whose name is a perfect fit. Aside from one other interesting character, Billy (Harry Treadaway), a teenage gypsy boy who befriends Mia, the film essentially belongs to Mia, and Jarvis gives one heck of a mesmerizing performance, especially when you consider that the untrained actress was discovered on a train platform shouting at her boyfriend! Director Arnold lets us know the characters deeply so that we care what happens to them, but she never intrudes with judgment or lessons. We see simply see Mia's world through her own eyes.

The Criterion Blu-ray looks wonderful. Colors are varied and true, contrast is fairly high, and focus is sharp and clear. Robbie Ryan, the film's director of photography, is credited, along with Arnold and editor Nicolas Chaudeurge, as having supervised and approved the Blu-ray transfer. His photography is on the highest level, and it's made it to home theaters looking as good as possible. The sound has received a fine transfer, too. The tracks are robust and sometimes immersive, though generally the sound is up front. The dialogue is sometimes hard to make out, but that’s due to the heavy accents, which are thick as a London fog. Thankfully, the closed-captioned English subtitles are easy to access and read. If you miss something the first time, you can back up and clarify it.

The main extras are three short films by Arnold: Milk (1998), Dog (2001), and the Academy Award-winning Wasp (2003), all enjoyable and worthwhile supplements. There's also a video interview with Kierston Wareing, an audio interview with Michael Fassbender, some audition footage, and an exquisite still-photo section by Holly Horner, the film’s set decorator. Unlike most stills, which seem to have been carelessly added as an afterthought, these are large reproductions with just as much detail as the film.

Fish Tank is a gritty, realistic drama, sumptuously photographed and directed by a woman who has a real eye for the cinematic. It won the Cannes Film Festival’s Jury Prize, and it’s a must-rent title that many might wish to own.

Be sure to watch for: In the middle of chapter 9, a flock of birds flying against a pale blue and white sky changes direction so you can sense the feeling of the group but also pinpoint each individual bird. The BBC played a role in producing Fish Tank, so perhaps the shot came from one of its fabulous nature series. Whatever the source, it’s an astonishing sight.