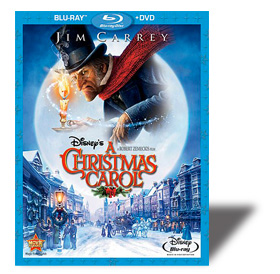 God knows, counting spinoffs and updating, that there are enough versions of Dickens' famous tale to keep a viewer busy for more than a day or two, but this motion-capture animated version is a welcome addition because it’s the best at presenting the ghosts. After all, the first edition of the book carries this complete title -- A Christmas Carol in Prose: Being a Ghost Story of Christmas. Various film versions have done well by this or that ghost, but this version does well by them all, and it lets them dominate the story while executing stunts that would be difficult for most stuntmen.

Once again, director Robert Zemeckis chose the motion-capture animated process, which he also used for 2004’s The Polar Express. The process is still far from perfect, though it’s getting better with time. In case you don’t know, mocap uses headpieces with four cameras to photograph each actor’s facial expressions, and they’re then filled in and adorned with computerized hair, skin, and costumes. The picture on this Blu-ray release was so clean and crisp that one could see both the advantages and disadvantages of the motion-capture process. Adult faces, especially men with hair on their face (of one sort or another), look convincing, but young faces look odd and slightly “off.” The technique hasn’t yet mastered skin, especially the not-yet-weathered skin of youth.

Jim Carrey stars in several roles (a number of the cast members play more than one part), and I was particularly impressed with his vocal talent. Scrooge doesn’t sound at all like Jim Carrey; he sounds like, well, Scrooge. Bob Hoskins is a natural as Old Fezziwig, and Gary Oldman, one of our most versatile actors, excels as Bob Cratchit, Jacob Marley, and Tiny Tim! The characters exist in a Victorian England that looks disarmingly splendid, with the aerial views of London being most impressive. The sharpness of the Blu-ray picture helps in their appearance, and the picture, in addition to being quite detailed, also has rich color, solid blacks, and excellent contrast.

The soundtrack is quite lively and immersive, utilizing all of the channels most of the time. There’s good boom and heft in the LFE channel, and excellent transparency and focus in the front three channels. The extras, however, are a mixed bag. Deleted scenes are presented in unfinished versions, and the production featurette is simply too “cute” to digest. The best extra is a picture-in-picture feature that lets you see the actual live motion-capture as it’s carried out by the actors and then compare it directly to the finished animation.

All in all, this Robert Zemeckis‒helmed version of the Dickens story can hold its own alongside distinguished versions of the past. It makes a very good holiday feature for home-theater viewing, and it contains a DVD version in addition to the Blu-ray. It’s also available in a 3D four-pack featuring the movie in Blu-ray 3D, Blu-ray, DVD, and digital copy.

Be sure to watch for: After a literally dark prologue with Scrooge at Marley’s coffin, the scene shifts to seven years later and the camera soars over and through the streets of London in shots that give an impressive illusion of depth, even without 3D.