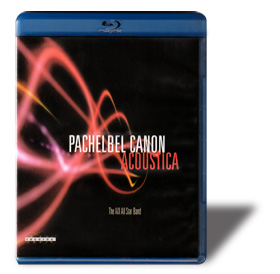 When I reviewed the AIX Records Audio Calibration Disc / HD Music Sampler earlier this year, I mentioned that the innovative company would soon have full-length Blu-ray Discs to satisfy our eyes and ears, and that promise has now come to pass. Pachelbel Canon Acoustica is one of two new Blu-ray releases from AIX, the other being Chamber Music Palisades -- Shostakovich / Debussy / Brockman. For Pachelbel Canon Acoustica, the virtuoso AIX All Star Band played a 45-minute improvised set of variations on the chord changes established in the famous Canon by the baroque composer Pachelbel. The main idea was to use elements and styles from electronic composition but to record the instruments acoustically. Though the program notes claim the performance was a single take without rehearsal, everything is so tight and precise that you’d never know it. The virtuoso musicians involved include Laurence Juber, acoustic guitar; Carl Verheyen, electric guitar; Jim Cox, piano; Cliff Hugo, acoustic bass; Alberto Lopez, percussion; and John Ferraro, drums.

Though the piece rises to great heights once or twice, it’s basically very quiet. In fact, it’s so quiet at times that I found myself doubting it could be done without digital equipment. Producer Mark Waldrep, who was also the audio and mixing engineer, as well as the video editor on several other titles, has become a master at recording acoustic music, and I can’t fault any part of the recording -- it has thoroughly satisfying presence, clarity, and definition, and it has perfect balance among instruments. Waldrep, unlike most engineers these days, has chosen to use Dolby TrueHD 5.1 rather than the more popular DTS. I’ve heard little difference between the two systems when they’ve been offered side by side, and Dolby works just fine here. Waldrep has provided both audience and stage mixes in Dolby TrueHD, as well as a PCM two-channel mix. All of the sound mixes are 24-bit/96kHz, and they all sound wonderful, though I preferred the Dolby TrueHD stage mix because it seemed to transform my entire listening area into a small auditorium. The HD video makes for a clean, crisp picture that gives you a privileged and intimate look at just how the players make their wonderful sounds.

A sampler disc that came with Pachelbel Canon Acoustica has HD cuts from 21 different albums, including such artists as John Gorka, Albert Lee, and Steve March Tormé, all of which prove that the time has finally arrived when we can experience both state-of-the-art video and audio at once. Other music producers please take note.

Be sure to listen to: The second section, Gaia, has droning chords from the keyboard and bass while guitars improvise filigree over them, all of which is gently peppered by percussion and drums. Though it’s all very quiet, there’s a lot going on, and the transparency and resolution on the audio tracks is almost uncanny.