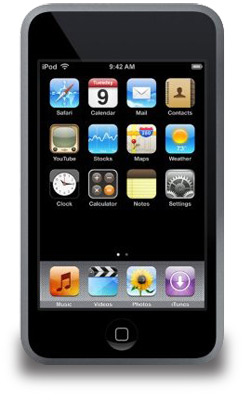 As a broke graduate student in a down economy, I really like free things. I take great joy in finding events on campus where free pizza is offered as an inducement to get students to show up -- it works on me. There are few things finer than the one free refill and the wide-open WiFi at the coffee shop. I even look forward to Wednesdays, when the free weekly newspaper (with crossword puzzle) hits the stands. If it’s free, I’m there.

That’s why I was so excited when I purchased my Apple MacBook laptop and got an iPod Touch thrown in at no cost. It was quite a deal.

The Touch is quite similar to its older sibling, the iPhone; basically, it’s a computer you can slip into your pocket. However, the Touch does require WiFi access to perform its online functions. Using its touchscreen, you can surf the Internet, browse through photos, watch movies, and send e-mail. But on top of all of that, an ever-growing number of applications similar to the programs you run on your computer are being developed by Apple and other software companies for use with the Touch. In fact, Apple has dedicated an entire App Store to these applications; it’s part of Apple’s always-growing iTunes Store. Some of the apps available for download are fun -- there are tons of games, some of them totally ridiculous (in Hold On!, you simply hold your finger on the screen for as long as you can) -- but others are quite useful.

I’ve already established, at least to my own satisfaction, that free is good. What’s cool is that many of these Touch apps are available at absolutely no cost. Sometimes they’re only trial versions, but in some cases, free really does mean free. One of my favorites is Paper Toss, from Backflip Studios, in which you try to flick little virtual balls of paper into a wastebasket while compensating for the virtual breeze whipped up by a virtual electric fan. Paper Toss is fun to play while I’m waiting for my ramen to cool, but what I focus on here are free apps that are functional and handy.

My parameters for what constitutes “functional and handy” are a bit broad. Generally, I simply mean apps that aren’t games. For example, my iPod doesn’t have a tuner; when I began looking for free and useful apps, one of my first orders of business was to find a way to listen to the radio with my Touch. There are a number of options for listening to streaming music on the Touch, but the two most popular free apps are Slacker and Pandora.

A problem I’ve always had with using Pandora on my computer is in fine-tuning the stations to play only music that I’ll likely be interested in hearing. Often, this is a time-consuming process -- you have to diligently give the thumbs down to music you don’t like over a number of listening hours before Pandora figures out what you’re looking for. Slacker, on the other hand, lets you provide a good deal more information about what you want to hear before you even begin listening. The result is less time spent skipping songs you don’t like. Unfortunately, on the Touch, the interface for the Slacker app isn’t as good as the one for Pandora, which is less cluttered and simpler to navigate.

Ultimately, both of these apps are very useful, and go a long way toward making up for the fact that the Touch lacks a tuner. Were it possible to combine the Pandora interface with Slacker’s more advanced settings, you’d have the perfect streaming-audio player for the Touch. Since this isn’t possible, I’ve decided to just deal with the clunkiness of the Slacker interface in exchange for this service’s greater adaptability. 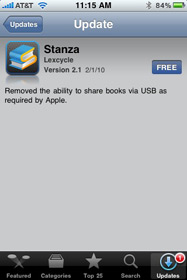 The Touch as e-reader?

The Amazon Kindle, now all the rage, is leading the way for a whole slew of brand-new e-book readers. Trading typical paper pages for a small screen on which to view text, e-readers let you carry a shelf’s worth of books in a handheld device roughly the size of a paperback. I’ve been wanting to try one of these newfangled gadgets for some time, but have yet to lay hands on one. I did, however, discover a number of apps that basically turn the Touch into an e-reader.

As someone with a couple of overflowing bookcases, I wouldn’t mind never having to move all those pounds of paper again, but I’ve always had my doubts about reading on a screen. However, reading a book using the Stanza app, from Lexcycle, is surprisingly easy on the eyes, even in the dark, and the selection of books available for download is impressive. In addition to the app itself being free, there are unabridged classic books that can be downloaded at no charge. Additionally, any number of current best sellers are available for purchase through the app. I haven’t yet read an entire book on my Touch using Stanza, but the next time I’m on a long trip, I’ll give it a shot. 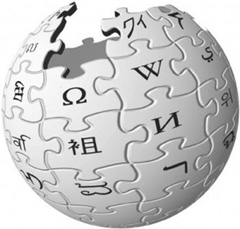 I am a Wikipedia junkie. Although I know this user-edited encyclopedia is not always the best source for reliable information, I find it useful for getting me started in the right direction to figure out what I want to know. And, of course, it’s fun to just follow the links from entry to entry and see where you end up.

The Wikimedia Foundation, the creators of Wikipedia, have created a free app that lets you easily search the “encyclopedia that anyone can edit” on your iPod, and it has quickly become one of my favorite apps. If I’m waiting for someone, I can surf Wikipedia. It’s also really handy when I’m out with friends and can’t remember some bit of trivia. 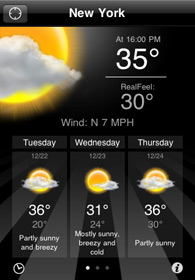 Weather on the Touch

There are few things of more basic, practical use than checking the weather before heading outside, but some days, in my haste to get out the door, I don’t always manage this simple task. Now there’s an app for it. Accuweather.com provides a free and nice-looking app that has up-to-the-minute weather information. You can even watch videos of forecasts for your area. 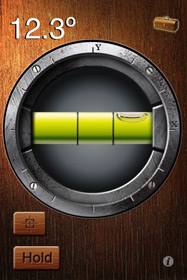 I’m not much of a painter, but every now and again I like to frame and hang something I’ve done. Invariably, I have trouble getting the picture to hang straight on the wall, yet for some reason I’ve never invested in a spirit level. Luckily for me, iHandySoft has come up with the free iHandy Level app for the iPod Touch. This virtual spirit level is quite accurate, and the look of the interface is attractive. It may seem strange to use an MP3 player as a carpentry tool, but it’s surprising how handy this app can actually be.

Each day, Apple and an ever-expanding list of software developers make available new and useful apps for the iPod Touch -- and a great number of them are free. If, like me, you have a Touch but lack the spare change to buy pricier apps, don’t be bummed out: The App Store proves that, sometimes, you can indeed get something for nothing.