Does a Product's Backstory Matter?

A YouTube video I recently watched got me thinking more deeply about my work than I have in a while. No, it wasn’t a video by some great audio scientist or famed writer or philosopher of aesthetics. It was a program from VH1 Classic’s series Rock Icons 2015, featuring none other than Officer of the Order of Canada (and Rush bassist and singer) Geddy Lee -- and he wasn’t even talking about sound. 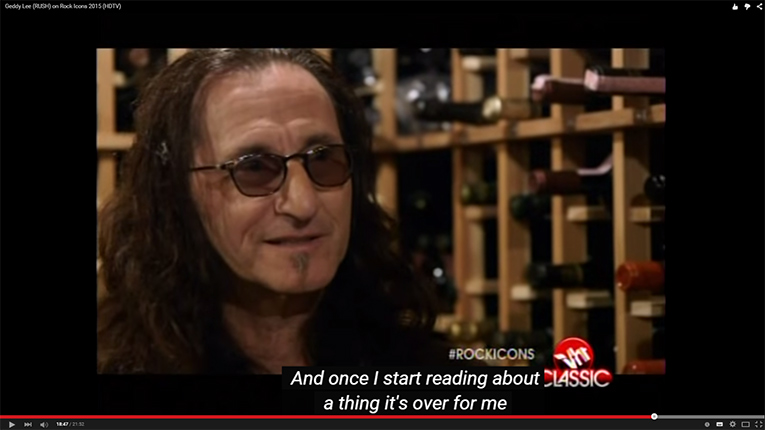 About 18 minutes into the video, Lee discusses his enthusiasm for wine and shows off his impressive cellar. He explains that he became interested in wine because the band got lots of it as gifts from rock promoters, and after amassing a stockpile, he decided to read up on the subject so he could get it all organized. One thing he said really stuck with me: “You drink the wine, and after you know a little bit about its background, it tastes better.”

It’s easy to pick that statement apart. The physical interaction of the wine with your nose and taste buds is the same no matter what you know or don’t know about the wine. Sure, if you know that a certain wine is famed for its notes of apricot, avocado, and roasted squirrel, you’ll be more alert to those flavors as you swirl the wine around your mouth -- but you’ll also be introducing a strong confirmation bias. Stereo salesmen have long known how to influence perception by beginning a demo with a description of the sound the listener is about to hear; I’m sure the same trick works with wine.

Ultimately, though, I think Lee made a great point. Regardless of confirmation bias, there’s no doubt that the experience he would have with a glass of Premier Grand Cru Château Latour, whose backstory he knows, would be far richer and more gratifying than the experience a dinner-party guest, swilling whatever the host pours and ignorant of the wine’s provenance, would have with the same Bordeaux.

I’ve never been a fan of such ultra-old-school gear as single-ended tube amps and speakers with full-range drivers. I do know many people who enjoy those products, and I’ve always wondered if they’d like them as much if they didn’t know what they were hearing -- if they didn’t know the backstory. But after considering Lee’s point about wine, I wonder if it matters.

An example: My friend Steve Guttenberg, who writes the column “Audiophiliac” for CNet, loves Zu Audio speakers. Zu uses full-range drivers augmented by a supertweeter, and they’re one of the coolest companies in audio -- if you go to a hi-fi show, never miss their demo. But as with all speakers using full-range drivers, Zu speakers’ frequency responses (the relative evenness of each frequency of sound, measured at a specific point with the reflections from other points absorbed or electronically removed) and power responses (the same thing, but measured in a sealed, reverberant chamber so the entire output of the speaker is captured) are very uneven.

Zu Audio Druid on- and off-axis frequency responses
(measured by SoundStage! in 2002)

Decades of tests conducted by famed audio scientist Dr. Floyd Toole, first at Canada’s National Research Council and later at Harman International, show that listeners tend to prefer speakers with a smooth, even frequency response on axis, and a smooth power response that decreases gradually as the frequency rises. Revel’s Performa3 F206, which I use as my main reference speaker, conforms to that ideal, as do most speakers from Definitive Technology, GoldenEar Technology, Infinity, JBL, PSB, and several other esteemed brands that follow Toole’s advice. When all biases are removed, it’s likely you’ll prefer Revels to Zus. But once you step out of the blind-test lab, you’re wallowing in biases instilled by a product’s appearance, marketing, reviews, etc.

Revel Performa3 F206 on- and off-axis frequency responses
(measured by SoundStage! in 2014)

Does Steve Guttenberg enjoy Zu Audio speakers any less than I enjoy my Revels? Not at all. In fact, I speculate that he enjoys them more. He knows they’re special, distinctive, and different, and he relishes that difference.

I know my Revels are nearly perfect, and I marvel at their excellence every time I listen to them. But sometimes there’s more joy in embracing a product with character. It’s no different from buying a Ducati motorcycle instead of a Yamaha, a Gretsch guitar instead of a Gibson, or a Leica camera instead of a Canon.

The problem arises when the guy who buys a piece of idiosyncratic gear thinks he’s somehow better than the guy who bought the technically perfect gear. Or vice versa. I strongly recommend that audiophiles listen to both types of gear, and buy whatever they most enjoy, regardless of why they enjoy it.

It works for Geddy Lee. What stronger endorsement could one need?