iHome makes a wealth of Bluetooth speaker models, many of them including light shows. I ordered the Playtough Pro iBT158 ($79.99 USD) for its intriguing light-show rings and because it’s waterproof and dustproof.

The Playtough Pro iBT158’s colorful box bears a life-size image of the speaker and plenty of claims about its features. Inside are the speaker, a USB-to-Micro-USB charging cord, and a quick-start guide.

True to its name, the Playtough Pro is ruggedly built. A squat cylinder that’s 4″ in diameter at the bottom and tapers to 3.5″ at the top, it weighs 1.5 pounds. It’s wrapped in a fine-mesh grille of hard plastic, with endcaps of hard rubberized plastic. The color scheme is gray and black, and other than an iHome logo at the bottom, the Playtough is unadorned. In the side of the bottom endcap is a watertight port that, unsealed, reveals a Reset button, a Micro-USB charging jack, and a Bluetooth pairing LED. Two rings of LEDs, between the endcaps and grille, encircle the speaker at top and bottom. Near the center of the grille is a blue LED that lets you know the Playtough is functioning and paired. 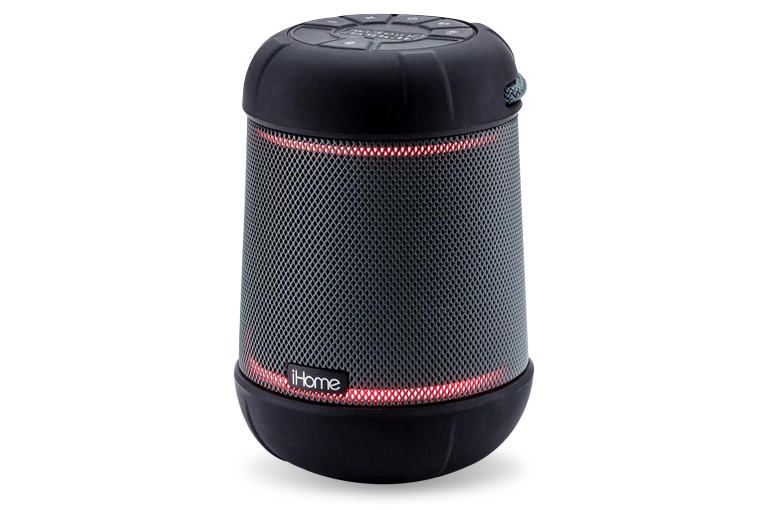 Threaded through the top endcap is a bungee cord that can be stored inside the cap when not in use. On the top endcap, in a semicircle from 9 to 3 o’clock, are five controls: buttons for Power, Volume Up and Down, Play/Pause/Next/Previous/Speakerphone (tap twice for Next, thrice for Previous), and Color Mode/Battery Level: Slow/Fast/One Color/Pulse to Music/Preset Pulse/Off. Held down, this button gives a verbal report of the charge status of the iHome’s lithium-ion battery. Below these five buttons, at 6 o’clock, is a sixth, for Voice Control, with which the Playtough can be operated using a voice assistant: Siri, Google Assistant, or Alexa.

The iBT158 has two 1.5ʺ drivers and a passive radiator, and iHome says that its little amplifier outputs 5Wx2 RMS. (Despite that last spec, the Playtough Pro is a mono speaker.) The dust/waterproofing level is IP67, which iHome claims “Provides maximum protection from moisture: up to 30 minutes in 1 meter of water and prevents any dust from entry.” iHome claims 13 hours of playing time on a full battery charge, but I found that this depended on the volume level and whether or not I activated the light show—of course.

The Playtough Pro iBT158 was straightforward to use. Despite its relative heaviness, I could pick it up in one hand; those with smaller hands might want to use its retractable cord. The rubberized bottom ensured that the Playtough stayed put even when played loud, and its waterproof rating made it possible to take it into the shower with me. If placed in a pool of water, it floats.

The Playtough Pro paired instantly with my Apple iPod Touch, after which I never had to pair it again. All controls worked as explained, though I found it irritating that I couldn’t leave Alexa on—I had to press the Voice Control button each time I asked a question. The light show was intriguing and somewhat hypnotic, depending on the music played and the setting. But it can be turned off, and when you do, the battery charge will last longer. But you can’t turn off that central blue LED.

The Playtough Pro could play fairly loud—loud enough for my purposes. Its midrange was solid and intelligible, with highs that were clean if slightly rolled off. And augmented by that passive radiator, the iHome’s little 1.5″ drivers could put out more upper bass than I expected. Considering its small size and mono sound, it proved successful with a wide variety of music. 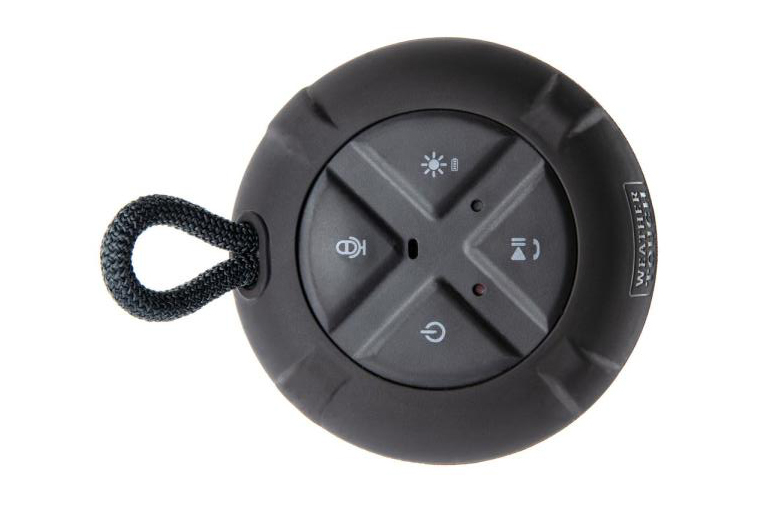 One of my favorite bands is 10cc. I played their second UK single, from 1972, the neo-doo-wop “Johnny Don’t Do It” (16-bit/44.1kHz FLAC, Glam/Amazon Music HD). The bass and drums lacked the punch and depth you’d hear from a bigger Bluetooth speaker—I couldn’t physically feel the bass—but the midbass was rock solid, and the voices floated easily above the lower frequencies without being muddied. And the spoken bits later in this track were clean and clear. All in all, a satisfactory performance by the little Playtough Pro.

I was surprised by how good classical music sounded through the iHome. Brahms’s Piano Concerto No.2 begins with alternating solo passages for ethereal horn and piano. As I listened through the iHome to a recording by pianist Emil Gilels, with the Berlin Philharmonic led by Eugen Jochum (16/44.1 FLAC, Deutsche Grammophon/Amazon Music HD), the horn’s wonderful tone sounded quite true, as did the piano’s. And a bit later, when the entire orchestra enters, the sound was far better than I’d expected—I missed only a slight bit of bass. Everything else was reproduced appealingly, with no distortions of tonality bad enough that I wanted to turn it off.

I sampled a few of Beethoven’s solo-piano sonatas in performances by Alfred Brendel (16/44.1 FLAC, Decca/Amazon Music HD). The results were good. Any thinness in reproduction can ruin the sound of an acoustic piano, but its sound through the Playtough Pro was full-bodied, with enough detail to make it lively. And with these selections I found the dynamic range quite impressive, again belying the iHome’s size. 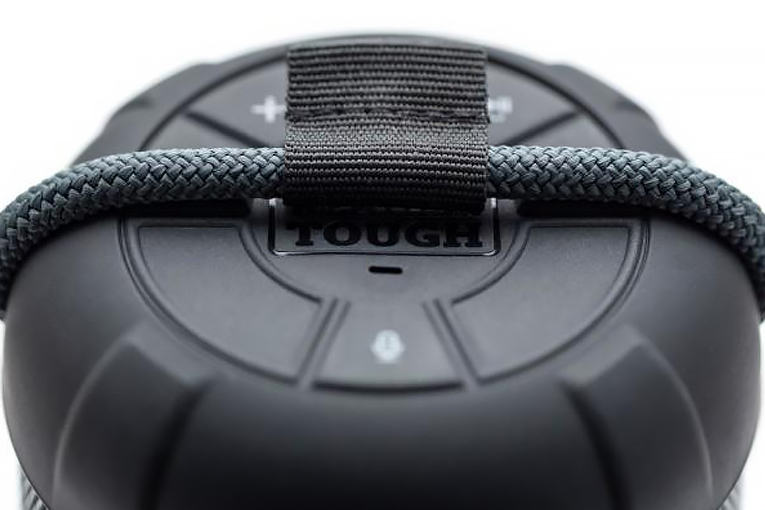 Though I began this evaluation with no thought of using the Playtough Pro for anything other than background music only, after a while I found myself putting everything aside and just listening to it. That says a lot.

iHome’s Playtough Pro iBT158 has a lot going for it. It’s rugged, waterproof, dustproof, easy to use, and sounds very good for its size with a variety of musical genres—and it puts on an intriguing light show, if that’s your thing. Its list price of $79.99 might be a bit high, but you can find it for half that online, which makes it a good bargain indeed.