Streaming music files used to be for listeners who cared more about quantity than quality. Times have changed. In the past ten years, various streaming services have begun offering files in resolutions of CD quality or above. At $189 USD, Audioengine’s B-Fi multiroom music streamer offers a simple, inexpensive way to receive and distribute CD-resolution files. The B-Fi has dramatically changed the way I listen to music. 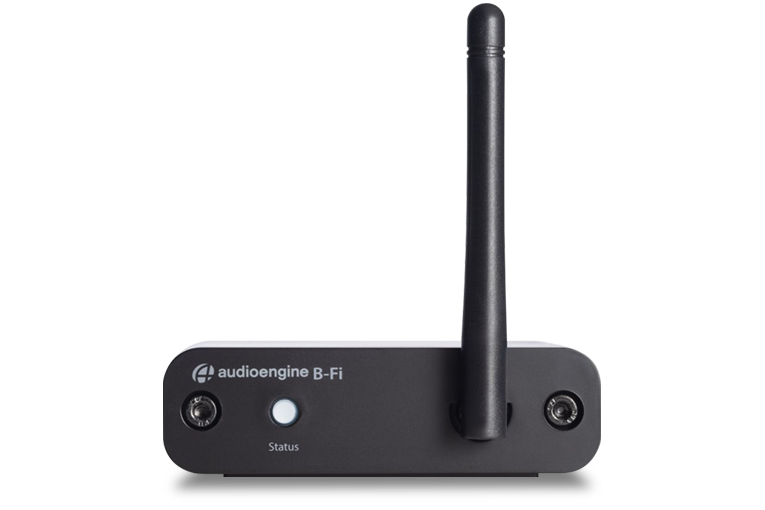 The B-Fi comes in a simple lift-top box, each of its contents occupying its own compartment molded into a single piece of Styrofoam: the B-Fi itself, a 42” stereo audio cable, a wall-wart power supply with detachable cord (USB Type-A to Micro), a microfiber storage bag, and a quick-start guide.

The B-Fi weighs only five ounces and is about the size of a pack of cigarettes: 3.5”W x 1”H x 3”D, or 3.75”H with its antenna pointing straight up. Its corner edges are gracefully rounded, and its aluminum case is white, with black plastic front and rear endcaps. The two bolts that hold the B-Fi together run all the way through the case, from front to back; the heads are plainly visible front and rear, giving it an industrial look. The pivoting antenna is permanently fastened to the front panel; other than that and the company and model names, the only thing on the front panel is an illuminated power button. On the rear panel are right and left analog outputs on two very-high-quality RCA jacks, a digital output (TosLink), and a jack for the 5VDC power supply. That’s it. 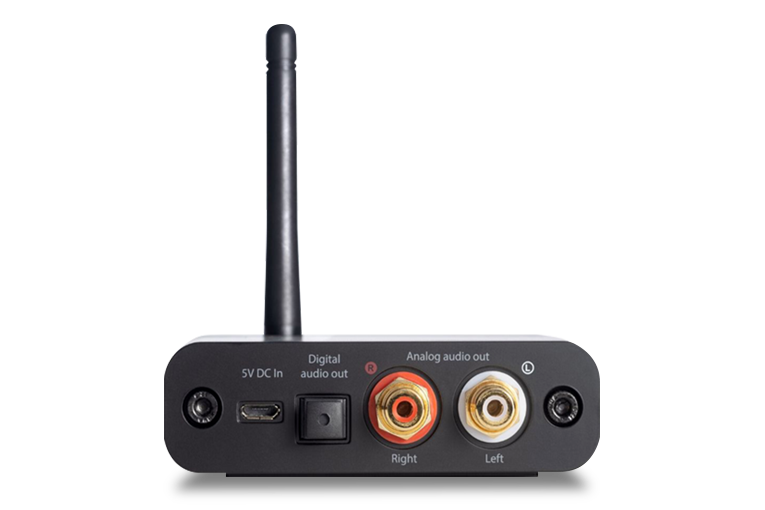 Built-in apps include those for iHeartRadio, Napster, Qobuz, QQ Music, Tidal, TuneIn, and Ximalaya -- units from the B-Fi’s second production run will also include Amazon Prime Music. That app and any future additions will be made available through a firmware update for earlier units. Apple AirPlay compatibility is included for accessing such third-party apps as Pandora and Amazon Music HD.

The B-Fi doesn’t receive via Bluetooth -- it’s strictly a Wi-Fi streamer. Entirely wireless in operation, it lacks an Ethernet port for a wired connection to the Internet. It can be used with Audioengine’s free app, which is available from the Apple App Store or Google Play and requires an operating system of iOS 10.0 or later, or Android 5.0 or later.

Audioengine is a small independent company based in Austin, Texas. All of its support team are US-based, and they promptly answered my questions. They showed what a support team should be and seldom is.

Setting up the B-Fi and getting it connected to the Internet was simpler and easier than with any other such device I’ve encountered. Download the Audioengine app, make sure an analog or digital interconnect is plugged into an input on your receiver, preamp, or powered speaker, follow the voice prompts to add the B-Fi to your Wi-Fi network, and you’re ready to start listening. From the app’s home menu you can choose Favorites, My Music, Search, or any one of the preinstalled streaming-service apps. The My Music option in the B-Fi app lets you access files stored locally on your phone, or from any DLNA/UPnP-enabled network attached storage (NAS) device.

Select one of the preinstalled apps and you’ll be taken to the home page of that streaming service. I tried Qobuz and Tidal for a while, but preferred Amazon Music HD and Primephonic, the latter a hi-rez service exclusively devoted to classical music. For these I had to open AirPlay; when I did, everything worked fine. The only problem I have with AirPlay is a delay of one or two seconds after you’ve commanded it to play a title but before that title starts playing. This is of no consequence once an album begins playing, as it doesn’t add any delay between tracks. 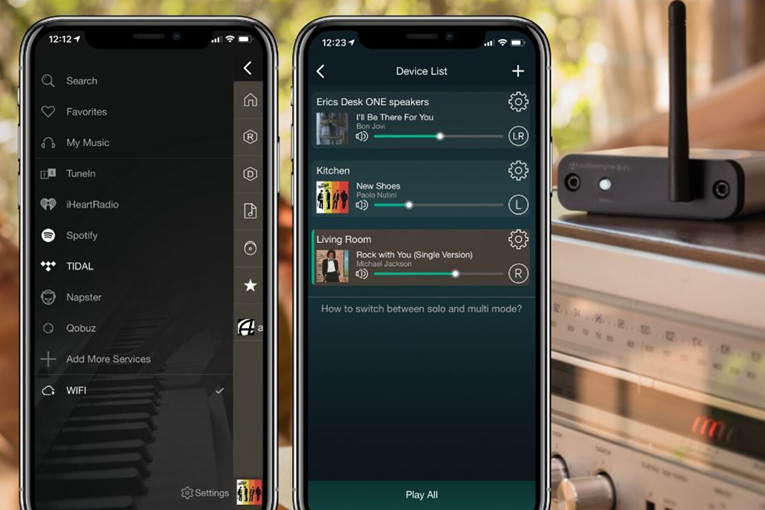 Although most of the provided apps are for streaming services that require monthly or annual subscription fees, most of these offer 30-day trial periods -- you have plenty of time to decide which one(s) you want to pay for. Most charge about $15/month for CD quality and above. Compare that with the costs of when all you could buy were physical discs: $15 might get you one or two CDs. With these services, $15 gets you the whole store.

I’m glad Audioengine includes the two radio apps. TuneIn, in particular, is a gateway to Internet Radio, offering thousands of stations from almost every nation, programming every sort of music plus news, talk, and just about anything else you’d ever want to hear. And it’s free.

In addition to a recent operating system, you’ll need a reliable Internet signal. You’ll find different stats in different places regarding this. I found that at any bit rate below 18Mbps, music would start to stutter through the B-Fi.

If you have multiple B-Fi streamers, you can use the Audioengine app to stream music to them in various rooms. You can have stereo using two powered speakers, or you can play different music in your listening room and the kitchen. I was sent only a single B-Fi, but I could control it from anywhere in the house with my iPod Touch. Right now as I sit at my computer, Touch in hand, I can control what music is playing through my main audio system at the other end of the house.

As far as sound quality was concerned, the B-Fi shone. By providing both analog and digital outputs, Audioengine gives you the choice of using the B-Fi’s DAC or one in your stereo system. The B-Fi’s DAC proved far superior to the one in my Yamaha RX-V581 A/V receiver, so I used the B-Fi’s analog outputs and was treated to the considerable pluses of the Sabre ES9023 chip. The sound was tightly focused yet transparent, with solid bass, sweet and sparkly highs, and a revealing midrange presence. I felt I was hearing my recordings anew. In this period of self-isolation due to COVID-19, the B-Fi refreshed my listening experience just when I needed it. 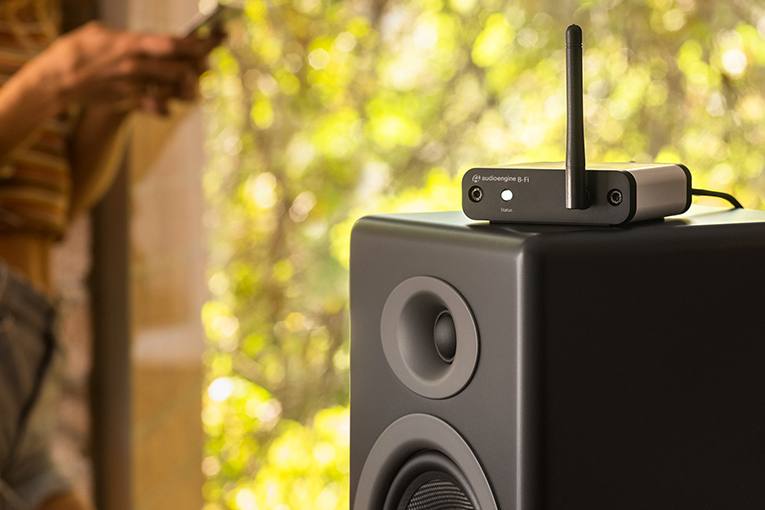 My listening experience varied depending on the recording played. The B-Fi revealed more from good recordings than I’d heard before, as well as hitherto unheard flaws in poor recordings. It was CD quality all the way, as both AirPlay and the B-Fi limit the resolution to 16/44.1. But given the quality of the Audioengine DAC, this was enough to make my listening sessions stupendous.

Puccini’s Turandot, unfinished at the composer’s death, is richly and complexly scored, and conductor Zubin Mehta’s 1972 recording of the opera with the London Philharmonic is, for many, the final word (16-bit/44.1kHz FLAC, Decca/Primephonic). The cast includes such stars as Joan Sutherland, Luciano Pavarotti, and Montserrat Caballé, each voice recorded in perfect balance with the large chorus and orchestra. Extremely loud passages for chorus and orchestra alternate with sweet, tender, quieter moments with, say, just a single woodwind playing. Hearing it through the B-Fi’s DAC was a galvanizing experience. As little details popped up all over the place, I thought, again and again, Wow, did I miss that before?

Singer-songwriter Harry Nilsson (1941-1994) never achieved superstar status, but his recordings have proven durable and are often used in film soundtracks and commercials. Son of Schmilsson (16/44.1 FLAC, RCA/Amazon Music HD) is a quirky mix of original rock and pop tunes interspersed with cavernously recorded sound-effects interludes from producer Richard Perry and his engineers. Nilsson’s distinctive voice was immediately recognizable through the B-Fi, but the rich sound was so incredibly transparent that I noticed the instrumental playing more than ever. It was like hearing this album for the first time.

Likewise with “We Have No Secrets,” from Carly Simon’s No Secrets (16/44.1 FLAC, A&M/Amazon Music HD). The instruments, including the bass guitar, sounded as clean as could be, and the backing singers voicing the clever refrain were crisp and intelligible. Hearing this song through the B-Fi DAC left no doubt that one of those voices was Mick Jagger’s.

If you have a phone or other device with a recent operating system, a reliable Internet connection, and a stereo system you love, you owe it to yourself to try out the Audioengine B-Fi. Thousands -- perhaps millions -- of high-quality audio tracks await your pleasure. The B-Fi can unlock them all, and give new life to titles already in your collection.

I have no interest in finding more places to store physical media. Thanks to the B-Fi, I now have access to all my favorites in the palm of my hand. Yes, Sonos can do this, but at considerably higher cost. If you’re looking to put some excitement into your listening experience, the Audioengine B-Fi seems a must.