Nothing gets me started in the morning like a brisk shower, especially when accompanied by Vivaldi or Vampire Weekend -- and it’s surprising how many waterproof shower speakers are now available to assist me. I recently reviewed the Jensen SMPS-626; and now it’s the turn of the new DuoTen.

Like so many products now made in China, the DuoTen has been licensed to various US distributors, to be marketed under different brand names. The version reviewed here is sold for $32.99 USD under the DuoTen brand, distributed by the JMS Group through Amazon.com.

In the shipping box, a 4” cube, are the DuoTen itself, a USB-to-Micro-USB charging cord, a small telescoping antenna, a quick-start pamphlet, and two credit-card-size notices: one explains how to pair a second DuoTen for stereo sound, and the other invites the buyer to join the JMS Group VIP Club, which offers special deals and lifetime warranty support. The latter seems a bit suspect -- you’re directed to visit a website that asks for your name and e-mail address but provides no information in return. I’d skip it. If you want an extended warranty for your DuoTen, get it from Amazon or wherever you buy it, as often works best for such low-ticket items. 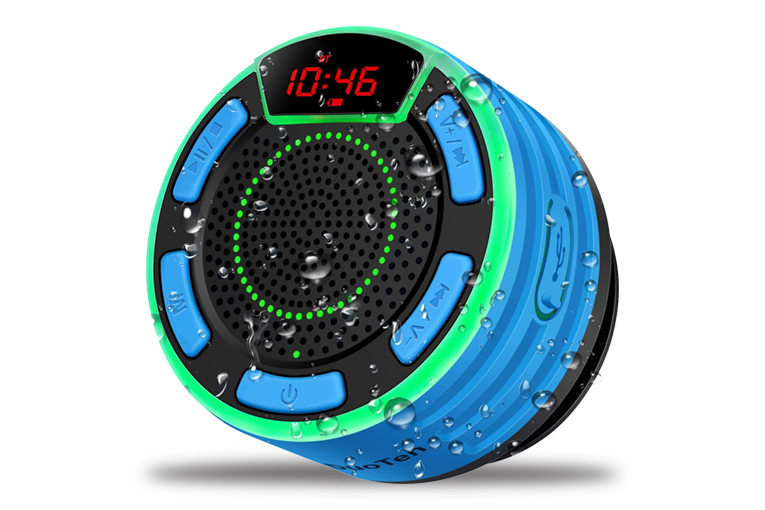 The DuoTen itself is a squat cylinder measuring 3.82” in diameter by 2”H (or 2.95”H with suction cup attached) and weighing 8.2 ounces. It’s made mostly of blue plastic, with bottom and top surfaces of black rubberized plastic, and its controls are on top. It seems well built and made to last. The box indicates that it’s available in red, yellow, and gray, but I didn’t find those versions for sale in the US.

Most of the top surface is given over to a 1.75”-diameter grille perforated with concentric circles of tiny holes, surrounded by a small screen and five curved pushbuttons in more blue plastic. The screen’s red characters display the time (in Bluetooth mode) and the frequency of the radio station selected (FM mode) -- and, in either mode, the volume level in arbitrary increments (“0” through “30”) and the remaining battery charge.

Most of the buttons are multifunctional, depending on the mode you’re in and if you give them a short or long press. At bottom, or 6 o’clock, opposite the display, is the power button, which also controls the light show produced by a ring of LEDs around the DuoTen’s rim, and a smaller ring of LEDs midway around the grille; under this button is the built-in microphone, for phone calls. The cycle of colors displayed -- dark blue to gray to red to green to yellow to purple to light blue -- can be set to sequence slowly or quickly, and the slow sequencing can be set to sync with the rhythms of the music played. You can also turn all lights off other than the display, which remains illuminated as long as the speaker is in use.

At 8 o’clock is the mode button (Bluetooth or FM), and at 10 o’clock is a multifunction button that can be used for Play/Pause, to answer or end a phone call, or to search FM stations. The button at 4 o’clock is volume down, or press and hold to go back a track. The 2 o’clock button is volume up or next track. Changes in volume are also indicated on the display, something seldom found on cheaper Bluetooth gear.

On the DuoTen’s underside are a grille and LED display similar to the ones topside. But only a portion of the holes are open, indicating something like a bass port. These are mostly obscured by a suction cup 3” in diameter that screws into a 1/4” socket -- remove the cup to attach the DuoTen to various mounts. The DuoTen comes with a 9” lanyard attached to the top, for hanging it from a hook or shower head.

The connectors are on the DuoTen’s left and right flanks: a Micro-USB port for the charging cord, and a connector for installing the antenna. These ports’ tethered seals must be carefully secured before exposing the DuoTen to wet conditions.

Speaking of waterproofing, the DuoTen is rated IPX7, which means (per JMS Group) that it can be submerged in 3’ of water for half an hour, and that it can float on the surface indefinitely while still playing music. Other specs: Bluetooth v.5.0, a frequency range of 120Hz-22kHz, signal/noise of ≥85dB+2dB, a power output of 8W driving the single driver, a charging time of about two hours, and 8 hours of playing time on a full charge.

For the most part, using the DuoTen was logical and straightforward. Hold down the power button a few seconds -- you hear a musical sound, the screen flashes “Hi,” and the DuoTen is on. Fully booted up, it defaults to Bluetooth pairing mode. The first time you pair it, you’ll need to follow the usual pairing procedure, but from then on pairing should be automatic, as long as your Bluetooth device is powered on. The volume level, for both Bluetooth and FM, defaults to “19” in the full range of 0-30 -- moderately loud.

Setting up FM playback is quite easy -- so long as you don’t read the directions. Select FM mode, then press and hold Play/Pause. The DuoTen then scans for FM stations and gives each one it finds a number -- 1, 2, 3, etc. You then use the volume buttons to tune in the desired station. (On turn-on, the DuoTen remembers the last station you tuned in.) 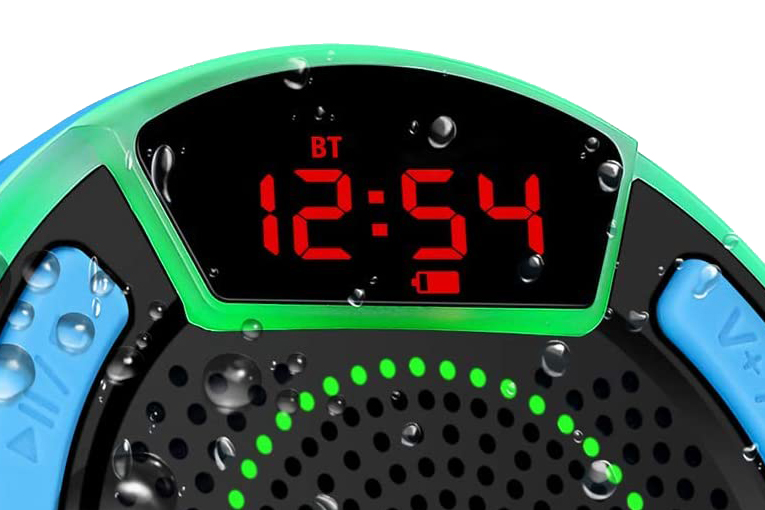 Setting the clock is easier. Press and hold Select Bluetooth/FM, then use the volume buttons to change the time, which is displayed in 24-hour military style; there seems no way to set it to 12-hour mode.

The suction cup proved very stable. It wouldn’t budge from the smooth fiberglass wall of my shower stall until I gently pried up one side to break the seal. But even this proved unnecessary -- to remove the DuoTen for charging, all I had to do was twist the speaker counterclockwise to detach it from the cup.

I tried floating the DuoTen in my filled kitchen sink, and sure enough, there it merrily bobbed, playing music. In Bluetooth mode, to prolong the battery charge, it automatically shut itself off after a few minutes of not receiving an audio signal. It announced its departure with musical tones -- but the screen didn’t display “Bye.”

I live in a hilly area where good FM reception is problematic. Nonetheless, the DuoTen had no trouble -- its antenna helped a bit, but I didn’t really need it. Bluetooth mode was rock steady. I could go from one end of the house to the other with no dropouts. But mostly I left the DuoTen anchored to my shower wall. 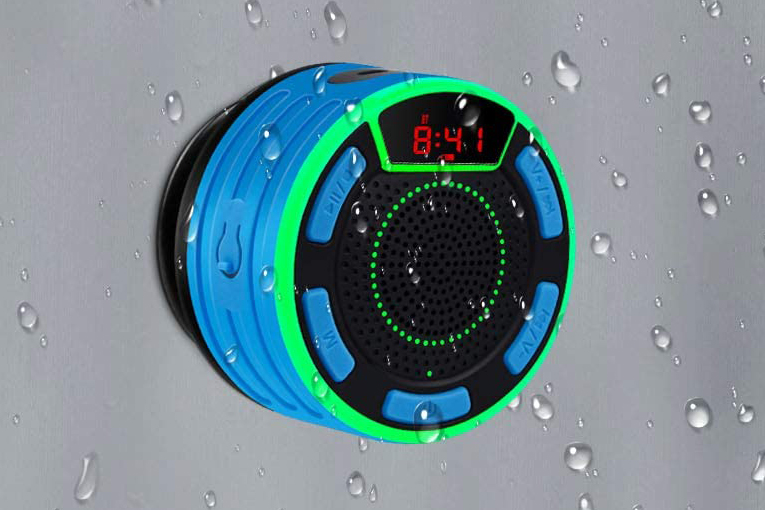 As expected with so small a speaker, the DuoTen didn’t produce whomping bass, or low bass of any kind, but it did pump out enough upper bass to keep the beats going. The mid-frequencies had presence without distortion, and the upper frequencies were bright without being shrill. All in all, and taking into account its inevitable physical limitations, the DuoTen provided darn good listening for a $33 waterproof speaker about the size of the business end of a bathroom plunger. It played loud enough for most situations. I often left its volume level at the default “19,” and never went past “26.”

Steve March Tormé has followed in the steps of his late father, Mel Tormé, and become a fine jazz singer in his own right. The title track of his The Night I Fell for You (16-bit/44.1kHz ALAC, Frozen Rope) is an intricate, upbeat, often delicate arrangement for trio: Tormé, double bassist Jim De Julio, and drummer Donny Osborne. The bass line was surprisingly audible and surefooted, with Tormé’s voice and Osborne’s brushed snare tonally balanced. The bass was subtle, but loud enough that I could hear each pluck of string and the resulting tonal quality.

In “Blue Train,” from Johnny Cash’s All Aboard the Blue Train (16/44.1 ALAC, Sun/Varèse Sarabande), the bass and twanging banjo set up a punchy rhythm. This accompaniment sounded rock-steady through the DuoTen as Cash’s voice soared above it. Voices in general were intelligible without sounding thin. 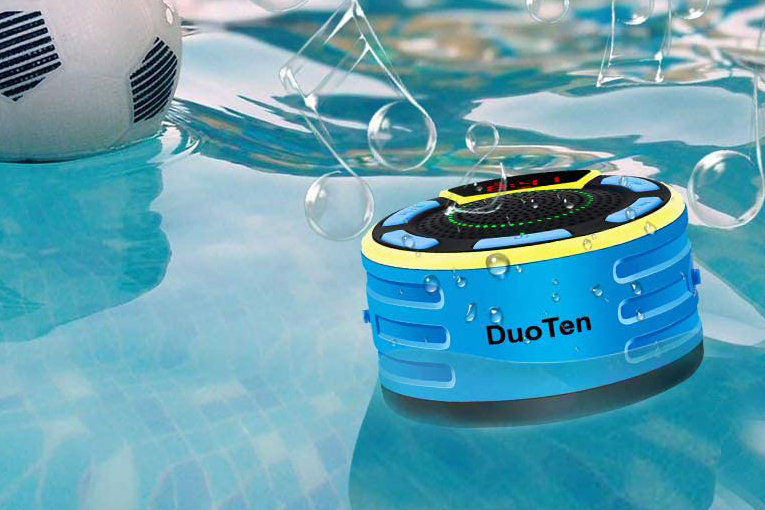 Brahms’s Symphony No.1 begins with a pounding timpani ostinato. The DuoTen made the recording by Eduard van Beinum conducting the Royal Concertgebouw Orchestra (16/44.1 ALAC, Philips) sound commanding. The violins, rising over this din, were sweet, with even a bit of “air” around them, and the upper bass line was surprisingly robust considering the lack of low bass. All told, a very satisfactory sound.

The DuoTen proved a sensational value for the dollar. It sounded good with all types of music, is exceptionally portable, and is just plain fun to use. Waterproof, dustproof, sturdily built -- and, with the purchase of a second unit, capable of true stereo sound -- it could add a bit of adventure to your daily shower, or to bike trips or hikes. Within the context of the obvious and unavoidable limitations due to its size, highly recommended.