It’s refreshing to see a speaker system that has a model name instead of a number. The Tuk ($799.99/pair USD) comes from the Canadian company Kanto Distribution Inc., and is named for Tuktoyaktuk, a remote village on the shores of the Arctic Ocean, where the aurora borealis is particularly spectacular. 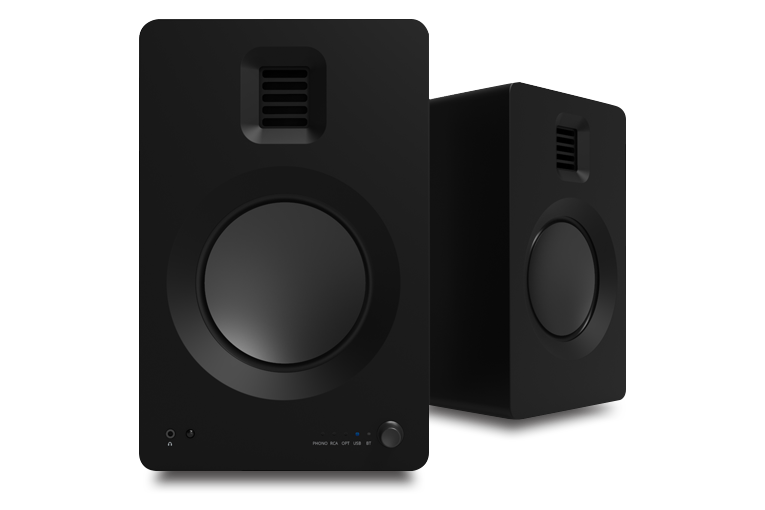 The default left-channel Tuk contains all electronics for the pair. Also included are grilles for both speakers, eight rubber bumper feet, a power cord, a 15’ speaker cable with banana plugs, a 6’ USB link, a 6’ stereo RCA-to-3.5mm interconnect, and a remote control with two AAA batteries. There’s also an instruction manual printed in easy-to-read type, with lots of diagrams.

The Tuks come in matte white with gray grilles, or my review samples’ matte black with black grilles. They’re rectangular, with rounded front corners. The grilles (packed separately) attach to the speakers magnetically. Each Tuk measures 10.9”H x 7”W x 8.5”D; the speaker containing the electronics weighs 11.1 pounds, the other one 9.9 pounds. The cabinets, made of MDF, had a lovely, smooth finish that didn’t attract much dust.

The front of each speaker has a 1” x 1.2” Air Motion Transformer (AMT) tweeter and 5.25” aluminum-cone woofer. At the bottom right of the front baffle of the speaker containing the electronics is a volume knob that doubles as an input selector. To its left are five LEDs that let you know which input is active, and that confirm other settings (including on and standby). A helpful feature is that you can save different manually set equalization settings for each input. In the bottom-left corner of the baffle is the 3.5mm jack for the Tuk’s dedicated headphone amplifier, and a remote IR sensor. 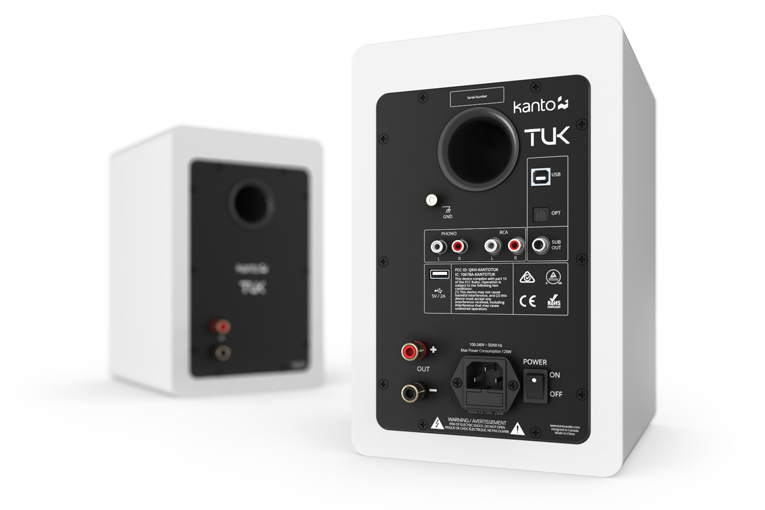 Near the top of each speaker’s rear panel is a round bass-reflex port, and on the electronics-laden speaker rear is much more: a ground post for a turntable, left- and right-channel phono inputs (RCA), L/R line inputs (RCA), a USB port, an optical digital input (TosLink), a USB charging port, a subwoofer output jack (RCA), output terminals to connect the other speaker, an IEC power inlet and fuse panel, and a master on/off rocker switch. The other speaker has only input terminals for the other speaker.

The ground post and subwoofer output jack were welcome surprises. The USB charging port is also useful -- you can charge a personal device while listening to music from it -- and the built-in phono preamp and USB DAC let you directly plug in a turntable or computer. The DAC has maximum resolution of 24-bit/96kHz, and the Tuk’s array of inputs let you connect just about any device, from turntable to Bluetooth.

On the remote control are all of the front-baffle controls plus a few more: buttons for Mute and Bluetooth Reset, rockers for treble and bass adjustment, and a Reset button to return those tone controls to Flat. For Bluetooth operation only, there are buttons for next and previous track, and play/pause. Another button lets you adjust the brightness of the control speaker’s LEDs, from bright to completely off. When you plug in a subwoofer and press the Sub button, a low-pass filter (LPF) for the sub and a high-pass filter (HPF) for the Tuks, both set to 80Hz, are engaged. The HPF should improve the Tuks’ upper bass and midrange detail when a sub is used. The remote’s commands can be programmed into Harmony universal remotes. 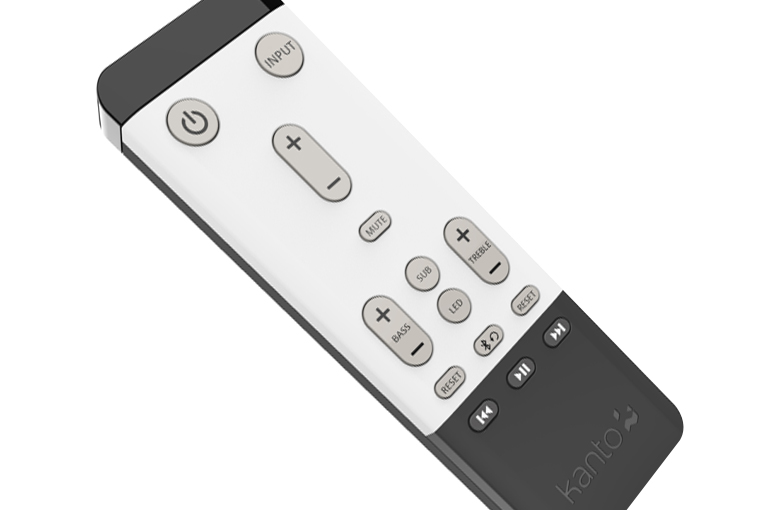 Some specifications from Kanto: The Tuk’s frequency range is 50Hz-20kHz, and its class-D amplifier delivers 130W total RMS, 260W peak. Bluetooth 4.2, with Qualcomm aptX HD and AAC codecs, is supported.

Setting up the Kanto Tuks was a snap. In the factory default setting, the speaker containing the electronics reproduces the left channel, the other speaker the right channel. However, these channel assignments can easily be reversed using the remote control, as I had to do -- my only available power outlet was to the right of the right-hand speaker.

All I had to do was plug the Tuks’ power cord into the back of the right speaker, then run the speaker cable from the right speaker to the left. All cords, cables, and interconnects are color-coded, so you’ll be sure to have the speakers correctly connected, and seem very sturdy. I turned on the master power rocker and was ready to go.

I used mainly the remote to control all of the Tuk’s actions. It worked smoothly, with no latency. 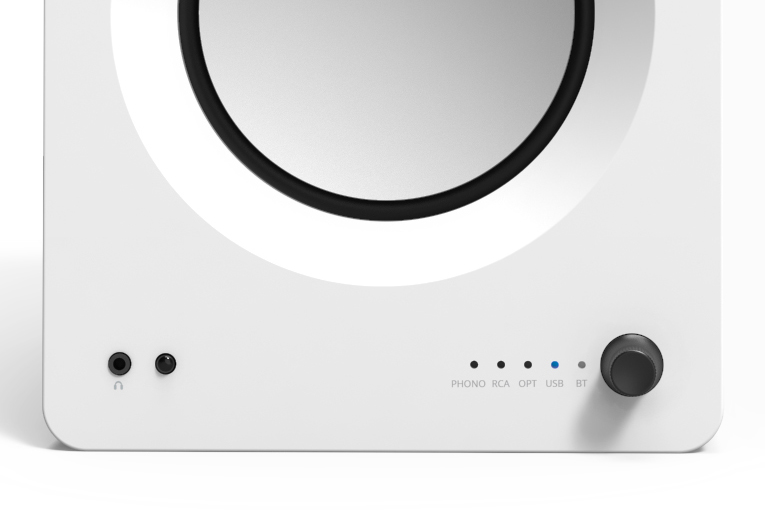 Kanto recommends placing the Tuks 8” from the wall behind them, but this I couldn’t do. Instead, I have a 5’ x 5’ table in front of my listening seat, and placed the Tuks on the far corners of that. Were I to install the speakers permanently, I’d probably put them on Kanto’s 32”-high speaker stands ($139/pair), so they could be farther from me and closer to the wall. Kanto says that while the Tuks can be laid on their sides, they don’t recommend this orientation; because of the design of the AMT tweeters, their treble dispersion would suffer.

The sound was spacious, transparent, exceptionally detailed, and tonally even from top to bottom. The highs were especially good -- bright and chipper, but never brittle. The bass was excellent, as focused as I could wish, though rolled off toward the very bottom of the audioband. No problem -- I plugged my Polk DSW Pro 550 powered sub into the Tuk’s subwoofer output, engaged the 80Hz crossover, and did some balancing of levels. The result was one of the nicest two-channel sounds I’ve had in my home.

The Tuks’ reproduction of soundstages amazed me: broad and deep, and never seeming to come directly from the speakers. Sounds seemed to come from points well outside the speakers’ boundaries. Impressive. 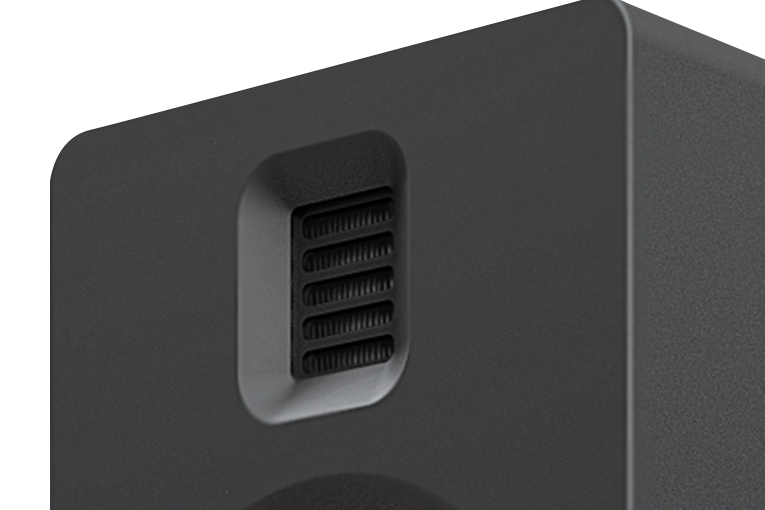 Despite my appreciation for the extra bass, I did most of my listening without the Polk sub, to get the true aural measure of the Tuks. I listened via Bluetooth from my portable devices and my computer. I did not have a turntable so could not assess the phono input. I started with Bluetooth, since that is how these will likely be used in the portable scenario in which this column is dedicated.

One of my favorite live albums by Ella Fitzgerald is Twelve Nights in Hollywood (16-bit/44.1kHz ALAC, Verve). Recorded at the Crescendo Club in 1961 and 1962, it contains a very bouncy, committed performance of George and Ira Gershwin’s “Nice Work If You Can Get It.” Paul “Scooby” Smith’s piano enters at right, joined by Stan Levey’s drum licks at left and Wilfred Middlebrooks’s double bass at center. Fitzgerald’s voice, too, is center stage, in front of the bass, and all four swing like there’s no tomorrow. The Tuks imaged them perfectly, presenting music that positively sizzled with “you are there” presence.

Turning to another favorite singer, I cued up Cole Porter’s “Too Darn Hot,” from Claire Martin’s Too Darn Hot! (24/96 AIFF, Linn). The first verse is just double bassist Geoff Gascoyne at center right, with various percussion instruments mixed from left to right, and Martin’s voice front and center. It’s a wonderfully hypnotic performance, and Martin’s languorous singing is quite sexy. What most impressed me was the Tuks’ reproduction of Gascoyne’s bass line, with every plink and plunk solid and well defined. You might have trouble believing -- I did -- that speakers so small were capable of such convincing bass, but the proof of a speaker is in the hearing. 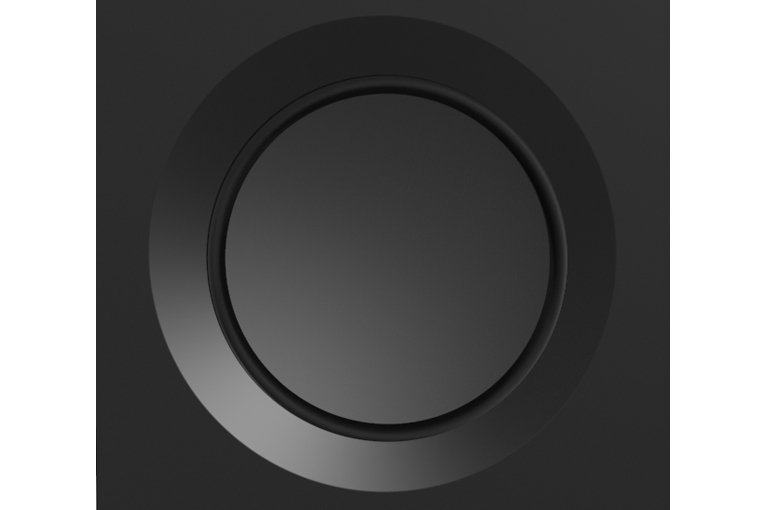 The Finale of Tchaikovsky’s Symphony No.2, “Little Russian,” has a grand, majestic opening, with blockish chords for full orchestra punctuated by fortissimo timpani. Conductor Riccardo Muti gets the Philharmonia Orchestra to perform this with great passion (16/44.1 ALAC, Warner Classics), with loud, measured timpani rolls. Through the Tuks, nothing was blurred -- I clearly heard each individual drumstroke. Tchaikovsky has been criticized for the plethora of cymbal crashes he scored for this work, but the Tuks reproduced each one with a shimmering delicacy that was never harsh.

I next further tested the Tuks by hooking up my computer to their USB input. I cued up a classic monaural recording: Erich Kleiber and the Concertgebouw Orchestra performing Beethoven’s Symphony No.6 (16/44.1 ALAC, Decca). This 1953 recording was one of Decca’s late Full Frequency Range Recordings (ffrr) tapes, before they began also making their Full Frequency Stereo Sound (ffss) releases. The jolly third movement is my favorite, and the Tuks made it a joyful experience. The upper strings were bright yet sweet, the bass was well focused, and the transparency was amazing. When the horns blast in, I could hear them very clearly, as well as the string filigree that often gets lost in a welter of sound, especially in mono. Decca’s engineers did an outstanding job, and the Tuks made their efforts absolutely crisp and clear. The wired digital connection was very slightly more transparent than the Bluetooth connection I’d been using. 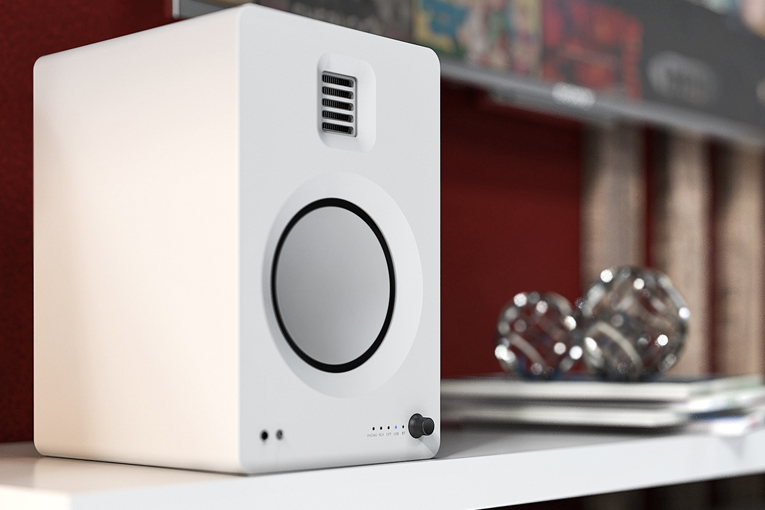 I was constantly amazed at the Tuks’ open, transparent, yet pinpoint and detailed sound with both Bluetooth and wired digital connections, and wondered how its headphone output would sound. In a word, wonderful. I used my Audio-Technica ATH-MSR7NC headphones, as I like their smoothness throughout the audioband. I listened to Ernest Ansermet and the Swiss Romande Orchestra’s recording of De Falla’s The Three-Cornered Hat (16/44.1 ALAC, Decca). This buoyant ballet opens with pounding timpani that lead to a brilliant brass fanfare, followed by raucous castanets interrupted by resounding handclaps and shouts. I know this recording well, from the first stereo LP to the CD editions of later decades, and what I heard through my headphones plugged into the Tuks was tonally neutral and uncongested, suggesting that Kanto’s headphone amp is powerful. Nor did I have to raise the volume much to hear further into the recording.

The Kanto Tuk is an impressive, versatile little two-speaker system that can stand on its own against much larger speakers, especially if you take advantage of its subwoofer output. It replaces a traditional DAC, phono stage, preamplifier, and power amplifier by including all of them, built into one of its very small cabinets, and Bluetooth connectivity only increases its versatility.

Most important, the Tuks sounded great, with good presence, and the ability to convincingly reproduce any sort of music. And they’re extremely user-friendly. If you’re looking for a two-channel system but don’t want to be bothered with bulky separates, you can hardly go wrong with the Kanto Tuks.