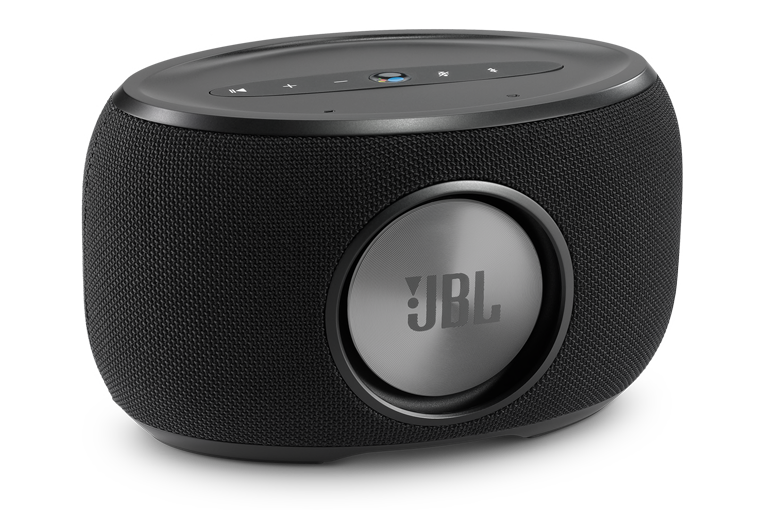 Although the Link 300 has a few flaws, it’s a nifty little speaker whose appeal is muted only by a high list price that puts it out of the ballpark for many buyers. But good news: You can find it and most of these models online for much less -- even on JBL’s own website, where the Link 300 is currently sold for $124.95: half its list price.

The Link 300 comes nestled in a plastic form in JBL’s usual mostly orange box with carrying handle. A little box of black cardboard holds the accessories: a power umbilical (a 19V adapter and cord), and one of the skinniest quick-start manuals I’ve ever seen (and hope never to see again). That’s it. There are no audio or USB charging cords -- except for the power cord, the Link 300 is meant to be used solely for Wi-Fi and Bluetooth transmission. Nor is there the usual 3.5mm jack for connecting devices that lack Wi-Fi or Bluetooth.

The Link 300, available in black or white, has an oval cross section; from the front, its profile is that of a rounded-off rectangle. Though I didn’t find its looks all that attractive, it did blend in just about everywhere -- which perhaps is the intention of its nondescript appearance. It measures 9.3”W x 5.3”H x 6.1”H and weighs 3.75 pounds. Its top and bottom are made of the usual hard, rubberized plastic -- it won’t bounce around while playing -- as is the wraparound, fine-meshed grille. The controls, all on the top panel, include buttons for Volume up/down, Play/Pause, Bluetooth, Microphone Mute, and Google Assistant -- press the last when you tire of saying “Hey Google.” Also on the top are two farfield microphones. On the bottom panel is a jack for the power adapter, a Micro-USB port (for servicing only), and a reset button. 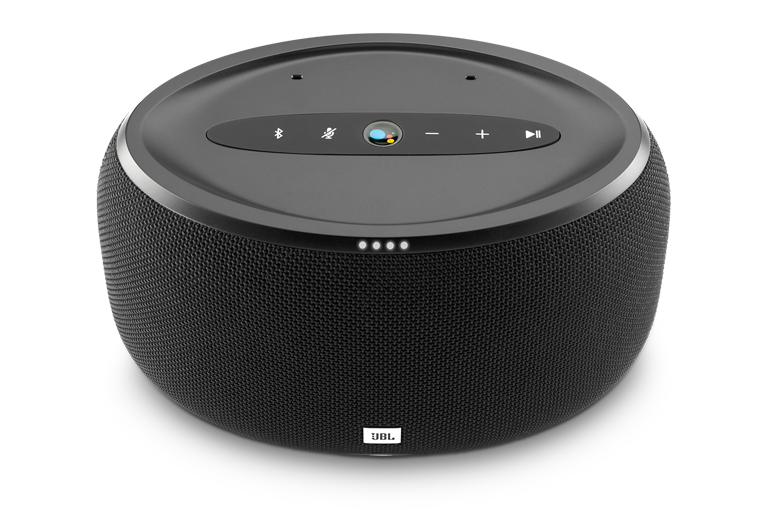 In a little row centered on the top front edge of the Link 300 are four LEDs. These indicate that Google has received your message and is working on it, as well as the relative volume level. Just below the JBL logo at the bottom front center is an LED that indicates the strength of the Wi-Fi signal. The top lights go dark after you set up your activity, but the Wi-Fi light irritatingly stays on, and in the Google app I found no way to defeat it. I covered it with a piece of black electrical tape.

Behind the front grille are the two drivers: a 0.8” tweeter and a 3.5” woofer; in back, behind another JBL logo, is a mighty 3.2” version of JBL’s familiar passive radiator.

Setting up the Link 300 was relatively simple: Using the supplied cords, plug the power adapter into an AC power outlet. Download the Google Home app to your smartphone, and follow the instructions to add a device. A caveat: Though app and speaker will work together for basic functions on older operating systems, you must have a more recent model of phone to access all of its features, such as Home Control and linking to other devices on your Wi-Fi network.

The farfield mikes worked very well. When there was little background noise, I didn’t have to shout at the Link 300 to get Google Assistant to function -- but if the volume on the TV or stereo was too loud, I did. It’s nice that Google Assistant offers choices of voice response: different accents of male and female voices. 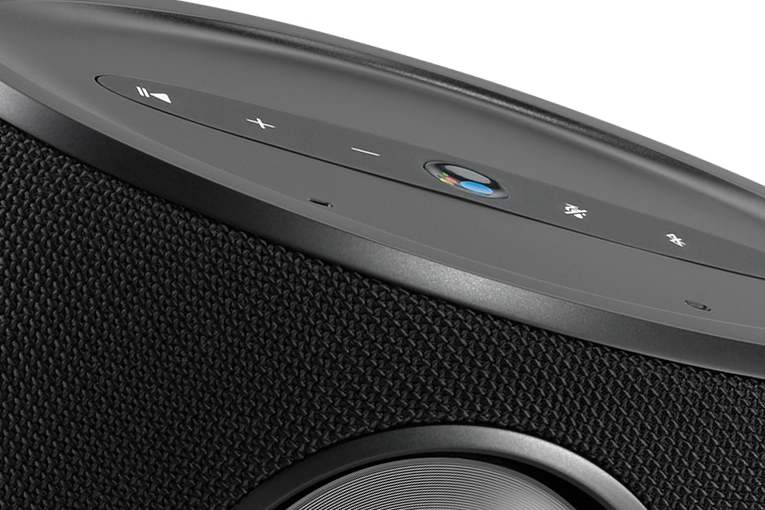 It was fun to ask the Link 300 about state capitals, the weather, news, and recipes. If you think voice-activated A/V is a kick only for those with a lot of time on their hands, you might be pleasantly surprised to discover how often you end up using it. As time went on, I found it quite useful. Using voice commands, for example, I could pause play and call up a specific music title or genre. Onboard music services included Google Play Music, Pandora, Spotify, and YouTube Music. Amazon Prime Music is absent, but can be hooked up via Bluetooth.

You’re supposed to be able to connect other devices to the same Wi-Fi network as the Link 300 and control them with voice commands through the Link 300. The list of supposedly compatible devices is very long, but the only one I had on hand was a Logitech Harmony Remote Hub, and it was something of a nightmare to get going. I finally did, mostly with the help of the Logitech support crew. I could say, “Hey Google, play Blu-ray 1,” and it would correctly go through all the steps to do that. But then the Link 300 would intrusively announce that there’d been a glitch -- even when there hadn’t been. I spent hours trying to solve this problem, but still hadn’t by press time.

The Link 300’s warm, detailed sound was very much in line with JBL’s signature sound. The bass was boosted, but still emerged with some focus. The highs, too, were emphasized, but not to the point of sounding wholly unnatural. The midrange had good presence and definition. The Link 300 played very loud with no noticeable distortion -- it should be able to fill a medium-size room with sound.

The Link 300 includes Chromecast Built-in -- depending on your device and your music service, it can play files of resolutions up to 24-bit/96kHz. This will give you much better sound than in Bluetooth mode, though even that is better than usual. 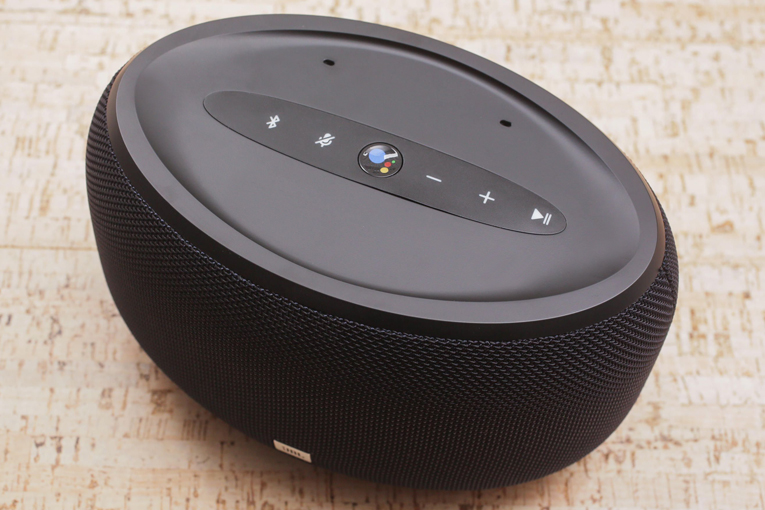 Surprisingly, the Link 300 was quite good with classical music. Stored on my little Benjie player in CD quality are J.S. Bach’s complete works for organ, performed by Peter Hurford (16-bit/44.1kHz ALAC, Argo). The rich sounds of the various organs used in the series were remarkably good: crisp and clean for the upper pipes, solid and sure for the lower. The Link 300 is monaural; nonetheless, I was impressed with its transparency in reproducing these recordings.

Antonio Vivaldi wrote dozens of violin concertos, most of them as parts of larger collections, and one of the most famous of these groupings is L’Estro Armonico. In the recording with Sir Neville Marriner conducting the Academy of St Martin-in-the-Fields (16/44.1 ALAC, Argo), the first concerto has the usual sprightly violin lines, but also contains some cello filigree that’s almost rambunctious. The latter is often buried through portable speakers, but with the Link 300 it came across with clarity and force. The contrabass line, too, was prominent and solid as a rock. 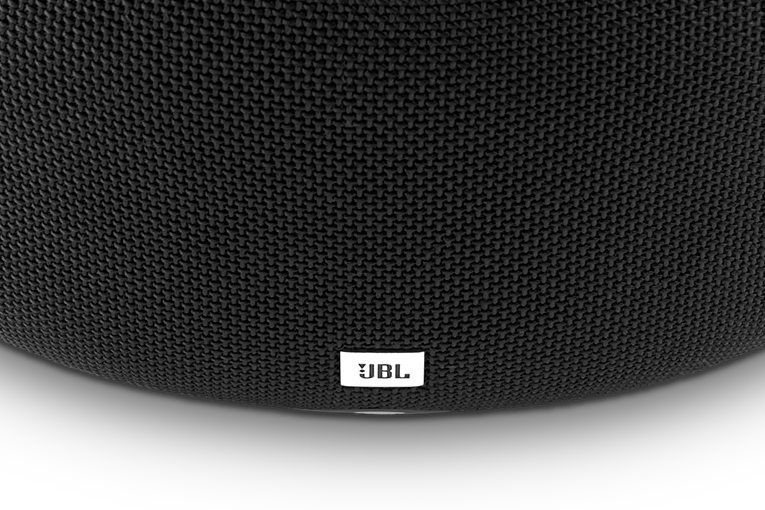 With the Link 300’s considerable bass output, it made a strong impression when reproducing rock and jazz. Just about any album by any artist you could name -- Queen, the Beatles, Duran Duran, Duke Ellington, and on and on -- sounded really solid in the bass, and got that rear passive radiator thrusting in and out dramatically. You’ll be tempted to put your fingertip on the grille just to feel the bass.

Though I found it difficult to, er, link the Link 300 with other devices on a Wi-Fi network, once it was properly set up it was quite effective. It took voice commands without my having to shout, and has Chromecast Built-in as well as Bluetooth. It produced better sound than the smaller voice-actuated speakers I’ve heard and generated enough volume to fill my room. I couldn’t unqualifiedly recommend it at its list price of $249.95 -- but for the $124.95 you can now buy it for, it’s worth a look and a listen, especially for bass lovers.