After reviewing the mammoth EcoBoulder speaker from Grace Digital last month, I was a little reluctant to return to the smaller, bass-shy Bluetooth models that are the norm. Strolling Walmart, I spotted G-Project’s G-Boom, which has been around a while and gotten a few top ratings. Another incentive was that I’d covered G-Project’s G-Go waterproof speaker four years ago and found it rather good. I took the plunge. 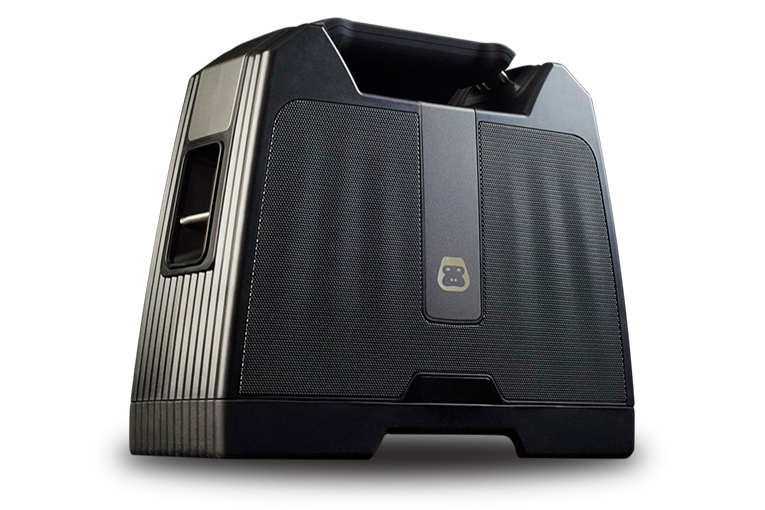 The cardboard box has no plastic window, so you can’t see the G-Boom itself ($100 USD), but there are lots of photos and hype to give you an idea of what it’s all about. The box has a well-thought-out carrying handle and, inside, two inserts of egg-carton cardboard securely hold the speaker, its proprietary charging cord, and several booklets: an intelligently written quick-start guide, and information about the one-year limited warranty and obtaining free stickers boasting the G-Project logo. (It’s sort of a cross between a dinosaur face and a skull.)

The main ideas behind the G-Boom are simplicity and extended bass -- there are few controls, bells, or whistles. You get just the basics -- a welcome relief to those turned off by overcomplicated control arrays. 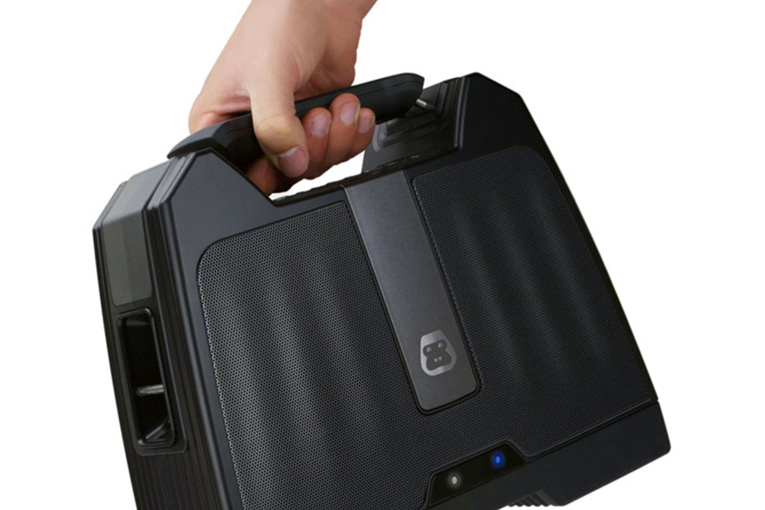 The speaker is a black-and-gray plastic trapezoid measuring 11.8”W x 10.2”H x 4.9”D. The prominent handle fit my hand perfectly, and at five pounds, carrying it requires little effort. The front is covered with a grille, behind which are the two 3” midrange-bass drivers and two 1” dome tweeters. Near the bottom are three LEDs that tell you the status of the rechargeable battery. If everything’s charged, the white power LED and the blue LED glow steadily. When you begin to run out of battery time, the white power light continues to glow, but the red charging LED begins to blink.

On the rear panel are two bass ports, in a configuration that reminds me of G-Project’s face logo. Below these is the “mouth” -- a compartment, covered by a rubber flap, containing the charging jack and a 3.5mm jack for connecting non-Bluetooth devices.

The G-Boom’s slanted sides have indentations with metal bars that provide sturdy hooks for a shoulder strap. The bottom surface is a heavy rubberized material that ensures that the G-Boom will be solidly secured to any surface it’s placed on.

On the top, in a neat row under the handle, are all the controls. From left to right: power on/off, Bluetooth pairing, EQ (Flat, Rock, Pop), previous track, play/pause, next track, and volume down/up. 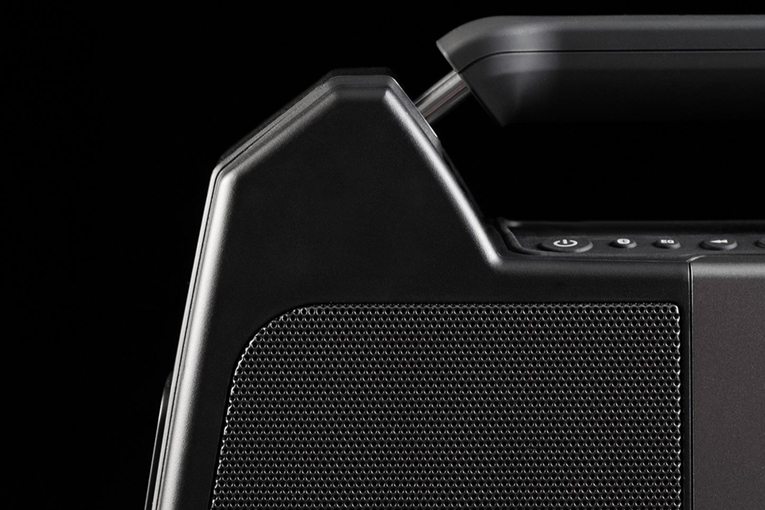 The charging cord is a little over 6’ long, and it’s not the USB cord included with most Bluetooth speakers. At one end is a transformer and AC plug, at the other a round connector of the sort often found with computer accessories.

The build quality is quite solid -- the G-Boom felt and looked exceptionally sturdy. G-Project claims a battery life of seven hours, which my experience confirms.

The guiding design principle for the G-Boom seems to have been simplicity. The speaker paired very quickly with my Bluetooth devices, and then it was simply a matter of carrying it around to various spots, finding an album on my device, and pressing Play. The range of operation seemed a bit less than with some other Bluetooth speakers, and objects obstructing the signal path caused a bit more stutter than usual. All of the controls worked correctly, and I was pleased that the power LED confirmed each change of volume level. And I loved the way the G-Boom was designed to be carried. 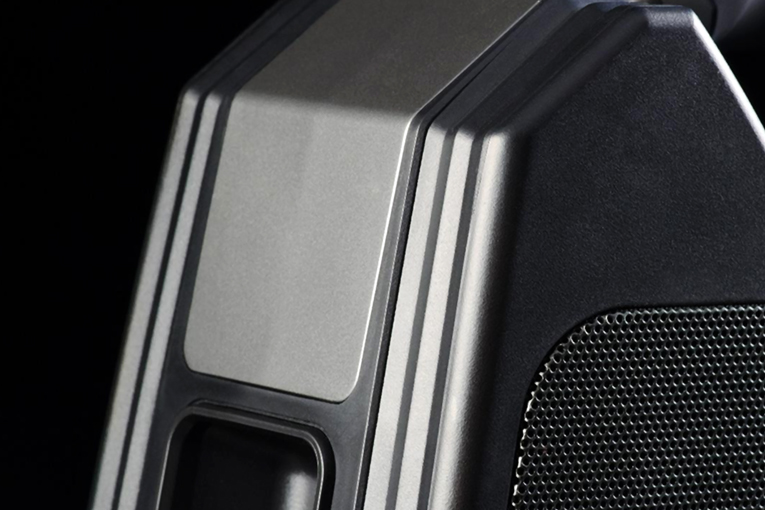 Because Grace Digital’s EcoBoulder has set a new standard for how loudly a Bluetooth speaker can play, we have to go back to the pre-EcoBoulder standard to judge loudness capability for speakers of medium to small size. By that standard, the G-Boom played very loudly for its size, rocking along at above-average volume. Stereo soundstages were somewhat limited by the proximity of the drivers to each other, but depending on the recording, the G-Boom could provide some satisfying stereo effects.

The G-Boom’s sound was smooth overall, with mildly aggressive bass, a midrange with a lot of presence, and far smoother, more transparent highs than I’d anticipated. I’d expected this speaker to do well with rock and jazz, and it didn’t disappoint. Albums by the Beatles, John Mellencamp, Duran Duran, Dave Brubeck, and many others sounded energetic, with pumping bass and smooth highs. Midrange vocals had commanding presence, and each performer’s individual tics came through with almost startling clarity.

I was surprised by how well the G-Boom reproduced classical music. One of my favorite reference recordings is of Vaughan Williams’s A Sea Symphony, with Sir Adrian Boult conducting the London Philharmonic Choir and Orchestra, and vocal soloists Sheila Armstrong and John Carol Case (16-bit/44.1kHz ALAC, EMI). I was amazed at the G-Boom’s transparency in the passages for full chorus and orchestra, a transparency that didn’t take away from the full impact of the loudest passages. And I could hear into the recording with very little distortion.

Wagner’s overture to Die Meistersinger von Nürnberg, with Antál Dorati conducting the London Symphony Orchestra (16/44.1 ALAC, Mercury Living Presence), had that same solidity and transparency, the brass ringing out with surprising authority. So did Emil Gilels’s piano in his recording of Tchaikovsky’s Piano Concerto No.1, with Fritz Reiner and the Chicago Symphony (16/44.1 ALAC, RCA Living Stereo). I was also impressed by the natural sound of the piano, and cues that clearly put the solo instrument at the conductor’s left hand. This is my all-time favorite recording of this popular work, and I didn’t feel at all cheated as I listened to it through the G-Boom.

G-Project may have designed the G-Boom to be a modern version of the boom box, but it turned out to be quite good at reproducing classical music -- a pleasant surprise. If you’re looking for a simple-to-operate speaker that you can easily carry from place to place, it might be the ticket. I think the list price of $100 is a bit high, but you can find it at Walmart and other discount stores for at least $20 less -- and if you do, that’s good value for the dollar for a very serviceable, plain-Jane speaker of merit. I’m glad I finally got to hear it!