Koss, one of the oldest manufacturers of hi-fi gear in the US, was founded in 1958 by John Koss. He believed that headphones could be used for something more than voice messages and monitoring on aircraft and ships, and premiered full-range stereo headphones to great success. Old-timers need no prodding to remember the company, and newcomers who’ve watched Mad Men might relate -- Koss is one of the real companies that Don Draper’s fictitious advertising agency works for. Many of the Koss models created decades ago are still being made.

With an eye to the future, Koss has now brought out the BT540i wireless Bluetooth headphones ($199.99 USD). 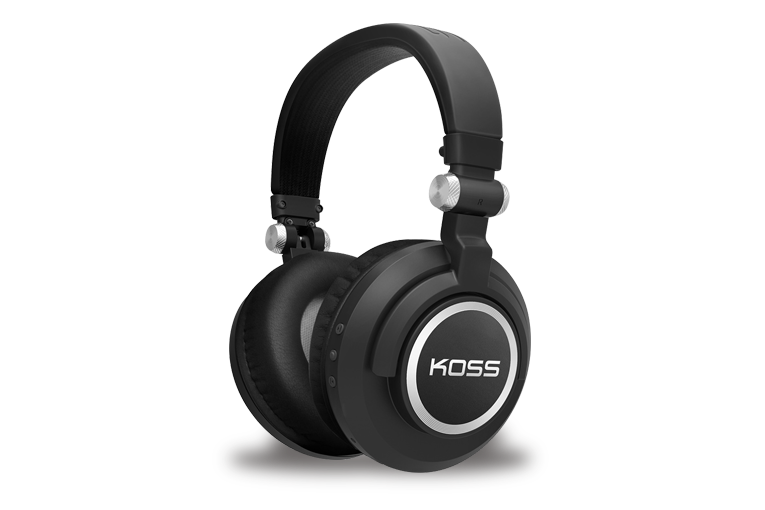 I don’t like unpacking equipment that sends me on an Easter-egg hunt for cables, adapters, and the like, each in its own separate little package. Koss solves this by providing a hard, durable carrying case that holds the BT540i headphones and all their accessories. The case is slimline -- the headphones fold flat -- and a zippered compartment inside it holds everything else needed: a USB-to-USB Mini charging cable, a 3.5mm-to-3.5mm backup cable (the BT540is can be used wireless or wired), a brief startup guide, and warranty information.

The sleek and simple Kosses are offered only in black, with brushed-aluminum trim. The arms can be extended, and have detents. Not only do the earcups swivel to flat position, they’re hinged to fold up even smaller -- good for those times when you want to toss them in a gym bag and not bother with the case. The rigid case is very protective, but the headphones themselves have a sturdy build that feels solid and sure. 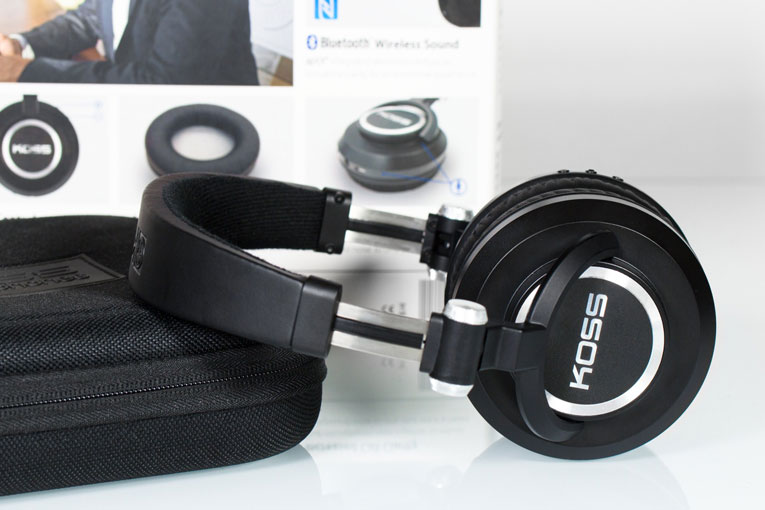 The BT540is seem made mostly of plastic, with aluminum hinges and headband. The earpads are of foam covered in high-quality “leatherette” (plastic), and the headband’s foam padding is covered with cloth. The Koss logo is stamped across the top of the black headband, and appears in raised aluminum letters on each earcup.

The action is all on the right earcup: Along its rear edge are three pushbuttons that govern Play, Pause, and search Forward and Back. At the bottom of the earcup is a jack to plug in the USB cord for charging, another for connecting the wired cable, and an On/Off/Pairing switch with LED. Flip the switch to the right to turn off the headphones, left to turn them on, and push it hard left to start Bluetooth pairing. The LED glows red for Off, blinks red and blue during pairing, then blue when the BT540is are paired to a Bluetooth device, after which it blinks twice every two or three seconds. You won’t notice this, but it might bug the heck out of someone behind you. The same LED glows red while the battery is charging, blue when charging is finished.

These controls work only when the Kosses are used wirelessly. There are also Volume Up and Down buttons, at about one and two o’clock, away from the other buttons so you won’t confuse them.

The BT540is benefit from having Koss’s new PLX Elements driver, and uses the aptX Bluetooth protocol for better sound. 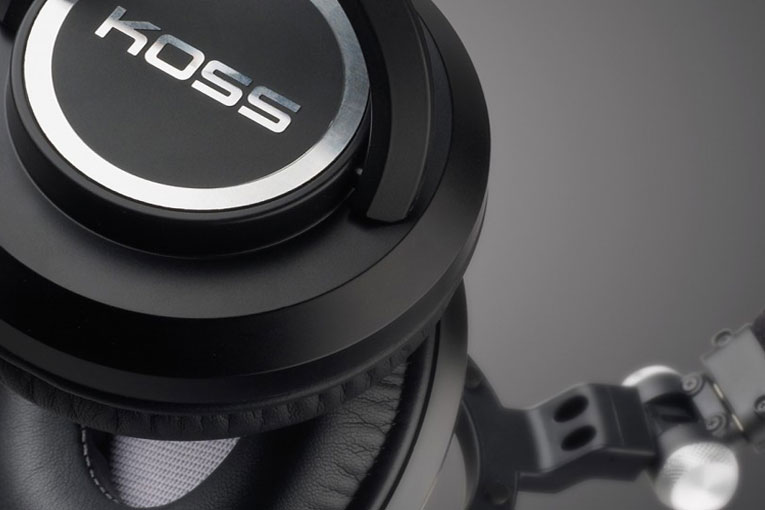 The Kosses’ frequency range is a claimed 10Hz-25kHz, with an impedance of 38 ohms and a sensitivity of 100dB SPL. They weigh 8.3 ounces and, folded flat, measure 7.2” x 7.25” x 2”. Swiveling the earcups into playing position increases the depth to 3.5”, the diameter of the earcup. The ear opening is about 2” in diameter and, alas, round. For some reason, for this model Koss has chosen not to use its successful D-Profile, oval earcups.

There’s a one-year limited warranty -- a far cry from Koss’s usual lifetime arrangement, but necessary, I suppose -- the battery and other electric elements are liable to wear out more quickly than the headphones themselves.

The BT540is fit me very well -- they stayed on during any sort of physical activity, from walking to crunches at the gym. Nor did they get uncomfortably hot, though I found it odd that they felt warmer when I listened at home than during physical exercise. Though the Kosses fit over my largish ears relatively well, I missed the oval earcup design of many of their wired models, which fit my ears perfectly. Being closed-back, over-the-ear headphones, they provided quite a bit of passive noise reduction -- I had to take them off to have a conversation with someone. Otherwise, it was like talking underwater.

Pairing was very easy with the Sony dongle I use with my iPod Nano and iPod Touch, but was somewhat tricky with the new Astell&Kern AK Jr. I attribute that quirkiness to the A&K, not the headphones. Connectivity was very good close up, with a device on my body, but I could get a reliable connection only up to about 15’ away (though this was with walls between headphones and source). 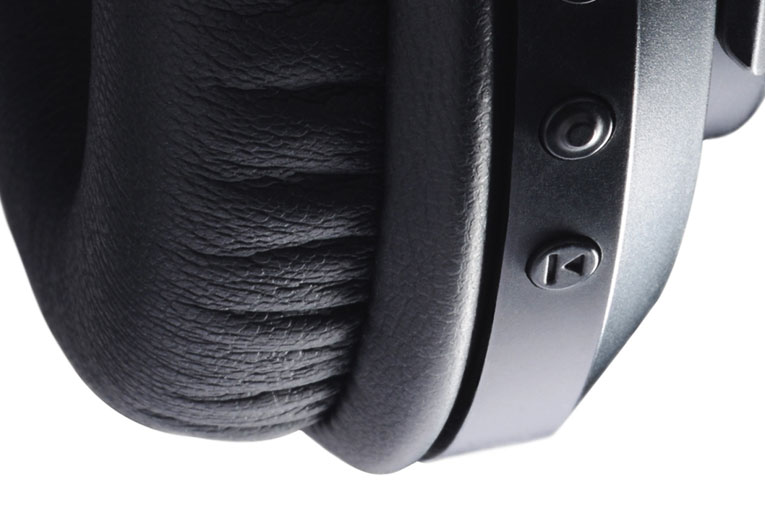 The positions of the controls have to be learned. I positioned my hand with my thumb on the cluster of Play/Pause and Forward/Back controls, and my second and third fingers on the volume buttons. This took a little getting used to, but after a week my fingers fell automatically into the right positions. The controls all seemed to function properly, although I could never go back more than one track, no matter how many times I pushed the Back button.

According to Koss, these ’phones will play for eight hours on a full battery charge. I got about seven hours, but I played music very loud. No doubt a full charge will last a bit longer with lower volumes. Seven or eight hours is far less than is offered by some comparable headphones, but it was enough for everyday use. Moreover, the BT540is charged up very quickly -- and you can always power them via a wired connection.

The BT540is’ sound had lots of presence, and was well balanced tonally from top to bottom. The highs were crisp without being aggressive, the midrange was solid, and the bass was punchy without boom. The overall sound was fairly neutral -- the quality of sound I heard depended in no small part on which recording I played.

Soundstages were quite wide. With pop music there was some Ping-Pong effect, but considering the sources, I liked that. With classical music, the wide separation made the sound more transparent; I was able to hear many details that were obscured when I listened to the same tracks through speakers. 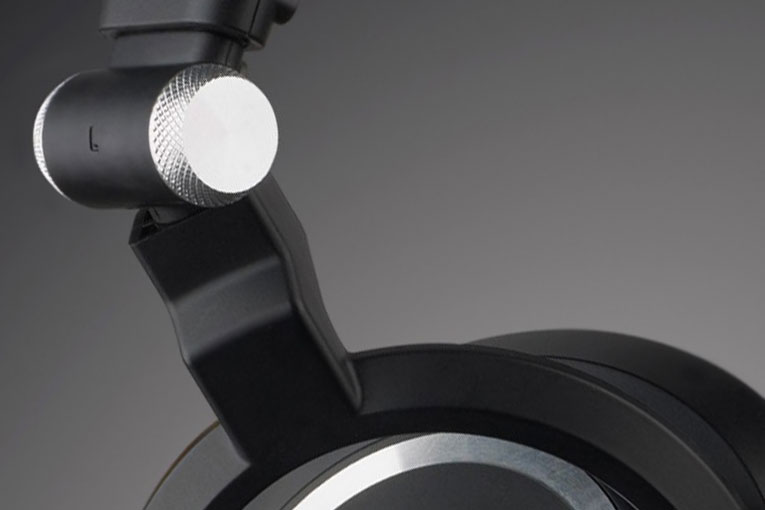 With the latest versions of Bluetooth transmission, there was little difference between the sounds of wireless and wired operation. In fact, the wireless mode produced a benefit: lower distortion. With their volume-limiting feature, I couldn’t drive the BT540is into distortion in Bluetooth mode. Wired, I could easily get the volume high enough to produce midrange distortion, especially in the left channel. But these headphones played loud enough in wireless mode to please all but those who deliberately court deafness.

I was particularly interested in the Kosses’ reproduction of deep bass. Glee: The Music, Volume 3 -- Showstoppers (16-bit/44.1kHz ALAC, Columbia) includes an intense version of “I Dreamed a Dream,” from Les Misérables. At “Let the tigers . . . ,” there’s suddenly a synthesizer way down in the low bass. Through most headphones I hear its entrance, or a suggestion of it, after which it fades into the orchestral sound. Through the BT540is I felt as much as heard that entrance, and in the ensuing passage the bass line was entirely audible and well defined. In fact, one of the most wonderful things about these headphones was their reproduction of focused bass. Check out just about any song on Vampire Weekend’s first, self-titled album (16/44.1 ALAC, XL Recordings) and you’ll easily hear what I’m talking about. That album will also let you hear rich midrange vocals and crisp percussion.

For something symphonic, I turned to “Imperial March,” from John Williams’s score for Star Wars, as recorded by Erich Kunzel and the Cincinnati Pops on their Great Film Fantasies (16/44.1 ALAC, Telarc). The orchestra sounded a bit less focused than I would have liked, but the bass-drum thuds were solid as rocks. 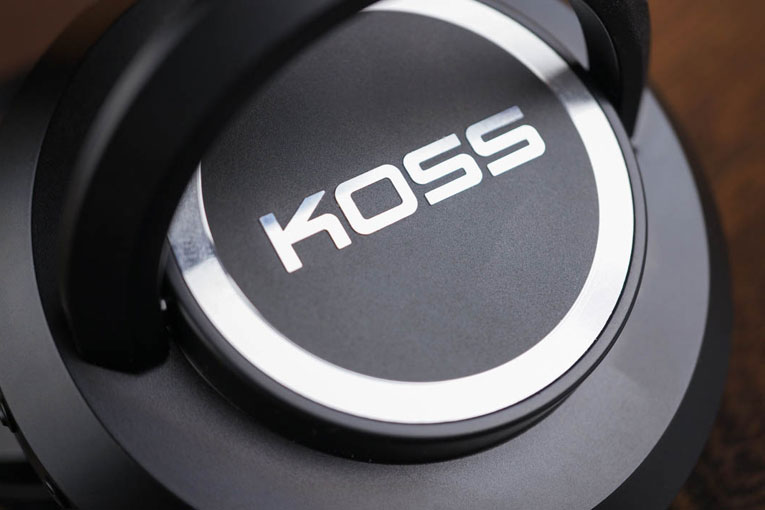 I tried out some high-resolution recordings on the newly arrived AK Jr digital player, whose superior DAC also let me sample some favorite “Red Book” tracks with heightened fidelity. The sultry voice of Carmen Gomes smoldered in “Come On in My Kitchen,” from Carmen Gomes Inc.’s Torn -- intimate vocal jazz at its best (24/96 FLAC, Sound Liaison). Gomes performs with a small jazz ensemble: guitar, double bass, drums. The delicate vocal and instrumental detail in this recording was perfectly realized by the BT540is.

The full grandeur of the first movement of Vaughan Williams’s A Sea Symphony, with Sir Adrian Boult conducting the London Philharmonic Orchestra and Chorus (16/44.1 ALAC, EMI), with organ doubling the bass line, was overwhelming in its weight and its intricate and delicate detail. The extremely wide and transparent soundstage produced by the Kosses almost made me forget I was listening through headphones.

Koss’s BT540is are great over-the-ear headphones for physical activity and for listening at home. One of a growing number of headphone models designed to suit all purposes, they have especially good, nonboomy bass, but their sound is solid from top to bottom. I wish they had the large, oval earcups of Koss’s new wired model, the Pro4S. If you don’t mind wires, check those out -- they cost 50 bucks less and carry a lifetime warranty. But if wireless operation is a must, the BT540is will completely satisfy most listeners.