Bluetooth speakers continue to arrive in every shape and size. JBL’s Clip looks like a slightly oversized hockey puck, with a carabiner at the top that gives it its name. If you need something this small and don’t need a lot of bass, the little Clip’s performance might surprise you.

The JBL Clip ($49.95 USD) comes in black, gray, light blue, purple, or a red that looks more like orange. It’s accompanied by a very short USB-to-USB-Micro charging cord, a safety sheet, and a quick-start guide. Its single 1.56” (40mm) driver has a claimed frequency response of 180Hz-20kHz. 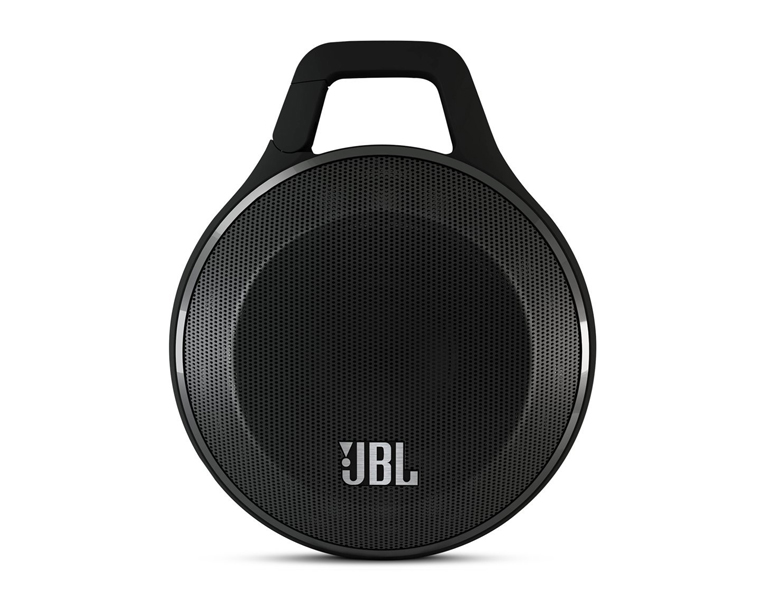 The Clip is 1.6” thick and 3.5” in diameter (to which the clip adds 3/4”), and weighs a mere 5.6 ounces. Despite its lightness, the Clip feels solid as a rock, and fits comfortably in the palm. Like most Bluetooth speakers, it’s made of plastic coated with a rubber-like material. The clip allows you to hang it from a belt loop, hook, backpack, or what have you.

The front is sturdy, with a fine-mesh grille and a prominent JBL logo. The back has only a 10”-long cord terminated in a 3.5mm plug, for use with non-Bluetooth devices. This cord snaps into a channel molded into the Clip’s circumference, where it fits snugly. It’s good to have built-in storage for it, but the cord is hardwired to the Clip -- if it breaks off, you won’t be able to replace it easily.

All of the Clip’s connections and controls are found along its circumference. Taking the carabiner as the Clip’s top, the USB Micro port is at the bottom. Along the right edge are the volume up and down buttons and a jack for a second 3.5mm cable, to daisy-chain two Clips (though the sound would still be mono). Along the left edge are buttons for Bluetooth pairing, on/off, and to receive telephone calls, if you’re set up that way. These “buttons,” identified with icons, are actually pressure points under the Clip’s surface.

The Clip was very easy to set up. Turn it on, and a blue LED behind its grille lights up. Push the Pairing button and the LED blinks. Enable Bluetooth on your source device, and it and the Clip will quickly pair. That’s the first time; ensuing pairing times with the same device are faster. You then adjust the volume, either on your source device or on the Clip. You’re ready to go. 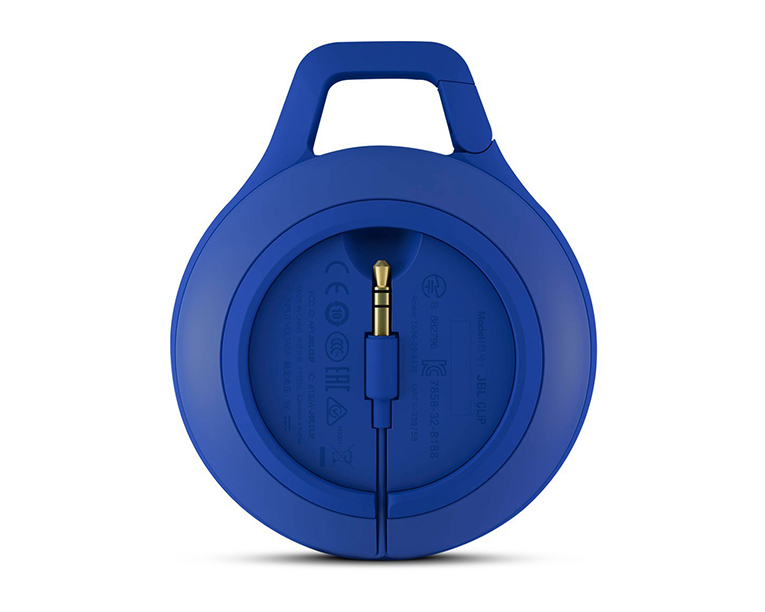 I found the Clip’s range of wireless operation to be about normal for a Bluetooth device in my house: 20’ to 30’. A battery charge lasted almost five hours, as advertised. (The LED behind the grille turns red when the battery is low.) In an unusual touch, an icon popped up on my iPod Touch. When I tapped it, it gave me the choice of hearing sound from the iPod Touch or from the Clip.

I don’t wear clothes that are easy to clip things to, though I did manage to fit the Clip into a hip pocket of my jeans. But unless you need two hands, the Clip is easy to carry around. Hooking it to a backpack would be perfect. I was amazed that a basically disc-shaped device will actually stand steadily on its edge. And unlike some small Bluetooth speakers that “walk” when fed bass-heavy music, the Clip remained upright, steady as a rock.

The JBL Clip played quite loudly for its size, with little distortion at its maximum volume level, and reducing the level one notch got rid of even that. And the sound was still moderately loud.

The Clip’s sound favored the midrange, so voices generally sounded quite good. Highs were a little harsh at full volume, a bit reticent at more restrained levels -- but this depended on the recording. The percussion in the third movement of Gershwin’s Piano Concerto, with pianist Earl Wild and Arthur Fiedler leading the Boston Pops (16-bit/44.1kHz ALAC, RCA Living Stereo), sounded quite good -- but the highs in Jackson Browne’s “Fountain of Sorrow,” as sung by Joan Baez on her Diamonds & Rust (16/44.1 ALAC, A&M), seemed a bit smooshed.

Bass? Well, this is a very small speaker, and I was pleasantly surprised that it could even suggest bass as well as it did with “Keepin’ the Road Hot,” from the Nitty Gritty Dirt Band’s Hold On (16/44.1 ALAC, Warner Bros.). The highs in this track sounded clear and fairly detailed, as did the voices.

The JBL Clip could never be considered a main speaker, and was never intended to be. But if you need something quick, easy, and lightweight for background music, the Clip can provide decent sound for those purposes, so long as you keep the volume within reasonable limits. It’s solid as a brick, and could probably survive a lot of abuse; I dropped it a few times on a carpeted surface, and its rubberized case seemed to absorb the shock quite well. For its size and price, it’s mission accomplished for JBL.