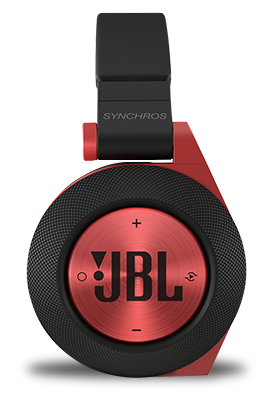 JBL is a name I heard a lot in college and my early years in Washington, DC, but until recently I hadn’t heard any of the company’s current products. My experience with the Synchros E50BT over-ear Bluetooth headphones ($149.95 USD) indicates that I should tune back in.

Inside the box, the Synchros E50BT headphones nestle in a black plastic cradle. In a compartment affixed to the inner side of the box lid are two cables: an audio cable with a straight 2.5mm plug on one end and a right-angled 3.5mm plug on the other, for use when the battery runs down; and a 2.5mm-to-USB cable for charging the battery. Also included are a quick-start guide, and warranty and safety information.

The E50BTs are made mostly of plastic, with a little metal, and their looks are impressive: futuristic with a retro accent. There’s a huge JBL logo on each earcup, and another on the leatherette-covered headband. The button behind the logo comes in different colors: black with silver, blue, red, purple metallic, and white with silver accents.

A unique swivel connection permits movement on two axes, allowing the earcups’ positions to be easily adjusted, from front to back and from side to side, to fit almost any head. This and the headband’s flexibility allow the cups to be folded for packing, and continuously adjustable sliders let the earcups be positioned for a secure fit. No carrying pouch is included, but I’ve found that Walmart’s camera department always has a case that will fit, at minimum cost. The earpads -- foam covered with leatherette -- are of generous size. The actual space for each ear is slightly oval, its diameters measuring 1.875” by 1.75”; each overall earcup is 3.5” in diameter. The E50BTs weigh 10.2 ounces and, despite all the plastic, feel solidly built.

One of the streamlined features of the E50BTs is their apparent lack of controls. All of the action is on the outer surface of the left earcup: At the bottom is a single 2.5mm input jack for charging and audio -- note that this is not the usual 3.5mm input jack; you’ll have to use the cable JBL supplies. A little to the left and at the corner of the rim is a single button for on/off and Bluetooth pairing.

The other controls are at various points around the circumference of the metal disc covering the left earcup. At 12 o’clock is volume up (“+”), and at 6 o’clock is volume down (“-”). At 9 o’clock is a little circle; pressing this gives you control of several functions: press once to pause, twice to skip forward a track, three times to go back a track. This button also aids in taking phone calls, though my phone is not set up for that function. Press the button at 3 o’clock to enact the multi-user function. I couldn’t try this either, because it requires a second set of JBL Bluetooth headphones. Basically, if you and a friend both have JBL headphones with this feature, you can listen together from the same Bluetooth source.

JBL lists the E50BTs’ frequency response as 20Hz-22kHz, their impedance as 32 ohms, and their drivers as 50mm in diameter, with what JBL calls PureBass Performance. They claim that a full battery charge lasts a whopping 18 hours.

To get a comfortable, sealed fit with my ears, I had to fully extend the Synchros E50BTs’ earcup sliders. Though not a noise-canceling design, the JBLs fit so well that they dramatically reduced external noise. And the fit was absolutely secure -- I could bend my head in almost any direction, and the ’phones went with me without falling off or even loosening. This might not be everyone’s experience, but the plastic-covered headband did seem to reduce slippage, assuming I got a tight fit to begin with.

The range was the best of any Bluetooth headphone I’ve tested -- I could roam anywhere in my home and stay solidly connected. It was easy to pair the E50BTs with my iPod Touch the first time, and a snap the second time. The battery seemed to last forever -- within two hours of JBL’s estimate of 18 hours. As always, the length of charge will depend on what you’re playing and how loudly, but it seems unlikely you’ll run out of juice very often. 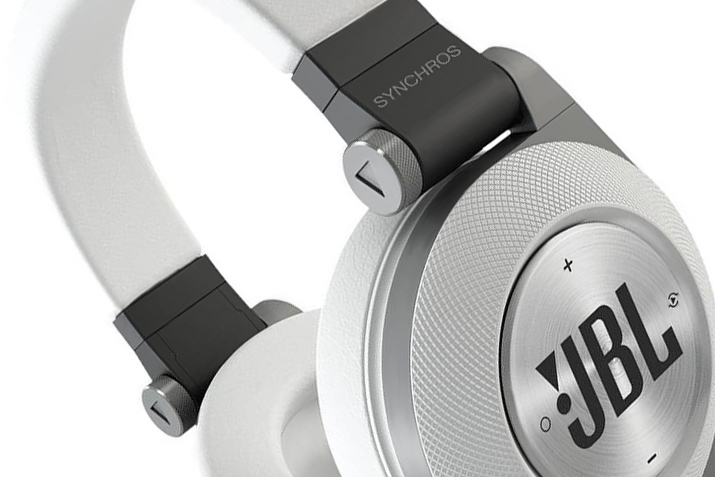 The on/off control was easy to use, especially since the E50BTs provide a confirmation bleep whenever they receive a command. It’s curious, however, that though it changes color to let you know what is going on, the LED is part of the control -- a classy look, but impractical: When you press the button while wearing the ’phones, you can’t see the LED. Better to do what most manufacturers do and put it next to the switch. I did, however, get a perk for using an Apple product: The tiny battery icon on my iPod Touch showed the E50BTs’ remaining battery charge.

The controls on the earcup disc were easy to use and never failed. My fingers quickly found them without searching, and it didn’t require a lot of force -- or too little -- to activate them: just a gentle press. Even the three presses required to jump to the previous track worked like a charm. There was a very slight delay when pressing play/pause, none with the other commands.

It’s a blessing that the Synchros E50BTs blocked out so much outside noise, but be careful when using them in situations where you actually need to hear other sounds. Sitting in a comfy seat on a plane or train, you should have no problem. The E50BTs played very loudly for Bluetooth headphones; even if you like your music loud, you’ll probably run them a few notches short of maximum.

The E50BTs’ overall sound was balanced: rich and full, yet very clean and transparent when the recording had those qualities. Thanks to the large, 50mm drivers, bass was solid as the proverbial rock, but without altering midrange tones (which had good presence) or the highs (which had power but never got harsh). 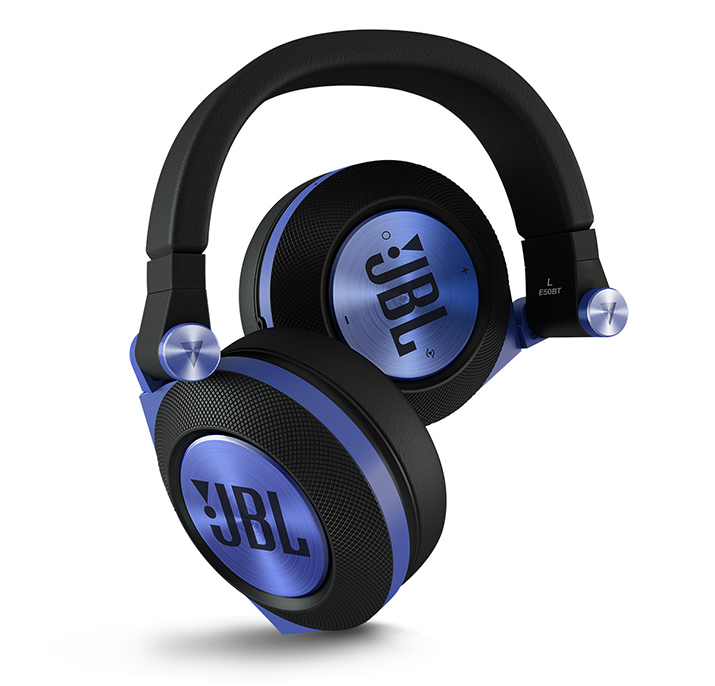 “Goodbye, Columbus,” by one of my all-time favorite bands, The Association, from The Association Live (16-bit/44.1kHz ALAC, Warner Bros./Rhino), had remarkable presence, with good, solid bass and clearly intelligible vocals, Terry Kirkman’s flute providing a delicate obbligato here and there. Turning to something completely different, I played J.S. Bach’s Toccata and Fugue in D Minor, BWV 565, from Leopold Stokowski’s Bach Transcriptions, Vol.2, performed by José Serebrier and the Bournemouth Symphony (16/44.1 ALAC, Naxos). Stokowski arranged this organ piece for a huge orchestra, and all of the components came through with clarity: upper strings sounded sweet but not bright, cellos and basses growled with precision and no bass overhang, woodwinds chirped along most agreeably, and brass glowed with a crowning glory. The JBLs’ tonal balance just slightly favored the bass over the highs, which struck a nice balance with most music.

I listened to a lot of music through the E50BTs; all of it, no matter the genre, sounded very appealing. I also tried listening using the wired connection, and the sound was equally fine. I was impressed at how quickly the JBLs could switch modes: unplug the cable, push one button, beep beep beep, and let’s go Bluetooth!

The JBL Synchros E50BTs are excellent commuter headphones. They sound terrific, they’re extremely simple to operate, and they can be used wirelessly via a Bluetooth connection, or wired with a cable connection. They look stylish, fit securely on the head and ears, and though they have no noise-reduction circuitry, they block a huge amount of exterior noise. The JBLs would make a great gift for anyone who commutes by plane or train but has no defense against the noise of those conveyances -- or do yourself a favor and give yourself a pair. The E50BTs are reasonably priced, and can be found online at a discount.

The only thing I question is the point of having the LED flash when you push it but can’t see it, and the use of a proprietary 2.5mm connection when the rest of the world uses 3.5mm.

JBL’s Bluetooth line also includes the Synchros E40BT on-ear ’phones ($99.95), which look like a smaller version of the E50BTs -- I hope to get my hands on a pair in the near future. In the meantime, happy holiday listening to all!