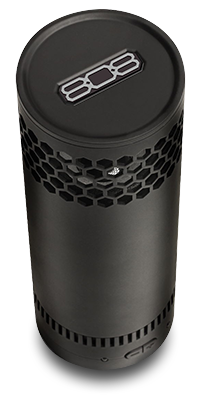 The Bluetooth-speaker craze has inspired designers to be creative. Though the rectangular box, with variations, is still the usual design, many companies have come up with creative shapes that are anything but boxy, and the latest I’ve come across is 808’s cylindrical Hex SL ($59.99 USD). Its clever design allows it to go places other speakers can’t.

The Hex SL’s clear plastic case does much to sell the speaker, letting the prospective buyer see the entire speaker from top to bottom. It comes in four colors: red, white, blue, or black. Also included are a USB-to-mini-USB charging cord, a 3.5mm cord for connecting non-Bluetooth devices, a quick-start guide, and a fold-out instruction manual.

The Hex SL is a cylinder 7.25” tall, 2.5” in diameter, and weighing 13.7 ounces. It feels so firm and solid that I had to check its weight several times -- it felt as if it weighed more. Its body is metal, brushed to feel a bit like felt. Though it feels exceptionally substantial, it fits the hand as if made for it. On the speaker’s top is the 808 logo in bright metal; starting just below the top and extending down 1.25” is a grille of hexagonal holes that goes all around the cylinder and gives you a glimpse of the upward-firing 2” driver. Hanging above the driver is an inverted cone that disperses the sound outward in all directions through the grille. About 1” from the bottom of the case, also going completely around the cylinder, is a vent to augment the bass response.

Below the vent are the controls. At the front are smallish volume up/down buttons. To their left is the blue Bluetooth LED, and to their right is a battery-charge indicator that glows red while charging, green when fully charged. Turn the Hex SL 90 degrees to find a button to press should you have trouble making a Bluetooth connection (I never had to use it), then turn it another 90 degrees to see a USB mini jack for charging, and a 3.5mm auxiliary jack. On the bottom is the master On/Off slider, surrounded by a 0.5”-wide rubber ring that holds the Hex SL in place on a flat surface.

The Hex SL took about three hours to charge; 808 says that a full charge will provide 12 hours of play at “normal” volume. I switched it on, turned on my iPod Touch, selected Hex SL from the list, and the two devices were paired. For subsequent listening sessions, all I had to do was turn them both on and they automatically paired up. The range of Bluetooth transmission was only about 20’ around the house, but that was with many walls and obstructions getting in the way of the signal. The rubber ring worked well -- when I set the Hex SL down on a solid surface, it stayed put and didn’t bounce at all, even when I played loud, bass-heavy music.

I was surprised by just how good the Hex SL sounded. It had fairly crisp highs, a solid midrange, and pretty punchy midbass for such a little guy. I could push it to the top of its volume range for a lot of music, but not all. The heavy bass in “Chains,” from Duran Duran’s Astronaut (16-bit/44.1kHz ALAC, Epic), caused distortion. After I backed off a notch or two, using the iPod Touch’s volume control, everything was A-OK. But overall, the Hex SL played without distortion at the lower threshold of loud, though this will vary with the type of music played. The finale of Edward Elgar’s Enigma Variations (16/44.1 ALAC, Pye/EMI) sounded splendid turned up full blast, with crisp cymbal clashes (loud or soft), pithy upper strings, solid lower strings, and pungent brass. 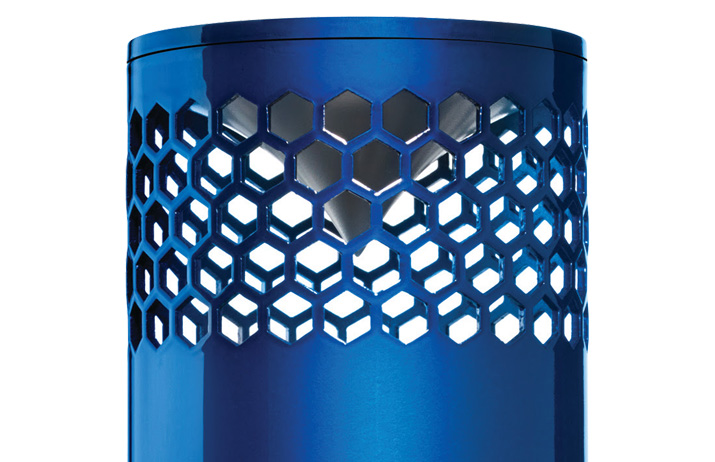 Thanks to the wraparound grille, you can pretty much see as well as hear what’s happening inside the 808. If the driver is bouncing up and down like a respirator, you’ll have to turn the volume down a tad. This doesn’t mean that it won’t play some hard-driving material. “Safety Dance,” from Glee -- The Music, Volume 3: Showstoppers (16/44.1 ALAC, Columbia), worked just fine at full volume, even with its pulsing bass line. 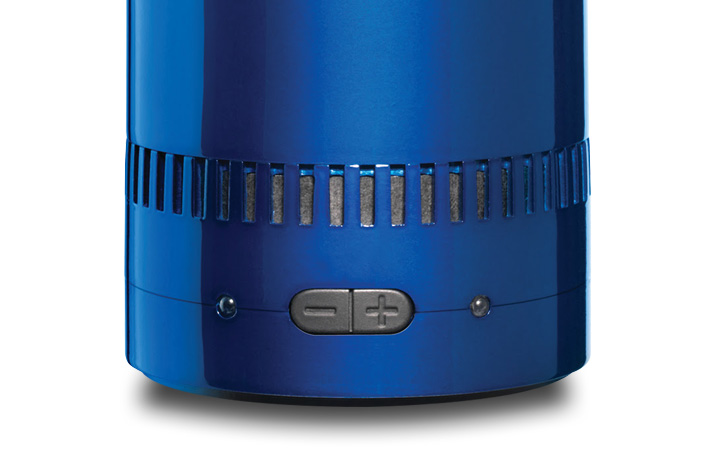 The Hex SL’s 360-degree dispersion of sound worked as you might expect. I could walk all the way around the cylinder and hear the same sound quality, no matter where I was. However, putting the speaker in a cupholder was a bust -- such a container covers up the bass vent. The Hex SL will fit, but you’ll lose a lot of its bass response.

The 808 Hex SL has very good sound, though not quite as good as the small Bluetooth speakers from Logitech, Grace Digital, and Denon. However, if you need a speaker to fit a really small space, I can’t think of one that would work better. You can easily toss it in a gym bag and take it with you to just about any dry location (it’s not water resistant). The price is low, and I’m told that Walmart and other big retailers often offer it at a discount.