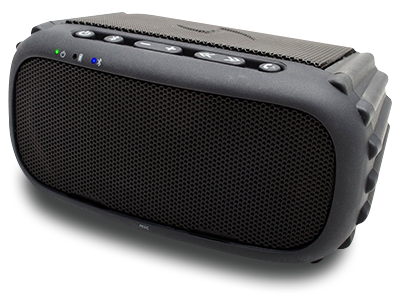 Tiny Bluetooth speakers are popping up like mushrooms. Last month I reviewed Outdoor Tech’s Turtle Shell 2.0, and this month a waterproof model from Grace Digital’s EcoxGear line. For September, Denon waits in the wings.

The EcoxGear EcoRox ($129.99 USD) comes packaged with a USB-to-USB Micro charging cord, a carabiner clip, a user guide, and a warranty card. The EcoRox itself looks like a smaller version of Grace’s EcoXBT waterproof Bluetooth speaker, which I reviewed in May 2013, minus the appealing carrying handles. But the EcoRox doesn’t need handles -- small enough to comfortably fit in the palm of a hand, it measures only 5.3”W x 2.5”H by 3”D and weighs a mere 11 ounces. Its two forward-firing, “full-range” drivers are driven by 6W each and, unusually, there’s a bass radiator that fires up through the top of the case. The speakers and radiator are covered with grilles available in black, orange, or red; the sturdy, rubberized body is black.

The controls run along the front edge of the top of the EcoRox. From left to right, they are: power on/off, Bluetooth pairing, rocker switches for volume up/down and skip forward/back, and pause/play/speakerphone (for answering phone calls). A screw mount on the bottom lets you set the EcoRox on a camera tripod, or connect it to a clip that would allow you to carry your EcoRox on a bicycle.

On the bottom surface of the EcoRox is a connector loop for the included carabiner clip, as well as two jacks: one for the charging cord, the other a 3.5mm auxiliary for non-Bluetooth devices. These jacks are sealed by a lift-off rubber gasket. After charging the battery, it’s very important that this gasket be carefully replaced, especially if you’re going anywhere wet. Be sure that no dirt or sand interferes with the tightness of the seal.

Grace claims that the EcoRox is certified IPX7 and can be submerged in 3’ of water for half an hour. It also floats, and taking it in the shower was a piece of cake. Water off a duck’s back.

The built-in lithium battery takes about 2.5 hours to charge. According to Grace, it will play for about ten hours, depending on volume level. As I write this, I’m at ten hours and the EcoRox is still pumping away just fine.

After charging for 2.5 hours, the EcoRox’s red LED went dark and its green one lit up, indicating a full charge. Pairing with my iPod Touch was a cinch, and I was off and running in very little time. Some posters online have had problems with the EcoRox’s USB port falling back inside its case. My advice is to insert the cord firmly but without undue force.

I liked the way the EcoRox felt in my hand: solid as a rock. The controls all worked well -- firmly, while not requiring much force. Grace claims a 30’ range of Bluetooth connectivity; I got only about 21’, but that was plenty for my purposes, and normal range for a wireless device in my house. One curiosity -- despite its rubberized bottom, the little EcoRox hopped about when fed dominating bass lines. Fortunately, it hopped backward, and so didn’t fall off the table. The solution was to set it on a cloth. Since the passive radiator fires up, not down, this didn’t affect the sound, as it would have with many other Bluetooth speakers.

The EcoRox took some time to break in: 10 or 11 hours of play. And don’t connect the carabiner clip unless you’re going to use it. It picked up vibrations from the speaker, adding some unwelcome zing of its own.

The EcoRox played quite loudly. I took it in the shower with me several times -- my shower head mixes oxygen with the water and can be quite noisy, but I hardly missed a note of Paul Paray and the Detroit Symphony’s performance of Debussy’s La Mer (16-bit/44.1kHz ALAC, Mercury Living Presence). I imagine that the EcoRox will play loudly enough for most situations. I found it to have a clean sound, and particularly good in the midrange -- it excelled at reproducing voices. The highs were pretty sweet, with lots of presence, but never pierced my ears. The bass was about the same as with all of these tiny Bluetooth speakers: good midbass but no low bass -- the bottom octave was missing. But what do you expect? It’s amazing that so small a speaker can put out any bass at all, and the EcoRox reproduced the mid- and upper bass with ease. Overall, the EcoRox was quite listenable with just about any kind of music. 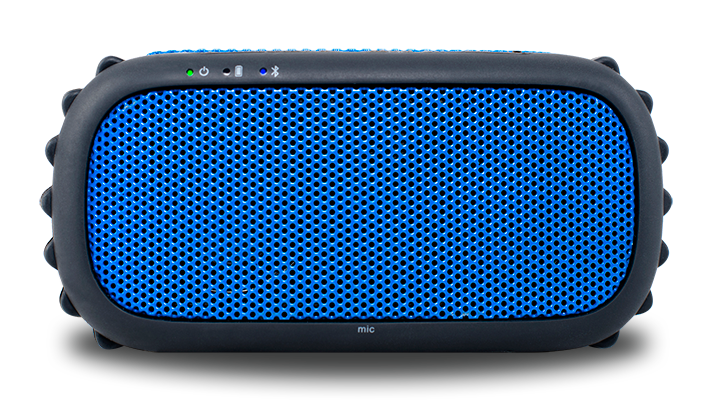 I tried the last movement of Gershwin’s Piano Concerto, with pianist Earl Wild and Arthur Fiedler leading the Boston Pops (16/44.1 ALAC, RCA Living Stereo). The work opens with rhythmic, percussive piano figurations punctuated by drums, cymbals, and bell. It was all clean as a whistle. The lusher sounds of the last movement of Rachmaninoff’s Piano Concerto No.2 -- with Wild again, this time accompanied by Jascha Horenstein and the Royal Philharmonic (16/44.1 ALAC, Chesky) -- sounded just fine. The little EcoRox even caught the air around the strings that’s audible on the LP and CD.

The title song of Jason Aldean’s Wide Open (16/44.1 ALAC, Broken Bow) begins with crisp cymbals and drums, which sounded scintillating through the EcoRox; Aldean’s voice was instantly recognizable and sounded completely natural, and I quite enjoyed this recording. Paul Simon’s voice in “Old,” from his You’re the One, was also naturally reproduced (16/44.1 ALAC, Warner Bros.). In short, there was nothing I played on the EcoRox that didn’t sound made for it.

Grace Digital’s EcoxGear EcoRox is a fine little Bluetooth speaker whose amazingly full sound belies its size -- in fact, for only 4¢ more, it sounds slightly better than Outdoor Tech’s Turtle Shell 2.0. I also felt more comfortable with its more traditional form factor. Also, the Turtle Shell is merely water resistant. That will suffice for most normal pursuits, but if you want a Bluetooth speaker that’s waterproof, your choice is a simple one: Go with the EcoRox. The EcoRox can be found at a substantial discount online, though at the moment it seems to be sold out at many venues. If you have smooth, hard table surfaces, you might prefer the Outdoor Tech -- the EcoRox hops when fed a strong, pulsing bass line, whereas the Turtle Shell’s suction-cup feet hold it solidly in place.

Bottom line: With the Grace EcoRox, you can take your summer sounds just about anywhere you go, and they’ll still sound good.