Having written about Bluetooth minispeakers in January and February, I decided to write this month about a medium-sized Bluetooth speaker. The Philips SBT300 is unique in not having a rechargeable battery; when not plugged in, it’s powered by four AA cells. This has advantages and disadvantages. The SBT300 lists for $99.99 USD; I found mine at Walmart for $44.66.

On the Philips SBT300’s box are printed claims that its “Bass Reflex Speakers [sic] System deliver [sic] a powerful, deeper bass,” along with the information that it’s Bluetooth equipped but also has an audio input for “portable music playback.” The SBT300 comes with a power cord with transformer, and a short user manual in many languages that unfolds like a map and is not very easy to use.

The speaker is 11.7”W x 4.6”H x 6.1”D and weighs 2.75 pounds with batteries (not included) installed. Philips specifies the battery life as five hours, which proved about right. The SBT300 seems to be made of some sort of compressed wood with a matte finish, the latter welcome to me because the glossy black plastic widely used these days attracts dust as quickly as my expensive air cleaner doesn’t. The SBT300 comes in black, white, or red.

The beveled base cants the speaker, and thus the sound, up a bit. Four rubber feet keep the speaker’s position steady and spare your furniture from damage. Also on the bottom is the battery compartment. On the rear are a 3.5mm audio input jack, a jack for the power cord, and the 1” port that qualifies the speaker as a bass-reflex design. The SBT300’s two 2.75” drivers are powered by 4Wpc of continuous output power. 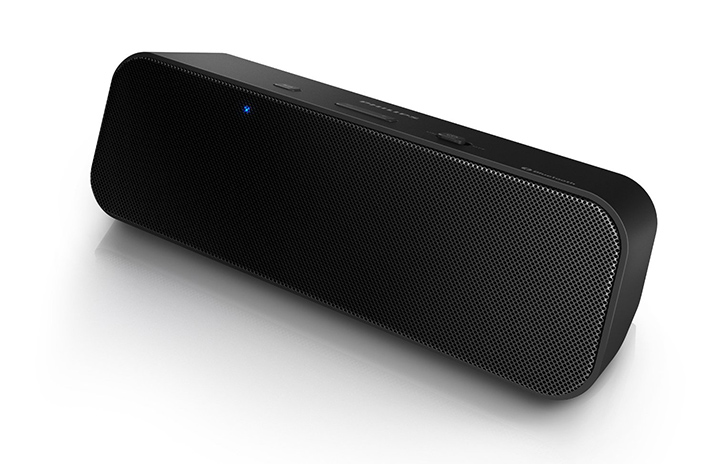 The entire front of the SBT300 is covered with a plastic grille. Slightly protruding from the top of the speaker are three controls: a square on/off slider, a square Bluetooth pairing button that doubles as play/pause, and a rectangular rocker switch for volume up/down.

The speaker has a good, solid feel, with rounded corners to make it look more attractive and modern. Still, it looks a bit RadioShack retro.

The range was pretty much the same as other Bluetooth devices I’ve tried here: about 25’ without dropouts. Walls and tall furniture made a difference, but the solid signal distance I got was more than enough for my purposes. Though the SBT300 is not a portable speaker per se, it’s easy to carry in one hand by using the bass port as a finger hole.

One irritation: The blue LED behind the front grille that indicates a Bluetooth connection is not centered, but off to the right. It also doesn’t go off. If you don’t like it -- and I’ve found a surprising number of listeners who don’t appreciate such indicators -- you’ll have to cover it with a piece of black electrical tape.

At full volume, the SBT300 played loudly enough to fill a small room without an abundance of distortion. Unlike many other Bluetooth speakers, this one’s volume control doesn’t seize the slider control on my iPod Touch -- they work in tandem. I found it best, then, to set the Touch’s volume to maximum, then back off using the SBT300’s volume control.

The sound of the SBT300 was pleasant, if not exactly dynamic. It had a very solid, uncolored midrange, but only adequate bass, and a treble that was ever so slightly rolled off. Once the proper volume level (read: not too high) was established, it produced clean, clear sound without noticeable distortion. The stereo effect was quite good from close up, but the stereo effect quickly diminishes with distance. Overall, the SBT300 sounded better at fairly close range than from a distance, where its sound began to be swallowed up by the room. 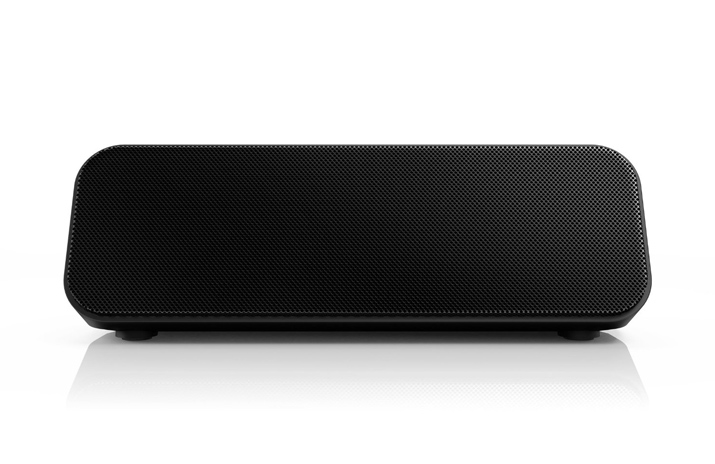 The SBT300 sounded good with most types of music, though it lacked the bass power to make organ or power rock felt. It met all the demands of something like “Eleanor Rigby,” from the Beatles’ Revolver (16-bit/44.1kHz ALAC, Parlophone), presenting smooth voices and crisp if not overly detailed strings. Ben Folds, one of our best contemporary songwriters, sounded just right accompanied by piano and strings in “The Luckiest,” from his Rockin’ the Suburbs (16/44.1 ALAC, Epic). Somewhat surprisingly, the heavier rock numbers on that album also sounded good, allowing for the absence of low bass.

Turning to jazz, “Too Close for Comfort,” with Mel Tormé and the Marty Paich Orchestra, from Mel Tormé Swings Shubert Alley (16/44.1 ALAC, Verve), seemed good for the SBT300. Both Tormé’s voice and the Marty Paich brass sounded clean as a whistle, and the hi-hat cymbals rode along comfortably. Lighter-scored classical music was a delight. “Ye Spotted Snakes,” from Mendelssohn’s music for A Midsummer Night’s Dream, deftly sung by sopranos Jennifer Vyvyan and Marion Lowe and a women’s chorus from the Royal Opera House Covent Garden, and with the London Symphony Orchestra led by Peter Maag (16/44.1 ALAC, Decca), was presented with surprising detail and transparency.

The Philips SBT300 is a very decent, medium-size Bluetooth speaker that’s better than its price might suggest -- which makes it a good value. It pairs easily, is simple to operate, and sounds quite good from close up, where it even gives a decent stereo image. Though its dependence on AA cells instead of a rechargeable battery might at first seem a detriment, consider that the SBT300 might be the perfect speaker for a power outage. When that happens, rechargeables aren’t going to count for much. Our power outages in West Virginia usually last about eight hours: one change of batteries for the SBT300. And provided I have two or so Bluetooth devices charged up, I could make it through the darkness with music all the way. You can also plug the SBT300 into the wall and use it for background music while you work. For the money, I think it’s a pretty good bargain -- especially if you’re prone to power outages.