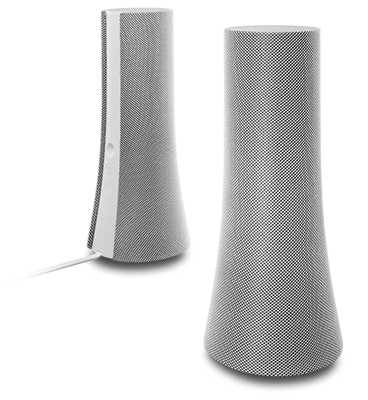 Wireless Bluetooth speakers have become the rage, and ever-inventive Logitech has come up with a new model that is distinctive in a number of ways and has only one minor flaw.

The appearance of the Z600 speakers ($149.99 USD per pair) is bold and striking -- they look like miniatures of the mammoth cooling towers of a nuclear power plant. They stand 9.5” high, with a diameter of 4” at the bottom and 2.75” at the top. The left tower weights about 21 ounces, the right tower 23 ounces. Both seem solidly built.

Except for an exposed white strip at the back, the white plastic bodies of the speakers are covered with a silver-gray fabric that complements Apple’s Mac computers and laptops more than it does the average PC. On the white strip on the back of the right speaker is a column of what appear to be four buttons. From the top: a Bluetooth pairing button, a power button, and then what look like two more buttons, but are actually covers for a USB port and a 3.5mm auxiliary jack. (These need to be pried off with a paper clip.) The only other control is one you don’t see at all: to change volume, you run your finger around the top of the right Z600. A flat, no-tangle power cord protrudes from the bottom rear of each speaker -- though the Z600s get their music signals wirelessly, they need to be plugged into an AC outlet.

Each Z600 contains three drivers, though Logitech doesn’t disclose their sizes or types, and there’s no way to see them without destroying the speaker. At the bottom of each tower is a downfiring passive radiator to help extend the bass response. This is not covered with a grille or mesh; each radiator is exposed to the world -- and possible damage -- and marked Right or Left.

Their AC plugs and exposed bass radiators tell me that the Z600s are not intended for portable use. They’re meant to reside in place somewhere, either as desktop computer speakers or to provide a ready-to-go audio station for your laptop -- as pictured on the box. They’re accompanied by a power adapter, a 3.5mm audio cable, a USB Bluetooth transceiver, a user manual, and the usual warnings and warranty pamphlet.

Now for the bad news: Logitech has come up with a unique set of power connections for the Z600s. At one end of the cord that goes to the AC outlet is a clunky transformer that looks like something from 20 years ago and measures 3” x 1.75” x 1.25”. Using it, you’re going to lose at least one extra outlet because of the size. At the other end it has a socket that fits only the plug on the left Z600. The right speaker is connected to the left speaker. The flat cable is really nice, allowing one to dress the wires fairly unobtrusively, as shown in the photo on the box.

The Z600s are too tall to fit my computer stand, but I did use the Bluetooth dongle to ascertain that it worked. Indeed it did, allowing me to choose the Z600 from my computer’s menu. They paired flawlessly.

The rest of the time I created a work space much like the one in the picture, but instead of a laptop, I used an iPod Touch on which are stored, as Apple Lossless files, 98 of my favorite albums. The Z600 can pair with up to three devices at a time. Pairing them with the iPod Touch was simple and took very little time; after the first pairing of the Z600 and a given device, subsequent pairings with that device take only a second or two.

I found it very easy to reach around the back of the right Z600 to find the on/off and Bluetooth pairing buttons. After doing this once or twice, I could do it without moving the speaker at all. When the Z600 is turned on, a blue LED at the center of the top panel, under its surface, blinks blue. Once connected, it will glow steadily for a second or two, then disappear. Play/Pause and Chapter Skip are controlled from your source device, but you can adjust the volume by touching the top of the right speaker and tracing a circle around the rim to increase or decrease volume. The slider of my iPod Touch changed when I used the Z600 to change the volume level. One of the coolest features of the Z600, this worked flawlessly.

The Z600 turned out to have a surprising range of volume. Turning it up full will drive you out of your office or even a larger space. I ended up setting the volume at about 70%, which gave me plenty of sound with very little distortion. 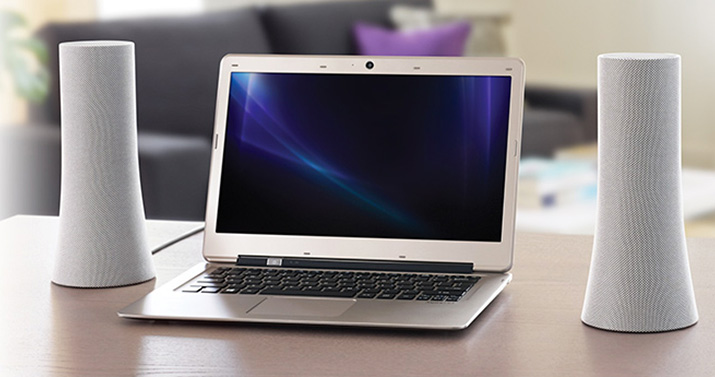 Despite their passive bass radiators, the Z600s’ sound wasn’t bass-heavy, but they were outstanding at handling the midrange and very good with the highs. Though the Bluetooth connectivity was quite good -- I could be pretty far away from the speakers and still get them to work -- I found that they sounded best when I was close to them; e.g., sitting at the workspace I’d placed them on. These were the most transparent desktop speakers I’ve heard, a quality that was impressive from up close, but that dissipated when I was more than a few feet away; the lower midrange and upper bass simply faded away as I got farther away from the speakers.

“Une Nuit à Paris,” from 10cc’s terrific The Original Soundtrack (16-bit/44.1kHz ALAC, Universal/Mobile Fidelity Sound Lab), has one of the busiest yet cleanest mixes you’ll ever hear. This mini-opera opens with bustling street sounds, including a milk bottle that tumbles in the left channel and rolls to the right -- amazingly enough with these speakers, right through my head. The noises continue as the voices enter, and stop only with the sound of a door closing in the right channel. This entire sequence, and the rest of the track, was cleaner than I’d ever heard them through desktop speakers. The sound had almost that artificial clarity you can get through headphones. And so it went with other music, no matter the genre. The midband was clear, the highs were detailed but not too hot, and the bass was good but not overwhelming.

Logitech’s Z600 wireless Bluetooth speakers have striking looks that you’ll probably either love or hate, and play loudly enough to satisfy anyone using happy with the limitations of desktop speakers. Offering transparent sound in a stylish package, they’re simple to hook up, and the price is on the moderate side.