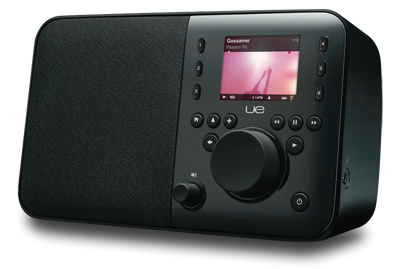 Logitech shocked its followers and fans some months ago by announcing its new Ultimate Ears (UE) line of products and the discontinuation of its Squeezebox models. Owners of the Squeezebox Touch were up in arms, even though Logitech has promised continued support of all Squeezebox models. The UE Smart Radio seems something of a peace offering -- it’s very similar to the Squeezeboxes in many ways -- but the biggest problem is that the UE models use a different operating system from the Squeezeboxes, making them largely incompatible with each other. The UE Smart Radio will more likely sell to new buyers than to returning Squeezebox customers.

Once again, I am compelled to mention the downright seductive boxes that contain Logitech’s new UE products, and the Smart Radio’s box is no exception. The photographs of the unit are almost palpable, and the colored lettering appeals while conveying Logitech’s message: “A world of music at your fingertips, over your Wi-Fi network.” Bravo to the design team.

Included are the Logitech UE Smart Radio itself ($179.99 USD), an AC power adapter, a 3.5mm audio cable, a user guide, and documentation of the product’s two-year warranty. The radio is covered with all sorts of plastic, which should be removed carefully to avoid marring the gloss-black finish. You remove a tab to activate the rechargeable battery, but apparently part of the review sample’s tab was left inside. To fish it out, I had to lay the radio on its back to remove the battery cover, and in the process scratched it. Be careful.

The Smart Radio is gloss black, with black buttons labeled in white. The overall design struck me as retro. The matte-black grille that covers the speaker compartment fits right into the design. An indentation on the back of the case serves as a carrying handle. You slip your second through fifth fingers into this, and place your thumb on the front (being careful to avoid hitting one of the preset buttons). With battery, the UE Smart Radio weighs about 3.5 pounds; it measures 8.6”W x 5”H x 3.3”D.

The UE Smart Radio is a biamplified class-D design with digital electronic crossover. Starting from the left and taking up more than half of the front panel are a 0.75” soft-dome tweeter and a 3” high-power, long-throw midrange-woofer. Occupying the rest of the front are: a 2.4” color display flanked on each side by three preset buttons; below this, a row of six buttons (Home, Alarm, Plus, Skip Back, Pause, Skip Forward); and below them, a large round knob for scrolling through the menu (push this in to make your selection). To the left of this big knob is a Return button that takes you back to the previous menu screen, and to the right a Play button. To the lower left of the scroll wheel is the Volume control, and On/Off is at lower right (push in to mute). In a recessed area on the rear panel are Ethernet and power sockets, and inputs for an external player and headphones. On the bottom, five little rubber feet kept the unit anchored wherever I placed it. The review sample felt solid as a brick.

Setup was simple. Charge the battery (it gives you five to six hours of play). Enter your Wi-Fi network’s name and password, using the scroll wheel, and presto -- you’re in. At least, it worked that way for me. I wanted to play some of the music files stored on my computer, so I downloaded to it the UE Music Library application. I also wanted to try Logitech’s remote-control app, so from the Apple App Store I downloaded that to my iPod Touch. Everything matched up perfectly, with at first no problems.

First and foremost, the UE Smart Radio is a radio, and it comes with an impressive list of stations already set up: BBC, CBC, iHeart Radio, Live 365, MOG, Pandora, Rhapsody, SiriusXM, Slacker, Soma FM, Spotify, and several more. At the heart of it all is Radio by Tunein. Many of the stations are free; others require a paid membership. I have SiriusXM in my car, and found that for only $3 more per month, I could have it on the UE as well. Most of the stations have an introductory offer of a 30-day free subscription -- you can try them and decide which you want to keep. There are thousands of individual stations to choose from, and of every type, from classical to metal. I found at least 24 stations that broadcast Christmas music all year long.

But I had a bit of a problem when I wanted to play music stored on my computer. I have more than 20,000 albums, but the UE Music Library application would load only about 1300 of them. I had the same problem with my Squeezebox Touch when it was new, but now it isn’t a problem at all. Logitech and I are still working on it for the UE Smart Radio. The files that did load played just fine. 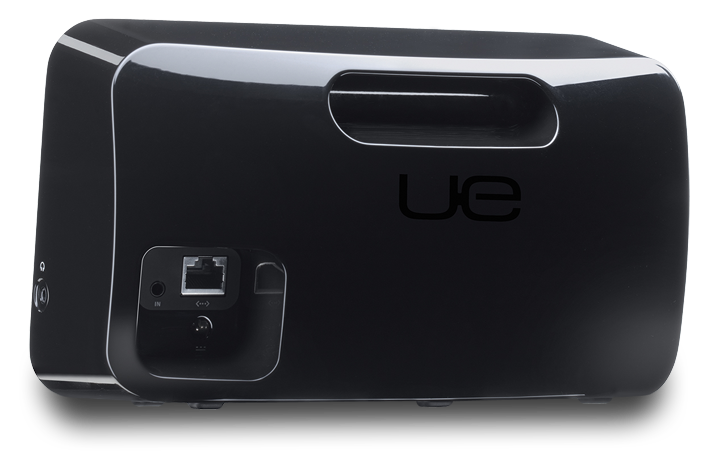 Which brings me to remote control, or the lack of it. You can operate every aspect of the UE Smart Radio with its front-panel controls, but it’s easier to scroll through a library using a remote to find a particular title. Logitech’s iPod Touch app was OK in this respect, but scrolling was still a little difficult. I longed for the remote that came with my Squeezebox Touch: With that, you can enter a letter -- M, say -- and you’ll be taken immediately to that section. In a moment of frustration, I pointed the Touch remote at the Smart Radio and pressed. It worked, 100%. So if you have a Squeezebox Touch, you already have a remote control that will work with the UE. (Other Squeezebox remotes might also work, but I haven’t tried them.) The sleep control, by the way, is worlds simpler to set with a remote. I asked Logitech if they would separately sell a remote control for the UE Smart Radio, but so far have received no answer. I wouldn’t be surprised if the next model includes one.

Logitech claims that the UE Smart Radio is also an alarm-clock radio, but here I think they’ve missed the boat. It’s nice to be able to set your radio to wake you with any exotic station you can find -- you can even have it fade in -- but when the alarm goes off, the already smallish screen switches from displaying the time to art that accompanies the wake-up music. I don’t think I’m unusual in saying that what I most need to know at that point is the time, and without having to squint. Further, you’re supposed to be able to use the scroll wheel as a Snooze button, but you’re given two choices: Snooze, or Turn Off Alarm. You’re likely to get the wrong one. Moreover, if you don’t choose the Snooze option pretty quickly, it goes away.

I was surprised that the UE Smart Radio connected so easily to my network, and was even more surprised at how stable the connection was. I had a few dropouts, but most of those occurred when I deliberately overtaxed the network. The range of operation was impressive. When I installed my Squeezebox Touch, I intended to use it with a wireless connection. But my office and computer are about 30’ from my audio equipment and home theater, with a couple of intervening walls. I kept getting dropouts, and so settled on a wired Ethernet connection. But with the Smart Radio I was able to get a good signal from 60’ to 70’ away, which means that I can take the UE out on my deck or back porch. In short, the UE Smart Radio is truly portable, so long as you have a Wi-Fi network available.

The speaker output is monaural, but it sounded darned good: well balanced and clean, with lots of power; it played very loudly with no significant distortion, until I pushed it all the way to the top. I’m listening to a jazz station right now; Betty Hutton is singing “It Had to Be You.” She sounds natural, the bass line is easily audible, the instruments behind Hutton’s voice are clean and clear: very good sound for a table radio.

There’s no output to feed the signal to your stereo system, just mono or stereo headphone output -- but I have a feeling that’s being reserved for a player down the road.

With as new a technology as this, one must expect problems, solutions, and changes. No doubt the alarm-clock foibles can be corrected with software updates, which you can receive automatically. But it’s probably naïve to think that you won’t eventually have to call Logitech for help. They have a good support line -- not the one listed in the flimsy instruction booklet, but the Squeezebox line: (877) 887-8889. A lot of the support is outsourced, but almost all techs I talked to knew their stuff.

You could get some apps for your phone and a Bluetooth speaker and get mostly the same results as with the UE Smart Radio, but there’s a lot to be said for having everything in the same unit. The UE Smart Radio was almost entirely spot-on at doing what Logitech promises it will do, and makes available a lifetime’s worth of radio stations in very good, listenable sound. Its screen displays sharp if small images, it has killer good looks, is reasonably priced, relatively simple to operate, and comes with good support. I give it a high “Cool” rating. If you like to listen to music in different places around the house, it could be the right radio for you.