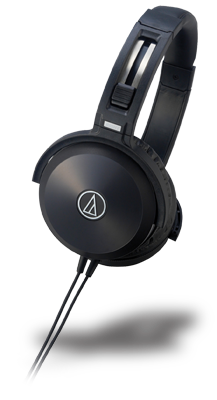 The blurb on the box is dramatic: “Overwhelming Bass.” I wondered if my classical and jazz recordings were going to sound like 1970s disco, but Audio-Technica’s ATH-WS70 headphones -- with, as Audio-Technica puts it, Solid Bass -- proved entirely unthreatening, producing only solid, not overwhelming bass that was just right for most of the recordings I auditioned them with.

In the box are the headphones, their nondetachable cord, a one-sheet set of instructions, and a sheet of warnings and cautions in 12 languages. That’s it -- no carrying case, no adapters, no cleaning cloth, or any other extras that seem to have become de rigueur with headphones. Then again, I’m comparing the ATH-WS70s with other “commuter”-class headphones I’ve recently reviewed -- over-ear models that are still considered portable. In that company, the ATH-WS70s are inexpensive at $149.95 USD, and the lack of a case can be forgiven. You could buy a generic case for them and still be ahead of the game.

The ATH-WS70s are made of aluminum and plastic. They have a very sharp-looking, somewhat industrial design and weigh about 8.1 ounces, a tad more than many others. The earcups are 3” in diameter, with an inside pad diameter of 2”. The earcups are on continuously adjustable sliders -- no détentes. The Y-cord is permanently connected to each earcup; a protective rubber tube covers the wire where it enters the cup. This will probably last a good while under normal use, but I wouldn’t pull or tug roughly at the connections. The earcups pivot 90 degrees to lie flat; trying to turn them more than 90 degrees would result in damage. Folded flat, the pair measure 8.25” x 7.1” x 1.25".

Audio-Technica lists the ATH-WS70’s driver diameter as 1.56”, the maximum input power as 1000mW, the frequency response as 10Hz-25kHz, the impedance as 47 ohms, the sensitivity as 100dB/mW, and the cable connector as a 3.5mm L-type, mini-stereo, gold-plated.

I have fairly large ears, but the ATH-WS70s’ earcups fit around them evenly and securely. The headband’s spring clamped the cups securely to my head -- perhaps too tightly, which turned out to be my only major complaint about the ATH-WS70s. They felt almost entirely comfortable when I first put them on, but as the heat built up, they began to feel quite uncomfortable until my ears were very hot, only 15 minutes later. This effect diminished over several days, and I found a user online who’d managed to bend the headband a bit to loosen the clamp. Better that than have them be loose to begin with! The heating problem will depend on the individual user. I suspect that those with smaller ears will have a better time of it.

The tight fit did block out a lot of ambient noise. I found that higher frequencies were blocked to a large degree; midrange sounds too, but lower frequencies still seemed to get through a bit, though not enough to be distracting. The cord was the right length, and the Y split low enough that there was no feeling of discomfort. As far as I’m concerned, the ATH-WS70s are too big for sports use. You could walk with them, perhaps, but not run or do any gym activity.

Listening levels were just fine; the ATH-WS70s have no controls at all, so it was necessary to adjust everything, including volume, using my iPod Touch. I used the Touch’s Flat setting and stayed with that, as the A-Ts seemed so well balanced tonally.

I had expected the ATH-WS70s to be very good for rock and pop music, not so good with classical. Exactly wrong -- they did best with symphonic music. Frederick Fennell’s famous recording of Walton’s Crown Imperial March (16-bit/44.1kHz ALAC, Mercury Living Stereo) was crisp and clear, with well-balanced highs, mids, and lows. The bass, including the pipe organ at the end, was not at all overwhelming but just right -- totally solid and focused, but not overbearing. The percussion instruments were a special treat: cymbals shimmered, and drums thudded with enough impact to sound realistic.

The drums got me thinking of Earl Wild and Arthur Fiedler’s recording, with the Boston Pops, of Gershwin’s Piano Concerto (16/44.1 AIFF, RCA Living Stereo): It opens with booming timpani, followed by a cymbal crash, then a snare-drum roll, covering just about all the frequencies in the battery section. This was reproduced with near perfection through the ATH-WS70s. When the piano entered, it sounded quite natural across its entire frequency range. The slightly boomy recording was still slightly boomy -- no miracles here, just accuracy.

“Baby Driver,” from Simon and Garfunkel’s Bridge Over Troubled Water (16/44.1 ALAC, Columbia), has a solid walking bass line that certainly sounded great, not at all threatening or overdone, and voices and instruments emerged with great clarity and presence.

I think that Doris Day’s version of “Day by Day,” on the album of that title, is the best version I’ve ever heard of this oft-performed song. It’s a mono recording made in 1956 (16/44.1 ALAC, Columbia), with good plucked bass, tenor sax, and sweet if insistent violins. It all came out well over the ATH-WS70s, and Day’s singular voice was instantly recognizable.

Another instantly recognizable voice is that of Peggy Lee, and stored on my iPod Touch is one of her signature recordings, “Is That All There Is?,” from Mirrors (16/44.1 ALAC, A&M). The music had good, solid bass, airy upper strings, and excellent hi-hat cymbal, all clear as could be. This wasn’t quite so true of my next test track, the title tune of Ben Folds’s Rockin’ the Suburbs (16/44.1 ALAC, Epic). It had lots of low end -- enough to verge on Audio-Technica’s promise/threat of overwhelming bass and to muddy the other frequencies a bit.

I concluded that the ATH-WS70s could push recordings that already border on having too much bass over the top and make them bass heavy. But the ATH-WS70s made most albums -- those recorded with solid but balanced bass -- sound even a little better than what I’m used to.

Overall, the Audio-Technica ATH-WS70 Solid Bass headphones sounded very good with 90% of the music I played. They’re stylish, and except for the cable connection, seem solidly built. They also cost less than comparable headphones. But I couldn’t listen long to them before the heat from the earcups became unbearable. That might not affect you, but it’s something to keep in mind, particularly if you have larger ears. If it’s not a problem, the ATH-WS70s should give you excellent sound from most of your music collection.