Continuing on the topic of compact Bluetooth speakers, a category I’ve been delving into in my past few reviews, I’ve encountered a worthy candidate from Sony: the SRS-XB33. It’s waterproof, dustproof, rustproof, and shockproof, and should prove to be a good companion for outdoor activities. Moreover, it operates in real stereo, sounds pretty good, and has a mesmerizing light show with DJ effects. At $148 (in USD), it’s a strong contender in its price and size class.

Having recently come close to lacerating my hand while attempting to open a plastic clamshell pack, I welcomed Sony’s simple, easy-to-open cardboard box. Inside, I found the speaker, a USB-A-to-USB-C charging cord, a somewhat quixotic quick start guide, and safety and warranty information. The SRS-XB33, which is available in black, blue, red, or taupe, is 10.39″ × 4.96″ × 5.35″ and weighs in at 2.42 pounds. It has extremely good build quality: it feels as solid as that proverbial rock. 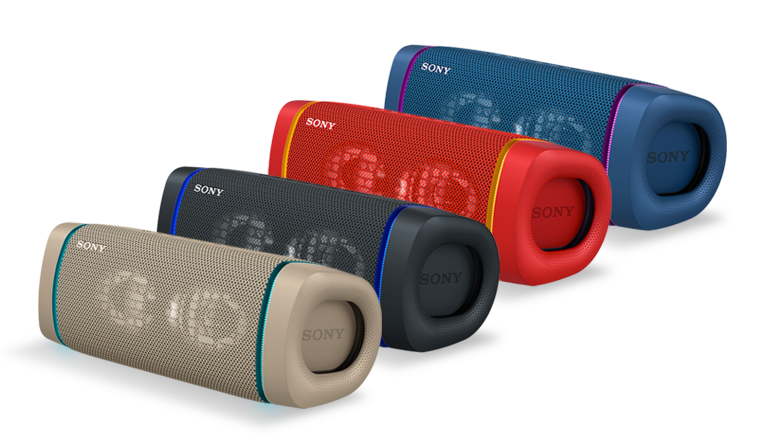 The SRS-XB33 is a modified cylinder with both ends flattened out. It’s covered with a fine mesh grille and has soft rubber caps at either end to protect the passive radiators. The main fabric-covered section of the speaker is separated from the end caps by LED light rings. Rubber foot strips on the bottom of the speaker keep it stationary when you’re playing loud music. There’s a prominent Sony logo on the front of the speaker and less obtrusive ones on each of the passive radiators. The SRS-XB33 has two forward-firing full-range drivers that operate in true stereo.

On the back is a sealed compartment that opens to reveal a USB-C charging port, a USB Type-A port for charging your devices, and three buttons. One button turns the light show on or off, while the other two control pairing the unit with multiple speakers. You can pair the SRS-XB33 with up to 100 other SRS-XB33s for outrageously loud mono sound or with just one other SRS-XB33 for stereo. The cover for this compartment is tethered to the speaker and must be tightly sealed to preserve its waterproof qualities.

On the top of the speaker is a rubber strip containing the controls. The emblems are slightly raised but, unfortunately, the buttons aren't back-lit; however, there are small LEDs to indicate when certain buttons are in play. There’s a power button, and it’s a single click, so you don’t have to hold it down. You’ll hear a quick bleep and a voice prompt when you turn the unit on and no sound at all when you turn it off. Next to the power button is a Bluetooth-pairing button, and next to that, a play/pause button that has several functions, depending on how many times you press it. It can pause playback, start it again, or skip forward or back one track. This button also allows you to interact with phone calls. Next to this button are the volume up and down buttons, and finally, there’s a Live button that activates circuitry to make the sound more immersive. The speaker can be programmed to operate with a more pronounced bass response using what Sony aptly calls Extra Bass. 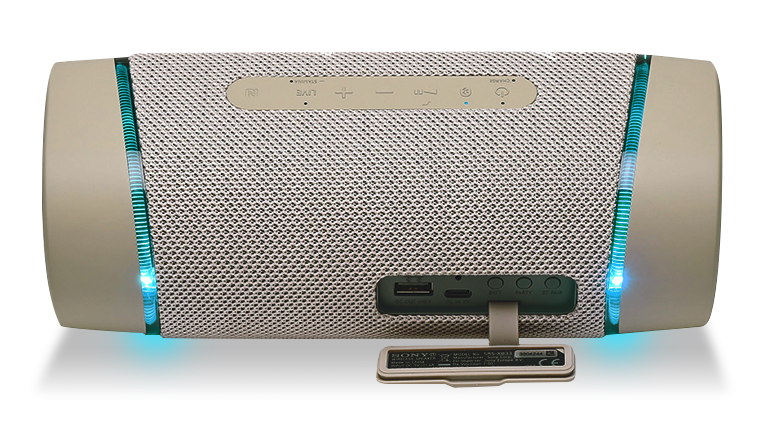 You can download an app that allows you to control sound—Live and Extra Bass—and it also offers users a three-band equalizer. In addition, the app lets you control the light show and access some of its functions, as well as allowing you to insert sounds, including audience applause, to enhance (ahem) your listening experience. The light show is quite an experience. The LED rings around the speaker light up in different colors and often pulse to the rhythm of the music. More startling, the oblong drivers, which look like eyes peering out from behind the grilles, flash like strobe lights. It’s all very impressive, but also a bit eerie.

Sony claims that the SRS-XB33’s oblong drivers provide increased sound pressure and less distortion, in addition to greater clarity and a wider soundstage. If you have an Android phone with NFC technology, you can just touch the speaker with your phone to quickly and securely establish a connection.

According to Sony, the speaker has an IP67 rating. This means that, assuming the port cover is solidly in place, you can submerge the speaker for about 30 minutes, take it to the beach, rinse it off, or even accidentally drop it, and it should keep on ticking.

The SRS-XB33 paired with my Apple iPod instantly and without issue. I found it easy to carry with one hand as the mesh grille provided a good gripping surface. The buttons, though hard to see, had a perfect touch pressure: easy yet firm. It took me about five hours to charge the SRS-XB33. Sony claims 24-hour play time, but I only got about 12 hours with the light show enabled and the speaker playing at very high volumes. Still, that duration was very impressive compared to some other speakers in this price category.

Sony says that this speaker can be used horizontally or vertically. Well, yes it can, but if you stand it vertically, you lose the full benefit of one of the passive radiators. 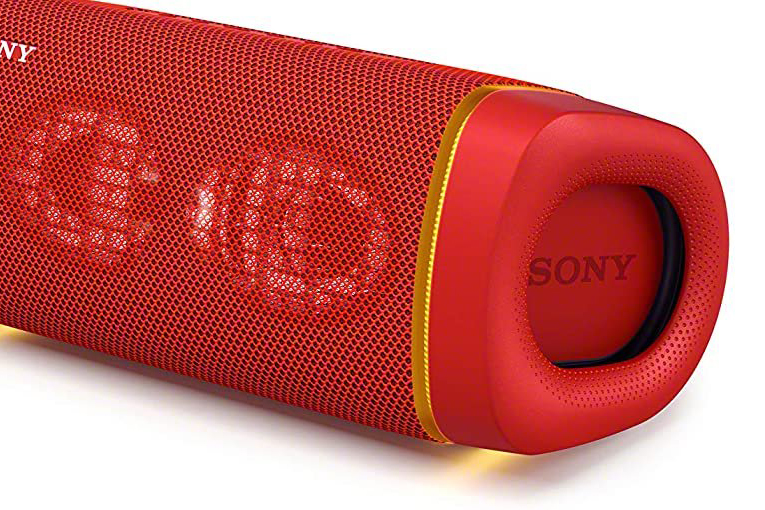 The light show was mesmerizing, though I was a bit spooked by the strobe lights behind the grilles. They might be cool for a rock title, but would I want them peering at me during a Beethoven or Brahms symphony? I think not. Fortunately, you can turn them off using the light button or the app. The latter is quite useful. For instance, you can add sound effects to the music. Say you’ve always felt the second movement of Beethoven’s First Symphony needed some percussion. You can add drum strokes—and you even get a choice of snare, kick, or bass drum depending on where you tap your screen. You can also set the app so that you can activate these functions by merely tilting your device in one direction or another.

I was a little perturbed that Sony didn’t provide a lanyard you can hang the speaker from, and there was no provision for attaching one. So you have to carry this speaker in your hand and place it, horizontally or vertically, on a flat surface.

The sound of the SRS-XB33 speaker might best be described as bright and chipper. It is voiced for outdoor use, so the midrange is emphasized with highs that could sound strident with certain material, and it has a good pulsating bass response. You can emphasize the latter by selecting the Extra Bass setting on the app. In fact, you can tailor your whole sound experience to some degree with this app, and although I was never able to tune it to audiophile standards, I was able to make it sound pretty darn good. It plays fairly loudly and in real stereo. 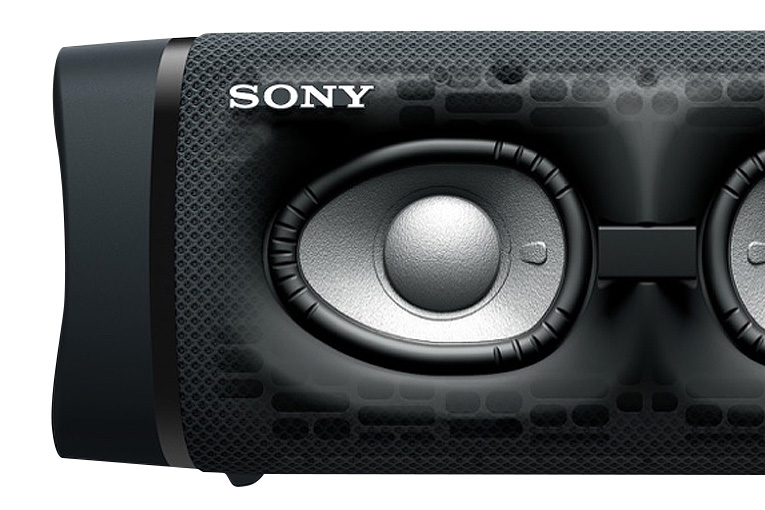 Robert Trevino is making a name for himself as a young conductor to watch. His debut recording from a year ago features the complete Beethoven symphonies with the Malmo Symphony Orchestra (24-bit/96kHz FLAC, Ondine/Amazon Music HD). This proved to be an immensely satisfying listening experience, striking the midpoint between traditional European and revisionist interpretations. The music was always alive and going somewhere: quiet at times, but never a dull moment. The recording achieves a great balance among the string sections, with woodwinds coming to the fore (something I really like in Beethoven performances) and sharply etched brass sounding out from the rear. The SRS-XB33 did an excellent job of reproducing these sounds. The upper registers were clean and transparent, and the only minus was a slight lack of bass due to the speaker’s small size.

George Michael’s “Careless Whisper,” from Ladies Gentlemen: The Best of George Michael (16/44.1 FLAC, Sony/Amazon Music HD), was a massive soft-rock hit for the performer. When played over the Sony, the song had a glowing, large sound, yet overall, it was quite transparent, well focused, and open sounding. There was a solid image of Michael in the center, with warm tonality and impressive bass. The somewhat subtle drum taps were as clean as a whistle and easily heard, with Michael’s distinctive voice floating free in the center of the mix. The saxophone riffs, perhaps better remembered than the rest of the song itself, were warm and mellow. 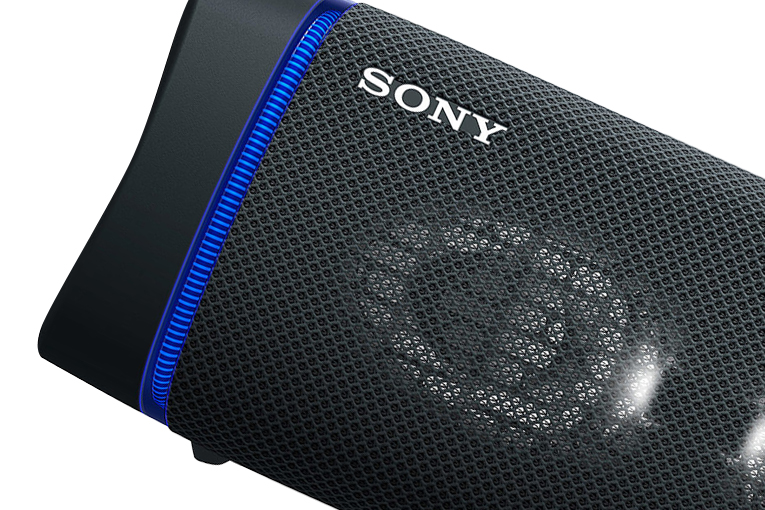 The SRS-XB33 wasn’t quite as successful at rendering Queen’s “Bohemian Rhapsody,” from A Night at the Opera (24/96 FLAC, Hollywood Records/Amazon Music HD). The famous solo with Freddie Mercury and his piano were presented just fine, but later, more histrionic sections of this rock opera hit were clouded with distortion and a lack of transparency. This was due in part, though not completely, to the Hollywood Records remastering, which I’ve always found a little too aggressive and strident. The SRS-XB33 didn’t handle this poorly mastered track very well.

The Sony SRS-XB33 is a great little compact Bluetooth speaker that has a lot going for it. It’s durable, easy to use, and you can adjust it to an impressive degree via Sony’s downloadable app. It sounds very good on most material, but you’ll want to avoid recordings that are overly bright in the first place. The Bose SoundLink Color II, reviewed last month, provides better sound, but lacks all of the SRS-XB33’s appealing bells and whistles. It all depends on what you want.