It’s back to the familiar JBL cylindrical design this month with their newest addition to the Flip series, the Flip 5 Bluetooth speaker. As you might have guessed from the number, this popular series has been around for some time. The new model comes with a few improvements over the outgoing Flip 4, although it loses a few features as well. Still, at $119.95 (all prices USD), it’s one of the best little Bluetooth speakers around.

The Flip 5 comes in a box that’s just a little larger than the speaker itself, emblazoned with JBL’s standard signature product hype. Inside the box, you’ll find a hard black Styrofoam carrying case and inside that, the speaker. In a separate slim black cardboard container, there’s also a USB-A-to-USB-C charging cable and a quick start guide, along with the warranty and safety information. As with previous versions, the Flip 5 comes in a wide array of colors: White, Grey, Teal, Sand, Pink, Blue, Green, Mustard Yellow, Black Matte, Black Camo, Red, and Squad. You can also purchase an Eco version made from recycled plastic, and for an additional $30, you can create your own custom graphics. 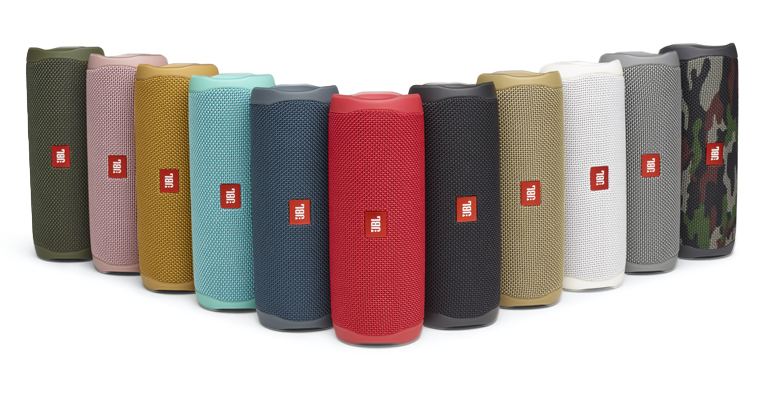 The Flip 5 is 2.7″ in diameter and 7.1″ long, and weighs 1.19 pounds. Waterproof fabric covers the body, which is clamped at either end by a rubberized wraparound clamshell with end caps in the same color as the body to protect the passive radiators. A sturdy shoestring lanyard is attached to one end of the rubberized strip near the bottom. That strip also contains backlit power and Bluetooth pairing buttons, a USB-C charging jack, and an LED battery indicator. Above this are the almost-hidden controls: volume up/down, play/pause, and Party Boost. Using a free JBL app, the Party Boost allows you to pair two Flip 5s for stereo sound or multiple speakers for enhanced mono sound. Note: this feature only works with other Party Boost-enabled speakers, and it won’t work with older JBL Connect-enabled speakers.

The Flip 5 has a very solid build, which gives me the sense that it would survive a drop on a soft surface, perhaps even a hard one, though I would not recommend any in-depth experimentation along those lines.

The Flip 5 has a 1.75″ x 3.125″ active transducer with dual 1.75″ passive bass radiators located at either end of the speaker. JBL rates the frequency response at 65Hz-20,000Hz with a 20W amplifier. Its waterproof rating is IPX7, which makes it virtually splashproof, and according to the manufacturer, it’s able to survive being submerged up to 3′ for up to 30 minutes. The Bluetooth version is 4.2. The JBL app allows you to upgrade and update settings via Wi-Fi and to turn off the navigation sounds. 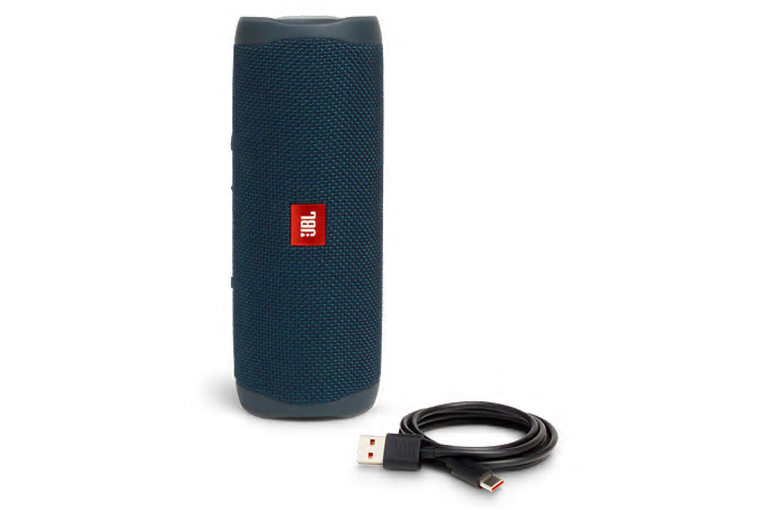 What’s missing? There’s no 3.5mm auxiliary jack since the Flip 5 is strictly a Bluetooth device. There’s also no microphone so there’s no phone interactivity.

The Flip 5 was a delight to use: It paired instantly with my device, and the app downloaded without a hitch. The app immediately informed me that there was a firmware upgrade available, so I downloaded that.

This little speaker fit perfectly into the palm of my hand and was easy to carry around. Its preferred orientation is horizontal: it rocks into position on the rubberized strip and it’s weighted so that, even if it does roll forward, it will roll right back into position. I found I could use it vertically, too, but at high volumes, the passive radiators caused some unwelcome vibration. And of course, I also tried hanging it on a hook in the shower using the shoestring lanyard. Its waterproof rating is high, and I found it functioned without issue in wet environments like the shower. 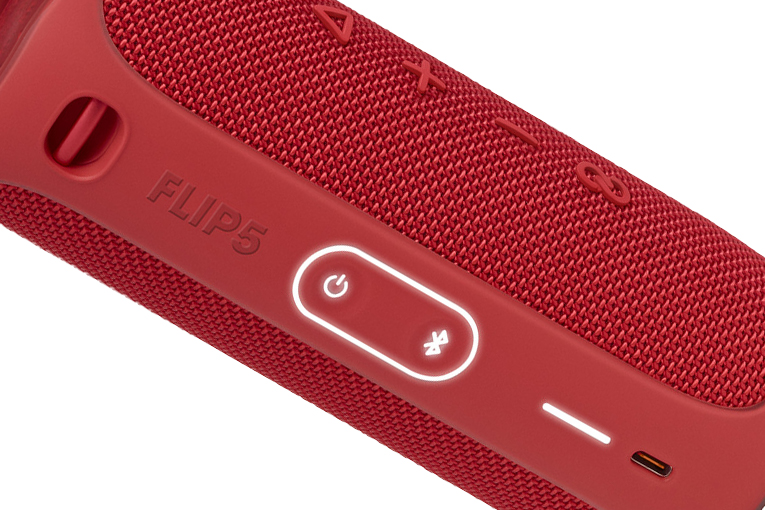 All of its controls worked as advertised. The buttons had a nice click to them and required just the right amount of pressure to make them work. The app is the same one JBL uses for all its newer portable speakers. It seeks out your model, then provides you with information about functions you can tweak. In the case of the Flip 5, the functions are extremely limited—your only options are accepting the upgrade or turning the operational sounds off and on.

Range was about normal for my cluttered little house—I got about 25′ away from the speaker with my player device before I lost connectivity. The battery life varies depending on use conditions. JBL claims up to 12 hours of playtime though the most I could get was about nine hours; that said, I was playing at high volume. The recharge time was very quick: about three hours.

I was astounded at the sound the JBL Flip 5 put out. For one thing, it’s capable of playing at fairly high volumes for such a small unit, and when I used it horizontally, I could push the volume all the way to the highest position without any audible distortion. The bass was solid and focused—the two passive bass radiators worked hard but stayed composed. The main driver produced a midrange sound with lots of vocal presence and highs that were clean and sparkly. I could close my eyes and forget that I was listening to something so small. 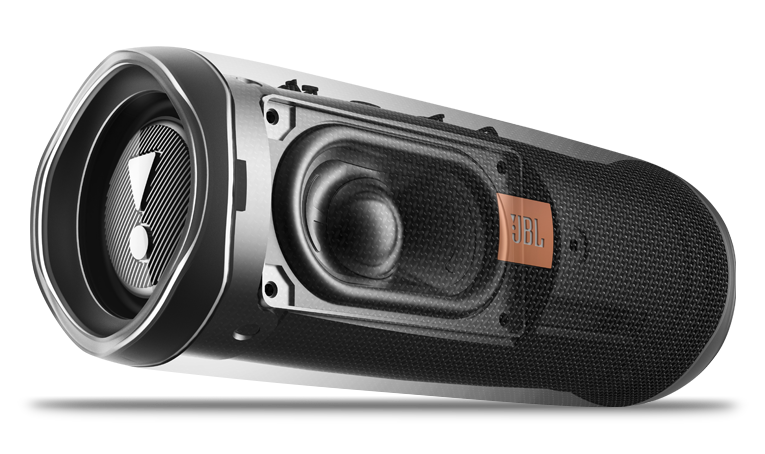 “Baby’s Got a Hold On Me,” from my favorite Nitty Gritty Dirt Band album, Hold On (16-bit/44.1kHz ALAC, Warner Bros/WEA International), is a raucous, thumping country-rock headliner, and I was surprised at how well the Flip 5 handled it. The lowest bass wasn’t there, but there was plenty of midbass and lots of sharply focused drumming to keep things moving. The vocals and upper-frequency percussion and guitars were very present yet had good definition and clarity.

“A Case of You,” from Joni Mitchell’s 1971 album, Blue (16/44.1 ALAC, Warner Off Roster), sounded a little too punchy, so I backed off the volume a bit. When I did so, the guitar and vocals were cleaner and clearer, and the many nuances in Mitchell’s rendering were easy to discern.

The last dance of Ravel’s Daphnis et Chloé (16/44.1 ALAC, Decca), as performed by the London Symphony Orchestra and conducted by Pierre Monteux, is full of sparkly sounds and focused rumblings. It’s a heady, aural kaleidoscope of sound that teases and then challenges the ears. The Flip 5 reproduced most of it with flying colors. The cymbals and other sparkly sounds were clean as a whistle, and the upper bass had good presence and focus, but the lowest end of the bass was missing in action. 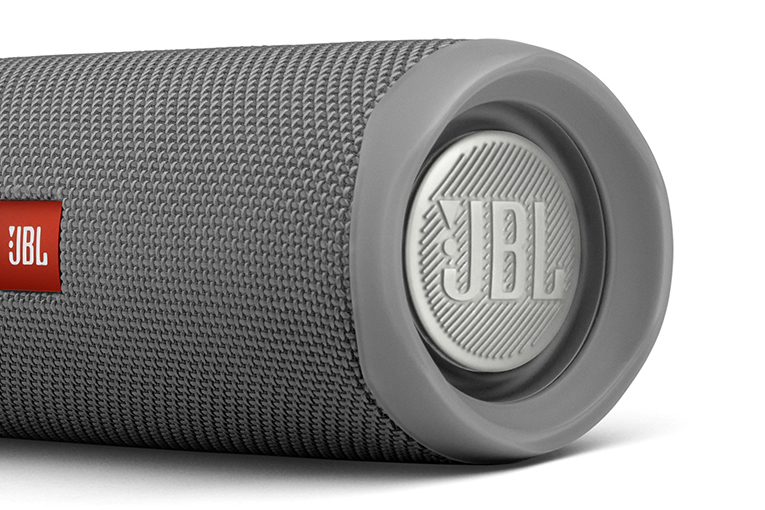 In all my listening tests, I found the best listening experience with the Flip 5 was achieved at an appreciable distance from the speaker—6′ or more worked well. It’s tuned as an outdoor speaker, and if you have it positioned too close to your ears, it can sound a bit too aggressive. This is no fault of the speaker; it’s just the way JBL designed it to do its job.

The Flip 5 is one of the best speakers I’ve heard in its size and price range. It is strictly Bluetooth, so if you want to use a plug-in device, you’ll have to look elsewhere because there’s no auxiliary jack. But almost everything portable these days uses Bluetooth, and the Flip 5 excelled in this capacity. It’s easy to transport and comes with a nice little carrying case, which will keep the passive radiators from being damaged by anything pointy that may reside in your backpack or gym bag. You can get the Flip 5 in almost any color under the sun, and you can even personalize it by creating your own look for a few dollars more. You can find it for under $100 online if you look around; as such, the modest price tag makes it both a highly affable and affordable outdoor companion.