With this innovative product, EcoXGear takes another step toward making sure you have music wherever you go. Their EcoLantern ($129.99 USD) gives you sound or light or both—perfect for campers, it can also be used in the back yard.

Inside its brightly colored box is the EcoLantern, a user guide, and a USB-A-to-Micro-USB link. Especially welcome is the included AC power adapter—increasingly these days, you’re expected to charge a portable speaker from a computer, or buy your own adapter. 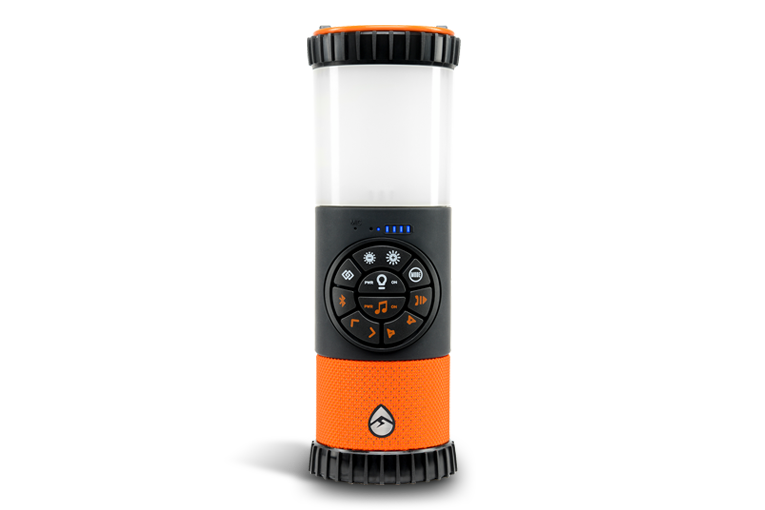 The EcoLantern itself is a cylinder 10.4″H by 3.6″ in diameter, and weighs 27 ounces. Its ribbed black endcaps are of hard rubberized plastic; and hinged and folded into the top cap is an orange handle for carrying or hanging the unit. Embedded in the bottom cap is a stainless-steel bottle opener that looks strong enough to open plenty of brews. The top third of the cylinder, sheathed in translucent plastic, contains the LEDs that comprise the lantern. The bottom quarter is covered all around with a tight-woven orange grillecloth, to allow the single 3ʺ, downward-firing driver to more easily disseminate sound through 360°.

Between lantern and grille is a wide black band with a circular array of 12 control pushbuttons labeled with color-coded icons: orange for the Speaker, white for the Lantern and light show, with separate Speaker and Lantern power buttons at center, the latter both clearly marked Power On. The lantern Power button has four modes: Off, 360°, 180° side 1 (front), or 180° side 2 (back). The other Lantern buttons are plus and minus for brighter or dimmer, and Mode for cycling through five settings: Warm White Light (steady white), Red Light (steady red), Color Fade (slowly cycles through the colors), Music Sync Colors (flashes in time with the music playing)—or, most useful, Emergency (alternately flashes bright red and white). There’s also an EcoConnect button, for pairing two EcoLanterns for dual-mono or stereo sound.

The Lantern controls have no voice prompts, but when you press Speaker Power On you’ll hear “Speaker on, ready to connect.” A tiny blue LED above the button array then blinks until you’ve paired the EcoLantern with your Bluetooth device, after which it glows steadily as the voice tells you that pairing is complete. To the left of Speaker Power is a Bluetooth button for manual pairing, and counterclockwise from there are: Previous and Next track, volume Down and Up, and Play/Pause/Answer. Press and hold that last button to connect to your voice assistant. Next to the Bluetooth LED at top are four blue LEDs that indicate the status of the battery charge. 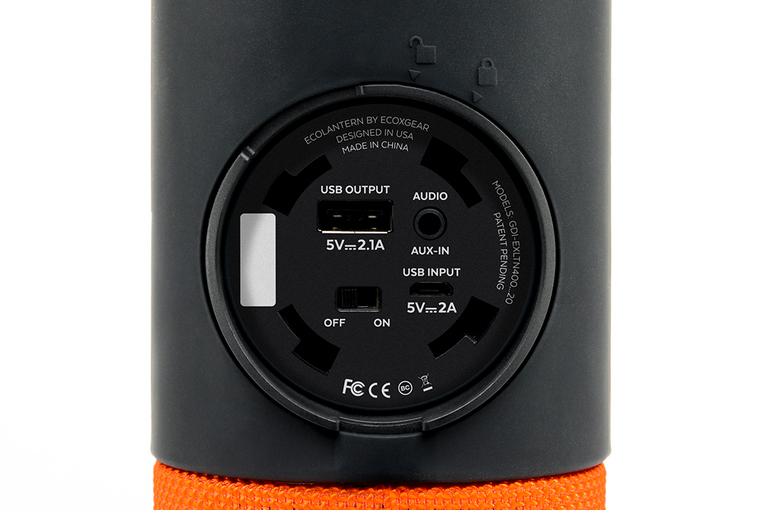 Opposite these controls, on the other side or back of the EcoLantern, is a waterproof compartment. Unsealed, it reveals a master on/off switch, a Micro-USB charging port, a 3.5mm auxiliary audio input, and a USB-A port for charging a device. This well-designed compartment must be closed tightly to make the EcoLantern meet its water- and dustproof specification of IP67.

The Lantern and Speaker controls can be used entirely independent of each other, with the obvious exception of Music Sync Colors. EcoXGear specifies that the EcoLantern has Bluetooth v.4.1, a 5W amp for its driver, and, on a full charge of its lithium-ion battery, a maximum Speaker playing time of 20 hours at 75% volume, or four to 24 hours of lantern illumination, depending on brightness and mode. (Keep in mind that EcoXGear’s battery-charge claims are always conservative.) The claimed charging time is about three hours. The lantern’s white light has a brightness of up to 400 lumens and a color temperature of 4000° Kelvin. As for Speaker specs, the EcoLantern has a frequency range of 125Hz-18kHz, ±3dB, and signal/noise ratio of 88dB.

The EcoLantern was a lot of fun. Unlike most decorative, atmospheric light speakers, it provided a genuinely useful amount of white light that I found easy to read by. The 180° settings are a nice touch: Say you’re walking down a path and want to be able to tell the leaves from the copperheads—you can light the path before you without glare being thrown back in your eyes. I doubt I’d ever use solid white or solid red, but the party mode, which flashes in sync with the music played, can be fun. Emergency mode is a very useful feature when you run into trouble, whether in the woods, on the highway, or during a power outage. It flashes brightly enough to be seen from a long way away.

The EcoLantern sits stably on its base or can be hung from its handle. That handle also makes it easy to carry around, though I found that for short distances I could easily grasp the cylinder in one hand. And the comprehensive instruction manual is much more than a quick-start guide. 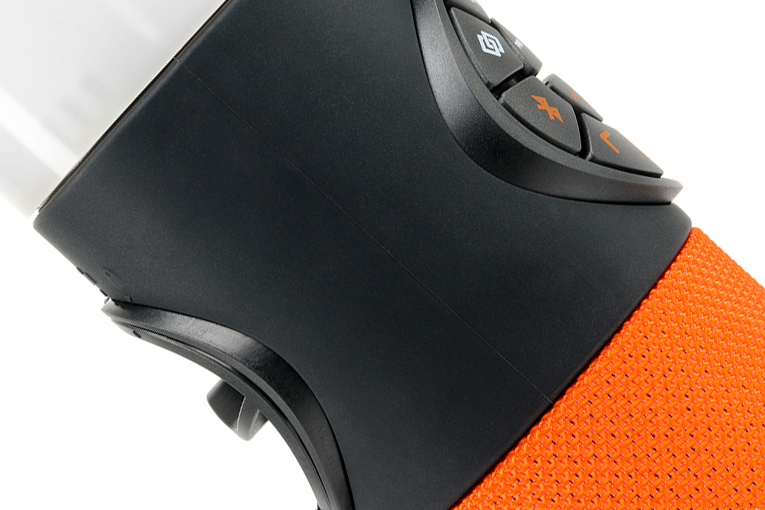 My only disappointment is that the EcoLantern’s controls aren’t backlit. You can only assume that anyone buying such a product plans to use it often in the dark—but you need to be able to see its Lantern Power On button to turn the thing on. You’ll quickly be able to find this button by feel, or you can use your phone’s flashlight, but a built-in visual assist would’ve been nice.

The EcoLantern played reasonably loud, and was voiced to sound good outdoors: The midrange was basically neutral, making voices easily intelligible, the highs were clean, and there was more bass than I’d expected. I got the impression that the EcoLantern was designed to provide music for campfire gatherings, for which its 360° dispersion pattern is appropriate—but that means it doesn’t project sound in any one direction with great sound pressure levels.

But while the EcoLantern isn’t a hard-rockin’ speaker, it did very well with some rock—though of course “very well” will depend on whether or not you can do without the lowest bass. In the title track of the Eagles’ Hotel California (16-bit/44.1kHz FLAC, Asylum/Amazon Music HD), the rhythm relies primarily on drums, bass, and guitars, which came through with force and accuracy; and lead singer Don Henley’s voice had just the right amount of weight. All in, this made for satisfying listening through the EcoLantern. 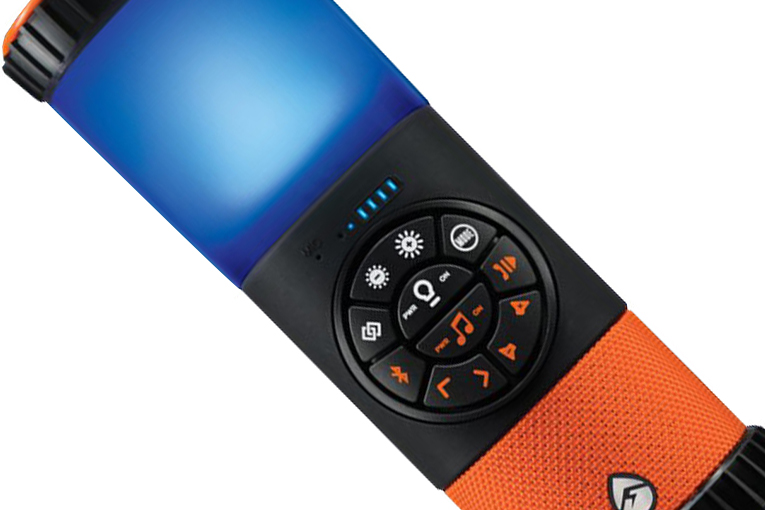 The Pines of the Villa Borghese, the first movement of Respighi’s The Pines of Rome (Herbert von Karajan, Berlin Philharmonic; 16/44.1 FLAC, Deutsche Grammophon/Amazon Music HD), uses all the upper-frequency instruments of the orchestra, including blasting trumpets and jingly percussion. The latter sparkled through the EcoLantern with more high-frequency extension than they had any right to. The sound was scintillating. I missed the rumbling bass in the second movement, Pines Near a Catacomb, and the rest of the work, but most of the time the EcoLantern’s solid lower midrange made up for the lack. This is a recording I listen to through my main system, and while there was no comparison, hearing it through the EcoLantern still reminded me of its grandeur.

Harold Adamson and Jimmy McHugh’s “Too Young to Go Steady,” on Karrin Allyson’s Ballads: Remembering John Coltrane (16/44.1 FLAC, Concord Jazz/Amazon Music HD), presented the EcoLantern with some challenges. To avoid distortion, I had to back off the volume about 3dB; at the higher volume setting, Allyson’s voice and the tenor saxophone, piano, and drums had been nicely balanced, but now I really missed John Patitucci’s double bass—its absence fatally changed the character of this performance. I found that with tracks that distorted, it was best to reduce the EcoLantern’s volume a few clicks to restore a more pleasing balance.

EcoXGear’s EcoLantern is a unique product that fulfills multiple needs. Its lantern puts out a lot of bright light in a variety of modes, the Emergency flasher being particularly useful. In terms of Bluetooth operation, it sounds quite good, if not perfect, with most types of music—certainly good enough for listening around a campfire—but falls a bit short if you want to blast music loudly in a specific direction. With the EcoLantern, you can also take phone calls and use your voice assistant. About the size of a large water bottle, it easily fits into a backpack or carry-on bag. Though a bit pricey at $129.99, it comes with a three-year limited warranty, and can be found on Amazon for $20 less. If you want bright light and music in the round, this is the portable Bluetooth speaker for you.